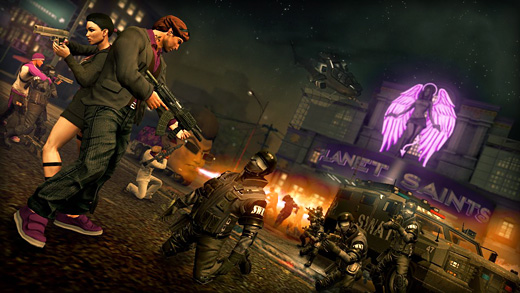 The KmartGamer E3 team visit to the THQ booth had a common theme: violence. Gunplay and fisticuffs ruled the experience, and we saw some titles that will make a definite impact at retail over the coming months.

The first game that we got a glimpse of was Warhammer: Space Marine, which is being put together by Relic Studios. In our brief time watching the game being played, the thing that stood out was the combat system and quick transitions from brutal melee combat to ranged attacks. I'm personally unfamiliar with the Warhammer IP, but I can see how this game is a different take on the popular tabletop game. It's violent and full of action, yet it remains true enough to the source material that fans of the series will instantly recognize a lot of characters, places, and intangibles.

The highlight of the tour was a theater showing of Saints Row 3. I'm not usually one for sandbox games, but Saints Row 3 goes so over the top with its content that it's hard not to want to at least play it. Delivering DDTs or kicking passers-by in their unmentionables looks like guilty fun, and that's before beating them with a certain purple personal pleasure toy or calling in airstrikes to dispatch large groups of enemies. Car handling looks smooth, and then flying the VTOL really hooked my interest. The game looks to deliver a lot of content and a metric ton of things to do, either during missions or just on the fly. My interest in Saints Row 3 jumped considerably after the presentation and it was one of my highlights from the show, despite not having any hands-on time with the game.

Before leaving, we got a look at UFC Undisputed 3 in another theater showing. MMA fans should start getting excited now, because Yuke's looks to have added a ton to this sequel. 150 fighters and separate weight classes, the inclusion of Pride, and the promise of more accessibility for less-skilled players seems to make it a far more attractive game than Undisputed 2010 was. Waiting until next year may be disappointing for many, but with the extra development time to polish the experience and make it better, things look very positive for this title.

The THQ experience at E3 was a strong one. Saints Row 3 was definitely the highlight of the booth, but titles like WWE 12, UFC Undisputed 3 and UFC Personal Trainer, and Warhammer: Space Marine look to be great additions for THQ as the publisher continues through its fiscal year.