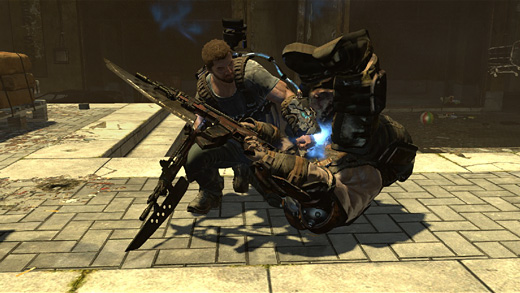 Heading into my trip to E3 with the KmartGamer team, I was looking forward to my meeting with Namco Bandai. I had high hopes for Ace Combat: Assault Horizon, plus games like Dark Souls and Soul Calibur V were high on my interest list. I got to see and experience a lot of games during my time with Namco Bandai, but when my time was up, I had mixed feelings.

The first game that I got hands-on time with was Ace Combat: Assault Horizon. My first thought was that it's a better-looking game than its predecessors. That's high praise, considering that I have enjoyed every game in the series so far. The game plays fast, the frame rate is smooth, and it's got a gritty feel to it. At first, the game played with familiarity. Flying the aircraft felt a little too sensitive at first, but I quickly compensated for this and took down a few enemy planes with missile strikes. Things were going well, until I had to enter the close combat "dogfighting" mode. Getting into this mode requires players to keep the target directly in front of them at close range and press the L2 and R2 buttons. It's not at all intuitive and really ruins the experience that Ace Combat veterans have enjoyed for years. I understand not wanting to do the "same old thing", but this… this is broken. Worse yet, the experience was damaging enough to kill my personal excitement for the game despite the other positives it has.

Next up was observation time with Inversion, a third-person shooter set for release next year. It's easy to think of Inversion as just being another shooter, but the use of gravity in the game really does add a unique component to the game. Players can use the environment to their advantage at will, summoning lava or pulling off gravity tricks which seemed a bit similar to Bulletstorm. Enemies can be tossed into the air or grabbed from a distance and pulled towards the player. Perhaps the most interesting part of what I saw was that gameplay can take place on walls or even on ceilings above the action due to gravity changes. Standing on a wall, players have to adjust their approach to combat. Inversion shows promise in a sea of similar shooters. 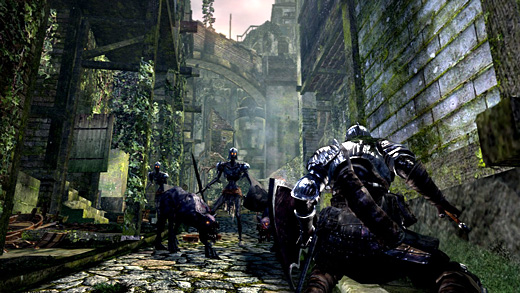 Dark Souls was my next destination, and I can already tell fans of Demon's Souls that this game is going to be as good as advertised. From Software has ratcheted up the difficulty; in fact, the person who demonstrated the game for me was having a difficult time staying alive himself. The visuals looked about on par with Demon's Souls to me, but graphics were never the strong point for either game. It's about the combat, the challenge, the setting and the online functionality. If you're going to be getting this game in October, I highly suggest buying a replacement controller right away. That way, when you break your controller out of frustration, you'll have another right away.

Earth Defense Force: Insect Armageddon brings back the bugs with improved graphics and a new squad/class mechanic. Taking down the ant hordes is still fun, and the visuals have been tightened up for this sequel. Unfortunately, I wasn't sold on the classes and squad mechanics. That's probably more a matter of personal preference, but I felt like it impeded on my ability to just pick up and play the game. Co-op fans will probably like this, and the $40 price tag should be inviting for many.

While playing Earth Defense Force, I was tapped by my Namco guide who beckoned me into a small room where Soul Calibur V was being demonstrated behind closed doors. Producer Hisaharu Tago was in attendance for the demonstration, which showcased four fighters. The two new ones, Patroklos and Pyrrah, the son and daughter of Soul Calibur's Sophitia. Siegfried and Mitsurugi were the other two characters. The move sets for all of the fighters were largely pulled from Soul Calibur IV, but there were a few new tricks to be seen, including special moves that could be triggered after a "special meter" of sorts was filled up. Soul Calibur V will be taking place 17 years after the events of the last Soul Calibur game, and returning characters will show this difference. Mitsurugi looked to be more affected by the age change, with longer locks and a bit of graying. Despite the age, both characters still maintain their fighting skills as I saw in several matches as demonstrated by a Namco employee.

A few nuggets of information pulled from the presentation included: 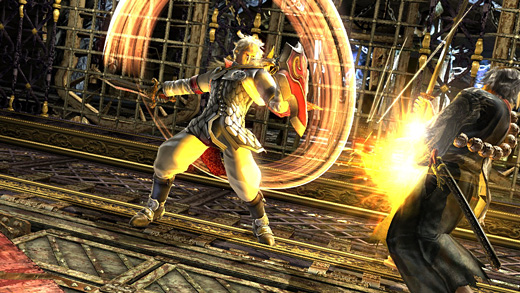 I did ask Mr. Tago if there was a more specific targeted release date and he laughed, adding through an interpreter, that the development team knows that fans are very excited to get their hands on Soul Calibur V and that they're working very hard to deliver that experience as quickly as they can.

Even at this early stage of development, there's a lot to be excited about when it comes to Soul Calibur V. The visuals have already taken a step forward and the new character designs for Pyrrah and Patroklos look great. It's going to be a long but hopefully worthwhile wait for the tale of souls and swords to be retold anew in 2012.

One last stop on the Namco tour led me to Galaga Legions DX, which is scheduled to see release for Xbox Live Arcade and the PlayStation Store sometime this summer. Although Galaga Legions never resonated with me, Galaga Legions DX is a different animal. The game has evolved into a twin-stick shooter, a la Geometry Wars or Super Stardust HD, and the focus is now on eliminating enemy waves as quickly as possible. There are definite parallels between Galaga Legions DX and Pac-Man Championship Edition DX, as players are battling the ticking clock more than avoiding death or dispatching enemies. Once that timer starts running, it's a race to find the quickest way to wipe out enemy waves of ships. Some waves will have an enemy with a bomb that takes out the whole squadron; others require watching patterns to effectively kill them off. It's expected that Galaga Legions DX will release for $10 (800 Microsoft Points) when it lands this summer, and I'll be reviewing this game for certain.

My Namco experience, as you can see, was a mix of excitement and disappointment. Soul Calibur V and Galaga Legions are now squarely on my radar and my anticipation for Ace Combat: Assault Horizon has been dashed considerably. There were even more games that I was unable to cover in the time allotted, like Tekken Tag Tournament 2, White Knight Chronicles 2, and others. It's good to see that Namco has so much on its release schedule, and the publisher looks to be giving us lots to talk about well into next year.