The middle day of festivities at the Electronics Entertainment Expo here in Los Angeles was an exceptionally busy one. This entry is part one of two, as there were eight hours' worth of meetings and booth tours that took place. 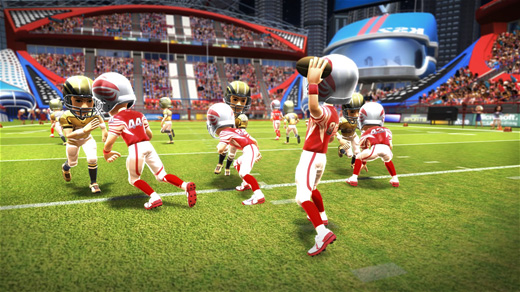 The day started with Kinect demonstrations in the Microsoft zone. Kinect Sports: Season 2 really impressed me. I know that I have been less than enthusiastic about motion controls, but this game does a lot of things well—even though it's still early. The Football demonstration challenged us to come back from a six-point deficit and march down the field using only four downs. The plays are fairly elementary, but the demo shined when the Kinect sensor was used for voice recognition and body tracking for the player who was the quarterback. The QB has to squat down into a position to receive the ball from his center, and the word "hike" triggers the exchange. Including football as part of the Season 2 package is a big selling point for the game as football is extremely popular. Golf was equally impressive as the velocity of the golf swing translated well to the eventual reaction of the golf ball that was struck. Season 2 has former members of EA Sports on its development team, so this is one game that I'll be paying closer attention to as we draw closer to its Winter 2011 release window. 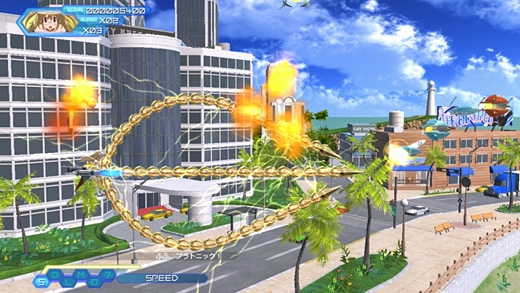 A trip to the Konami booth was next on the agenda, and the publisher's slate of upcoming games has a lot of variation to offer. Neverdead has the rather unique premise of using the protagonist Bryce's limbs as weapons and offering an environment that's largely destructible. Bryce can also separate his head from his body to solve certain puzzles, but if you lose your head, you're as good as dead. I also spent some time with Otomedius Excellent, which is a Gradius derivative and will be available later this summer. It's a shoot'em-up, as you might expect, but the ships are… people. It's hard to explain, but as long as you keep on shooting, you'll be OK. I also got to try a little bit of Frogger 3D on the 3DS, which seemed to hold true to the basics of the arcade original, but uses the 3D technology to show height and depth. 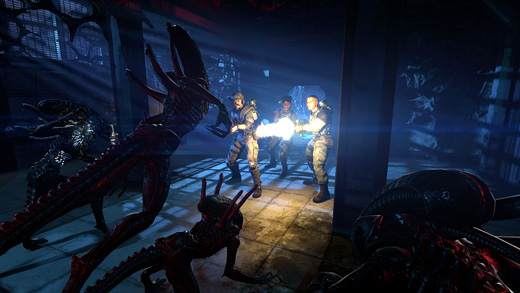 SEGA was the next stop, and with it came a demonstration of Gearbox Software's Aliens: Colonial Marines and some hands-on time with Sonic Generations. The line to see the Colonial Marines demo was long, but it was easy to see why after seeing the demo myself. It's a matter of survival as you mut defend yourself from the angry xenomorphs. One of the new xenomorphs that was introduced was one that essentially comes with a shield as part of its body; players are forced to rely on different tactics tom progress, and that's where the demo ended. The game looks, even at this early stage, to continue Gearbox Software's successful run of games. Turning to Sonic Generations, SEGA and Sonic Team have keyed on speed and nostalgia—along with the addition of stereoscopic 3D—to fuel this latest Sonic effort. Some of the newly-imagined Green Hill Zone felt a little too automated, but there's no mistaking the obvious retro feel that Sonic Generations is after. It's "old meets new", and that formula is working at this stage.

There's a lot more to share, but time is short as the KmartGamer team has another early start coming up. As blog posts continue over the next few days, expect to see special content, including:

Look for continuing updates over the next few days, including news from meetings with Square-Enix, Sony, and Take-Two, which are slated to happen today. Stay tuned to my Twitter feed for quick blasts and reactions to meetings as they happen. For now, time is short and it's time to reload for one more full day's experience here at E3.

Disclosure: As a part of my participation at E3 2011 on behalf of KmartGamer, Sears Holdings provided my travel and accomodations.