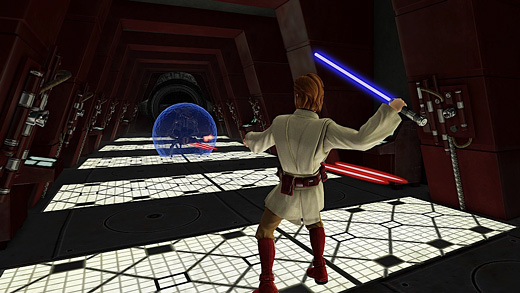 After three consecutive nights with three hours of sleep apiece, walking into a closed meeting room at 10am and seeing Star Wars Kinect didn't seem to show much promise. After all, other sites had been less than kind to the game and the reaction during Microsoft's press conference wasn't exactly warm. When I volunteered to test the game for a group of my peers and the other members of the KmartGamer team, I didn't have high expectations… but when the demo was over and my pulse was racing, I wanted more.

The demo had two different modes of play: Jedi Training and Jedi Destiny.

Jedi Training is just as it sounds; Yoda guides the player through the control basics, including using the Force, lightsaber combat, and basic movement. It's hard to put into words how cool it was to wield powers like Force Push and, by just using your left hand, thrust battle droids away from you. These powers have always been associated with simple button presses in the past, but with Kinect's body tracking abilities, players can execute actions as though they really are "in the game". Moving a downed ship from spot to spot requires more concentration (at least in theory), so both hands are used to guide the ship to its destination. It almost requires players to think like the character that they're portraying; even the most skilled of Force wielders can't just zip a large craft from one place to another; slower, more deliberate movement is needed. That's what is expected and works best when performing the same action in Star Wars Kinect. Lightsaber controls are dictated by the right hand, and the tracking seemed spot on; side to side slashes, vertical cuts, and even more elaborate twirls and twists were all registered by the Kinect sensor and brought to life on the big screen.

Jedi Destiny puts the player's training to practical use in the Cloud City of Bespin. The city is in turmoil, taken over by battle droids, and it's up to the player to stop the invasion of the Trade Federation. The action is on rails—much like Sega's Star Wars Arcade— but it's no less fun. Combining force powers and lightsaber skills, I dispatched plenty of droids and felt unstoppable as I was able to use Force powers and lightsaber skills at the same time. Facing Destroyer droids was a more difficult task, as extra body movements were required to leap towards and over them to get an advantage. Some of the body tracking movements for side rolls and jumps did feel a little inconsistent; they were great when they worked, but the on-screen character would have been full of holes when they didn't. Thankfully, dying in the demo wasn't possible. I did manage a couple of impressive feats, including taking down three battle droids with a single Force Push action (something that our LucasArts guide hadn't yet seen before), while making my way from Bespin's exterior to inside near the infamous dining room where Lando's betrayal takes place and various corridors.

The demo concludes inside of the Carbonite Chamber. Two hooded Sith warriors appear out of the darkness, each dual-wielding lightsabers. I stood, ready for battle… and the demo ended there. I was tired, but exhilarated. I felt like a Jedi, minus the physique and droid companions. I wanted more, but that desire would have to wait.

I completely understand that some people are expecting more out of Star Wars Kinect. After all, the arcade experience has been all but dead for years and players seem to be looking for something more. Conversely, I had an absolute blast playing the demo. The game represents a chance to get closer to unleashing your inner Jedi than ever before without the need to hold a controller or learn a button layout. Most of the controls were intuitive and easy to learn. It's an accessible experience, even at this early stage, and we still don't know all of the content that we be included in the retail version when it lands this holiday season.

I'm more excited for Star Wars Kinect than I was going into E3, and, to me, that indicates that the demo was a success. It wasn't perfect, but I'd be lying if I said that I didn't enjoy my time with it. The arcade experience shouldn't be considered a detractor; if you are willing to look at the game for what it is—instead of what you think it should be—I think that there's plenty of fun to be had later this year.