After weeks of waiting—the E3 experience finally got underway on Tuesday.

It was an early start (5am, to be exact), but after a breakfast with some awesome people—including a conversation with James Stella, Sears Holdings' Divisional Merchandise Manager for Movies, Music, & Video Games—it was off to the L.A. Convention Center to pick up our E3 badge holders and shoot some video. 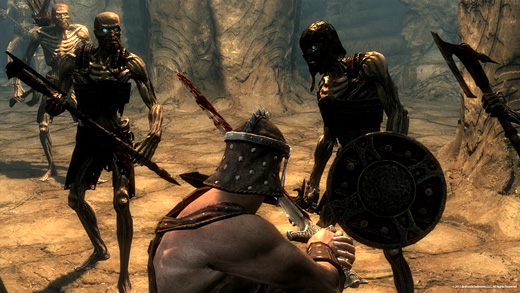 Our first meeting of the day was with Bethesda, and we were quickly escorted into a theater, where we were shown a live demonstration of The Elder Scrolls V: Skyrim. The demo was narrated and played by Todd Howard, the game's director, and was running on Xbox 360 hardware. It was apparent before long that Skyrim is not only a beautiful game, but also an even deeper game than its predecessor, Oblivion. Howard showed up just some of the features that Skyrim will offer, including dynamic weather based on location, dual wielding for weapons or for magic spells, the level system for acts like combat and blocking, and some true unpredictability. At one point in the demo, Howard used magic to anger an NPC and it reacted in a way that he'd never seen before, as the character pushed another out of a window before chasing Howard. At another point, a fight against a giant was altered by a swooping dragon that grabbed the giant and flung it away before doing battle with the character. Skyrim will offer over "150 dungeons" and quests that generate and change based on the player-character's actions. With just over 5 months before release, Skyrim looks to be the real deal and deserves some time in the spotlight during the Q4 avalanche of titles. 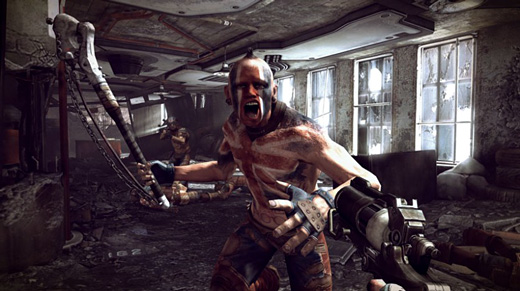 I got to spend some hands-on time with RAGE,  developed by id Software. The first observation that I made was how smooth the game demo was running; the frame rate held steady at 60 frames per second, and the level of visual detail was pretty impressive. There's certainly a Borderlands influence to be seen with RAGE, but that's not a bad thing at all. Some of the objectives weren't quite as obvious as they should have been, but there's time to work that out before the game's release in September. Expect lots of gunfire and a dash of item creation, plus some truly unique ways to dispatch your enemies on the wasteland. With no news yet of a Borderlands sequel, RAGE could fill that gap this fall; I look forward to spending more time with it. 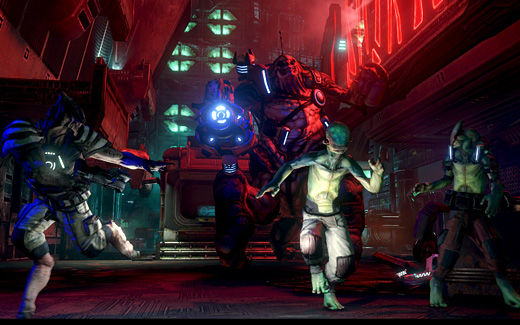 Our last stop on the Bethesda tour included another live demo, this time for Prey 2. This game focuses on Killian Samuels, a U.S. Marshal that was a passenger on the plane that collided with The Sphere in the first Prey. The demo took us through the aftermath of the crash, which showcased some first-person shooter combat up until Samuels' capture. From there, the demo moved ahead to Exodus, an alien world where Samuels has become a bounty hunter. This new vocation comes with some neat gadgets and tricks, including a scanner, rockets, a deployable shield, and more. In addition, Samuels has the ability to leap from ledge to ledge and hang on just underneath some for cover while firing on enemies. This game has an interesting art style, coined as "alien noir"; it was obvious that the development was still early as there was texture pop-in and the visuals just didn't wow me. There's still plenty of time to have my mind changed, though, as Prey 2 isn't due for release until next year.

After the Bethesda tour and some downtime, my next stop was a solo meeting with Capcom. Unfortunately, I did not have much time scheduled with them and really wasn't able to take much from the tour. Street Fighter X Tekken looks very good; the visuals are obviously influenced by Street Fighter IV, and that's certainly fine. Animations looked smooth and I liked how the Tekken character designs looked. I also got a look at Asura's Wrath, which holds a lot of promise. The idea of separating the game into different "episodes" was an interesting concept, and some of the characters and gameplay were delightfully off-the-wall. I wish I could spread similar praise to Resident Evil: Raccoon City, but I just can't. It just looks like another third-person shooter, and the implementation of squad mechanics in a Resident Evil game just don't seem to mesh. I did get some hands-on time with Dragon's Dogma, which I generally enjoyed. It's heavy on the action side and light on the role-playing game side, which was fine. The animation wasn't exactly smooth, and I had some difficulty finding certain waypoints, but the controls were intuitive and I really liked the fantasy setting. I'm hoping to see more on Dragon's Dogma in the months to come.

Our last meeting took us all to Warner Bros. Interactive, where we got to see Batman: Arkham City in action. The addition of Catwoman as a playable character and ther change of venue from an enclosed area (Arkham Asylum) to a city with much wider scope are just two of the additions that were apparent. A new "Momentum Glide System" allows Batman to fly with ease around Arkham City, and he can still use ziplines to quickly scale buildings and execute some truly violent takedowns of unsuspecting enemies. The melee combat, overall, packs a rougher punch with broken limb finishers, chokes, and more. One sequence, shown in a face-off with Penguin, pitted Batman against 25 thugs. Smooth transitions between blocking and executing strikes on enemies looked fluid and it seemed easy to get into a "zone" of sorts once you get the block timing down. The Catwoman sequences have their own stories—including an uneasy alliance with Poison Ivy—and the stealth mission shown in the demo forced Catwoman to crawl along the ceiling to avoid detection while grabbing multiple card keys from guards. Overall, the demo was impressive despite not tipping too much off as to the content that players will be getting when Arkham City launches later this year. 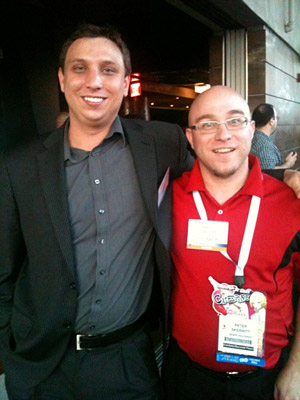 After E3 hours ended for the day, I made my way to the EEDAR/Wedbush E3 Networking Event. As many of you know, writing video game sales analysis pieces here is one of my areas of focus… and I have talked about Michael Pachter and Jesse Divnich here before. While I may not always agree with their analyses and predictions, it's the work of these two men that inspired me to write analysis pieces to begin with. Mr. Divnich invited me to the EEDAR/Wedbush event, and it wasn't long before I met both Mr. Divnich and Mr. Pachter. It was awe-inspiring and a real honor to meet the two men that have been the inspiration for a lot of my analysis work. To find out that both have read my work was an even bigger thrill… and goes to show that, even as an armchair analyst, you really never know who is reading. I'd like to thank both men for their time and for the experience; it was one that I'll never forget.

All of this activity, and it was only the first of nearly three full days of meetings and experiences! Wednesday's schedule is booked solid, iincluding meetings with:

I'll also be attending SEGA's Sonic Boom event at Club Nokia later that evening, which is slated to include some hands-on time with Sonic Generations.

As it's now past 1:30am, it's time to get a few hours of sleep. I am grateful to the KmartGamer team and to Sears Holdings for providing this once-in-a-lifetime opportunity for me and my two colleagues in Amy Tucker and Stephen Haberman. Amy and Stephen bring excellent insight and enthusiasm to this experience, and I'm honored to be working alongside them.

Disclosure: As part of my participation at E3 2011 on behalf of KmartGamer, Sears Holdings provided my travel and accomodations.