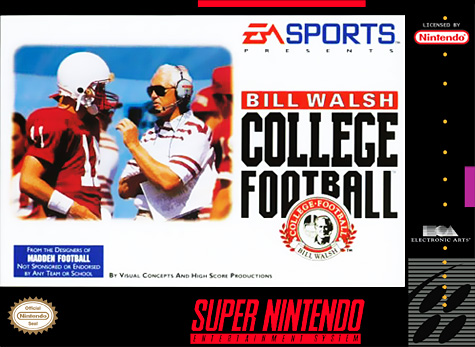 Pretty interesting—and sad—news coming out of Electronic Arts as the company has thrown in the towel on its college football video games after a twenty-year run that began back in 1993 as Bill Walsh College Football.

I understand that EA is diplomatically leaving the door open for future college football games, but I'm reasonably certain that this is wishful thinking and that EA will focus on the pros instead. Realism in college athletics can be very difficult to translate to video game form because, while developers can use the names of the colleges and stadiums without a problem, representing the players accurately is a different story. You can't use their names, but everything else—likenesses, stats, and so on—are copied. Sure, we're not playing as Johnny Manziel by name, but we sure as heck know that it's his virtual doppelganger on the screen we're watching as he tosses another touchdown pass. This opens up the argument about whether the players that are represented in these games deserve compensation based on the millions of dollars in revenue that the game rakes in annually.

After deciding to settle a case brought against it by former players on September 26th, Electronic Arts made the announcement that it was not going to make a college football game for next year. This was, honestly, the likeliest scenario even before the settlement. Once the NCAA agreement was off and EA had to start negotiating with the CLC and with individual conferences, the writing was on the wall. Sports games in this day and age require full licensing. Having some conferences and schools represented while others refused would have adversely affected the game's sales outlook. Imagine not having an agreement with the SEC, for example. No Alabama? No LSU? No Florida? No sale. The game would no longer seem legitimate to sports fans. Combine that with what will probably be a hefty settlement and the financial hit it requires, and it simply makes little fiscal sense for EA to pursue a college football game for 2015.

Personally, I see college football going away from video games just as college basketball did back in 2009 after EA buried its NCAA Basketball series. It'll be a bitter pill for college sports fans to swallow, and NCAA Football 14 will likely rise in resale price next season… much like College Hoops 2K8 and NCAA Basketball 10 prices spike during March Madness every year. The end of EA's college football games is a bit more jarring because the games have been coming every year for two decades. What will fans do once EA disables its NCAA Football servers? What about fans who are looking to upgrade to Xbox One and/or PlayStation 4? Those fans will be left out in the cold, longing for something that simply won't be coming back.

It's also worth mentioning that this marks the loss of a second game on EA's release calendar for 2014. The company announced earlier this year that its Tiger Woods PGA Tour Golf series was taking 2014 off to transition properly to new consoles. The good news is that UFC helps to cushion the blow of losing college football a little bit, but it now has to make up the difference in revenue for two significant sports games that won't exist or no longer exist.

Personally, I was never into college football as much as I've been into the pro game. I've bought Madden every year and always considered NCAA Football to be like an appetizer. It's sure going to be weird not seeing it on store shelves next July as schools prepare to open their seasons and the first media rankings hit the papers. For many people, NCAA Football was as much of a yearly tradition as Madden is… and it's admittedly sobering and somewhat sad to see that tradition come to a rather abrupt end.