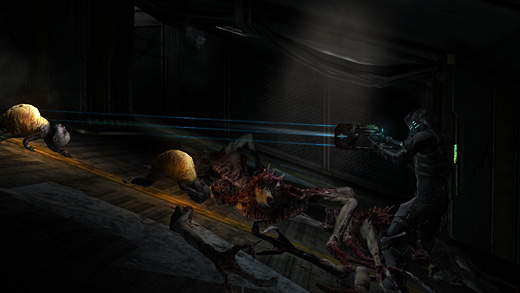 I know that it's been some time since I've written. Working in video game retail, you can probably guess that the last few weeks have been pretty crazy… and this trend will continue through the rest of 2010. I'm still pretty active on Twitter, as it's much easier to react or speak in 140 characters than it is to organize my thoughts into coherent blog entries. Once the hustle and bustle of the fourth quarter ends, I'll be able to write a bit more and keep updating here more frequently.

Having said that, there are a couple of things that I feel the need to react to:

The first thing is a Gamasutra piece that contains some quotes from EA Games' Frank Gibeau. Gibeau is quoted in the piece as saying that single-player games are "finished". It's funny to me how the desire to play a game alone is now perceived by the industry to be some sort of cancer that needs curing. It's obvious that the single-player model doesn't appeal to the industry any longer because it's far easier to produce DLC for multiplayer functionality. Yeah… we'll see how well this new direction bodes for EA when Dead Space 2—a sequel to a 2008 game that was an excellent single-player experience—force-feeds its fans a multiplayer mode that really didn't blow me away when playing the beta a couple of months ago. It's BioShock 2 all over again as players are given something that the industry seems to think that they want.

Don't feed me the lines about focus groups or e-mail suggestions stating the contrary, because I just don't buy it. The console gaming industry, by way of its trends and poor decisions over the course of this console generation, has cost itself the benefit of the doubt. The fact is that redirecting resources to a multiplayer mode takes resources away from the single-player campaign. I will be very curious to see if Dead Space 2 is another BioShock 2 situation next month. Don't be surprised if it is.

Lastly, can we please stop giving Michael Pachter vehicles within the gaming press to spread his blatant trolling? In the course of the past few days, Pachter has said that handheld gaming is fading, the PlayStation Portable 2 (PSP2) (which hasn't even been officially unveiled yet) will flop, and that multiplayer games need to start charging players some sort of subscription fee. Yeah, I'm pretty much convinced now that Pachter has put aside any sort of professionalism or credibility and instead is just talking to hear himself talk and try to draw attention to himself. I don't care if this man has a Master's in Business or not; he's seceded from doing his job—which is analysis—and now seems to thrive on uttering baseless "predictions" which only exist to drum up controversy. It's bad enough that GameTrailers gives this man face time via a regular show. The rest of the gaming press should be intelligent enough to know that Pachter's utterings aren't "news" at all. I understand that there's this constant need to generate news stories and generate hits for gaming websites out there, but the amount of coverage that this man (undeservedly) gets is not only mind-boggling… but also genuinely disappointing and shameful.

I can't wait to get back to writing more regularly, but I just had to cover these two topics—even at 6am before hitting the sack. My passion still burns, even if the time to appropriately convey that passion isn't as plentiful as it's been earlier in 2010. I have a lot to say, and I hope that you're not only willing to read it… but react to it, as well.

It bothers me a little that Pachter is being ginned up by big media as some videogame pundit, when all he is is an investment analyst from Wedbush-Morgan, which is a brokerage firm. Why him and why right now? As if there are millionaires lining up to sink their money into a notoriously unpredictable market?

Pachter is a douchebagel. Wedbush Morgan is a brokerage firm. Since they’re turning Pachter into a videogame media pundit, I guess we’re to assume that Wedbush-Morgan is now pushing their clients into videogame stocks as a sensible investment? Gah. That kind of spin cycle deal is not going to help the business.

[quote=Sakilla]I read an interview with Pachter in Game Informer, where he basically stated his job is to make predictions for share holders and investors, not for gamers and the gaming press. He even stated that he is often wrong in his predictions, but that share holders are far less concerned or impacted by this than gamers are. I felt that this is relevant to your observations. I had read your article first, but honestly, the Game Informer article told me much about Pachter that you had left out, that in my opinion, presents a much different perpective on the man,… Read more »

[quote=Sakilla]I read an interview with Pachter in Game Informer, where he basically stated his job is to make predictions for share holders and investors, not for gamers and the gaming press.[/quote] IIRC he said that he is only analysing 7 companies in detail and only gives for them investment suggestions. (i think also mentioned it his cv-speech on the pach attack special on PAX) So everything else is really just his opinion as someone with a business degree and view and some interest in gaming. I doubt he would be working for Wedbush anymore when he would be only in… Read more »

I read an interview with Pachter in Game Informer, where he basically stated his job is to make predictions for share holders and investors, not for gamers and the gaming press. He even stated that he is often wrong in his predictions, but that share holders are far less concerned or impacted by this than gamers are. I felt that this is relevant to your observations. I had read your article first, but honestly, the Game Informer article told me much about Pachter that you had left out, that in my opinion, presents a much different perpective on the man,… Read more »

Pachter dose troll, he is also right 3 out 10 times so meh. First off single player is not dead, even when we have 20-30$ wireless broadband we will have single player, because multiplayer can not replace everything. Also I am still one of the people who will happy rebuy the game if we get a finished more polished version after a year or so, DLC or no DLC, I want a finished more polished product… and I am just not seeing it, for either MP or SP content. I am seeing more content for twice the price of the… Read more »

I like Pachter. I agree with him on Wii HD should be here already, i agree that handheld gaming is shifting to iphone mini-priced games (i personally have no idea why i should want to play “proper” games on a handheld when those would be definitely better on stationary consoles). 3DS with its 3d gimmick will proceed some time and psp2, if it’s really only going to be a more powerful two stick PSP1 with some touch-gyro-whatever, won’t sell. I can have that opinion and Pachter can too and everyone else also. And he is not exactly blablaing in his… Read more »

Gibeau is blowing smoke. No way in hell is single player “dead”. Is multiplayer more prominent now that it once was? Absolutely. But does that mean that single-player games will go away? No way. There’s just too big of a market for them.

I think your post (and the ones I’ve seen like it) are somewhat overreactions to an (admittedly) hyperbolic statement. Single player is OBVIOUSLY not “finished.” Elder Scrolls V will almost certainly be single player. Mass Effect 3 will probably be single player (with the likely multiplayer bits coming in a spin-off). Final Fantasy Versus XIII will be single player. So the days of epic single player gaming are not over. Instead, I think developers are becoming rather good at creating better multiplayer experiences than in previous generations. When Splinter Cell went multiplayer it created both an amazing adversarial mode and… Read more »