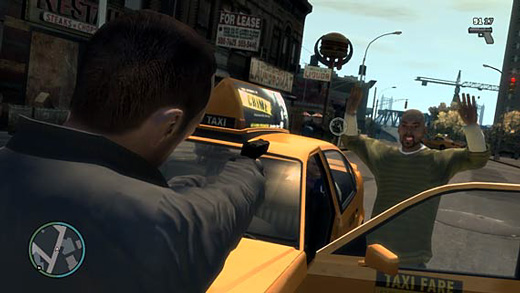 When you work in gaming retail, one of the biggest challenges you face revolves around the ESRB ratings system. It's not necessarily an unwelcome challenge, since I believe that the ratings serve as the buffer between open purchasing habits and government regulation… but the thing that gets me on both sides of the sales counter is the lack of interest displayed by some parents when it comes to enforcement.

There's a range of reactions that stem from this enforcement:

These are just some quotes that I've heard, and they're usually accompanied by eye-rolling or sighing and other frustrated body language. What's worse is the delayed angry reaction of some when they actually see what games like Grand Theft Auto IV or Modern Warfare 2 show for content. Parents ask how we can sell such awful games and sometimes ask for refunds or exchanges. Retail employees can only go so far. Aside from personal experiences with certain games, all they have is the ESRB rating and the content descriptors to go on, as well as potential word of mouth from other customers or fellow employees who have played the games in question. Some retail chains enforce the ESRB vigorously, while others don't enforce it at all.

Now, we have the Parents Television Council coming forward and asking retailers to move M-rated games to higher shelving and out of the vision of small children.

May I ask what this action is supposed to accomplish when parents already have shown signs that they don't care and when there's a decent level of ratings enforcement and ID checks already in place? Is it a retailer's responsibility to shield children from games that may or may not be right for them? Retail employees inform consumers about their goods, assist them in making positive buying decisions, and complete the sale. Video game retail, especially, isn't just about the children anymore like it was 20 years ago. More and more adults purchase and play these games, and that's the primary demographic is many cases.

Regardless of where the M-rated games are located in a retail store, curious children are going to be… well… curious. They're going to want to know what games are up there and why. It's going to further enhance the "forbidden fruit" theory about M-rated games and how "cool" it would be to play something that's not necessarily meant for their eyes and ears. Also, if these games are located on higher shelving, how high should this shelving be? By the game kids reach their early teen years, growth spurts may already have occurred, so hiding these games is rather pointless… especially when you consider that some adults never grow very tall (I'm 5'7", for example) and you wind up creating a potential inconvenience for the target audience while trying to play the role of Protector.

I get that advocacy groups are concerned about M-rated games getting into the wrong hands… but retailers can only do so much. At some point, parents need to play a more consistent and active role in the video game purchasing habits of their children. Parents need to learn that it is OK to say no to their children, even if it means a negative response from the child. Parental advocacy groups need to start looking in the mirror and then realize that they're part of the problem. We always hear about the retailers who don't do ID checks or how games get into the hands of children without much effort… but we never hear about how disinterested and nonchalant parents sometimes can be during the process. As with many other things in modern-day American society, it's convenient to point the finger at retailers or the gaming industry instead of looking at where the problem really lies:

Protectionism starts at home and with the family unit. Nobody else is responsible for the buying decisions that you—or your children—make.