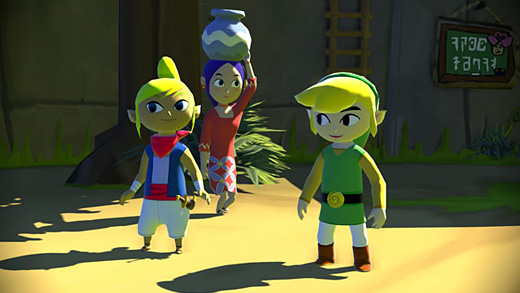 News of Nintendo electing not to hold a press conference at the Electronic Entertainment Expo (E3) this year is getting all kinds of reactions across the Internet. The two main camps that people are setting up in are these:

When Nintendo started rolling out its Direct events during E3 last year, I wondered then if this would be Nintendo's new direction. Then we got a Nintendo Direct event after E3 which announced many of the games that we would have seen at E3 in past years. It seemed to me that E3 was no longer as much of a priority for Nintendo as it once was, and I firmly believe that this latest move reinforces that line of thinking. It's important to note that Nintendo will still have some sort of presence at E3 this year, despite the lack of a press conference. Closed-door press gatherings and events for retailers will be held, and Nintendo will most likely have a booth/area for attendees to see what the House of Mario has up its sleeve for the next year. It's less complicated and likely less expensive to use this new, bold approach than it is to rent out the Nokia Theater and invest in light shows and set pieces.

My concern with the decision is that Nintendo Direct events don't have a wide reach outside of the Nintendo ecosystem. Nintendo fans watch them religiously, and gaming press does a great job of summarizing and reporting on these events during and after they happen… but what about those who haven't yet bought into what Nintendo is selling? Mainstream media like USA Today or network news aren't going to follow Nintendo Direct events. Worse, the lack of a press conference similar to what the competition will be delivering does arguably show a sign of surrender, as if to say, "Yeah, we were gonna get blown away by Sony and Microsoft anyway, so we decided to cut our losses." When Spike TV, Game Trailers, and many other gaming press sites streamed Nintendo's press conferences, people of all kinds would watch… not just the Nintendo faithful, and not necessarily just core gaming consumers. Now there's nothing to stream. Nintendo broadcasts its Nintendo Direct events on its own terms, via its own streaming networks, and if you don't actively seek them out, you'll miss out. Then Sony and Microsoft really will have all of the draw, and Nintendo will be left to its loyal fanbase to buy their games while others go elsewhere.

If I was Satoru Iwata (which I'm certainly not), I would have used the press conference to assert the fact that despite its perceived troubles, Nintendo is in great shape. Split the event in two, starting with Wii U and showing off the games that the company has slated for the rest of 2013, including the very important Q4 period. Take the time to explain to the audience exactly what Wii U is, and what it can do. Eliminate the confusion. Show confidence in it. Then deliver the 3DS side, showing off the games that are finally on their way which will propel the handheld back to positive YOY comps. Show Pokemon. Show Zelda. Drop a surprise. Make the audience believe. The press conference, in my estimation, didn't have to be about rolling out anything new at all—it could have been a re-roll opportunity for Wii U and a great chance to show the masses that 3DS is in great shape moving forward and that 2012 was an aberration.

But that's me. The only things that Mr. Iwata and I have in common are wearing glasses and playing Rollerball for the NES (a game that he was a producer on). I don't run a major video game company worth billions of dollars. It's far too easy for me to sit here in front of my laptop at 2am and talk about what I would do since there are no ramifications for me. My idea is just that: an idea, and not necessarily the right thing to do.

The thing that we must do right now is to wait and see how the decision affects the overall outcome. If sales improve significantly, those who criticized the decision will have to eat some crow and Nintendo potentially sets a precedent for other companies to follow. If results don't improve that much, we can again talk about Iwata's fate and how his poor decision-making have put Nintendo in a delicate state. We won't know—we can't know—for quite some time.

I do have my reservations about Nintendo's big gamble, but the die has been cast and I'll be very curious to see whether the company doubles down or busts. No outcome is guaranteed, and it'll be fascinating to watch things unfold during E3 and beyond.

[quote=Chi Kong Lui] [quote=Alv]Whatever they do, Nintendo need to get it right with the WiiU before the next Xbox launches, or it may find itself without a market, getting squeezed by the Apple / Google behemoths on the one side and the Microsoft / Sony juggernauts on the other. An wholly unenviable position…[/quote] How is that any different than present day?[/quote] Different to the present day because Nintendo hardware has the technological advantage over current offerings from MS and Sony. Different to the present day because MS and Sony are near the end of the hardware cycle and have realised… Read more »

[quote=Alv]All told, unless Nintendo can recreate their market-making trick with some titles that emphasise the WiiU form-factor, or properly surprise the market with some genuinely new IP, I fear that relaunching / advertising may be enough – they’d have to work extremely hard to convince consumers that the form-factor is both i) distinct from tablet gaming, and ii) that there is a pipeline of gameplay that is only possible on that form-factor.[/quote] Having played Nintendo Land with two seven-year olds, I can say that any attempt by Nintendo to capitalize on the newness of the “gimmick” has long sailed off.… Read more »

[quote=Dale Weir] So again I am not against Nintendo going low-key next year or whatever, but this year when you have to essentially relaunch a system after losing all of that momentum, you need as many eyeballs as possible and a press conference at E3 is still the way to go.[/quote] I’m not sure that I agree that WiiU needs relaunching. We all know it exists, but we sure as hell aren’t convinced that it has the titles necessary to justify that existence – yet! On the basis of it’s technical superiority over Xbox and PS3 being somewhat marginal, especially… Read more »

E3 SchmeeThree. Interesting to hacks, and perhaps allows wall street analysts better assess potential revenue pipelines and estimate target share price. Also may provide a few cheap, but ultimately meaningless thrills relating to the potential next big thing. But by and large, completely irrelevant to the game buying and playing public i.e your readership. Every year, I read the same old excited crap about E3 on gaming sites, but frankly, I really couldn’t care less about it. When a game gets published, it gets reviewed, and if the reviews are good enough, people rave about it, and Amazon get my… Read more »

I’m not going to argue for E3 too much because I believe it isn’t as necessary as it used to be especially now that so many other conventions and industry conferences have popped up as venues for similar news and announcements. But I would like to point out that it still gets the mainstream medias attention. Time Warner Cable subscribers in the NY/NJ area get an exclusive channel called NY1. (I think it is for all Time Warner Cable subscribers.) It is essentially does local news. It is available to all subscribers but I don’t know what its ratings are.… Read more »