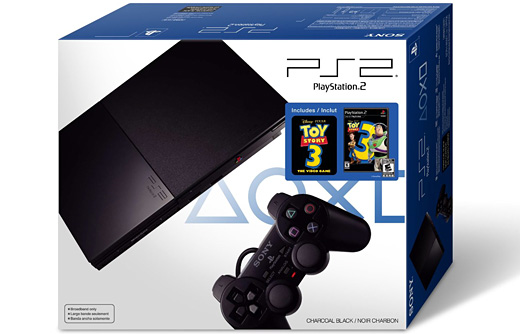 After over four years of service, I had to retire my silver slim PlayStation 2 unit this week. It wasn't broken, really, but a few discs were having trouble being read by the console and DVD movies no longer played on it. I'm now the owner of a brand new black PlayStation 2, in its final hardware iteration. I'm not a fan of how inaccessible that the Power and Eject buttons are, but it runs everything really well and getting a new controller is a nice bonus. The new console also came with a copy of Toy Story 3, which I was happy to add to my collection. I don't know how much I'll play it, but free is free.

I've spent a good chunk of the last couple of days hunting down more games for the PlayStation 2, and have added somewhere close to 20 games to my collection. I parted with some more current-gen software to afford it, since I'm now officially unemployed, but paid no money out of pocket for either the new PlayStation 2 or for any of the games. I took advantage of some decent trade-in deals to make this happen, so that's always good news. Here's the full list of additions:

I'll have to do an inventory of my games, but I'm pretty sure that I've eclipsed the 150 game mark after these latest additions. The .hack games, Indigo Prophecy, and Metal Gear Solid 3: Subsistence are the notable games here. I really want to complete the .hack series (both of them) at some point. I really liked the episodic idea and they're as close to actual MMOs as I'll ever want to get. When I do my Top 10 Most Wanted List later this week, those will be up there for sure. 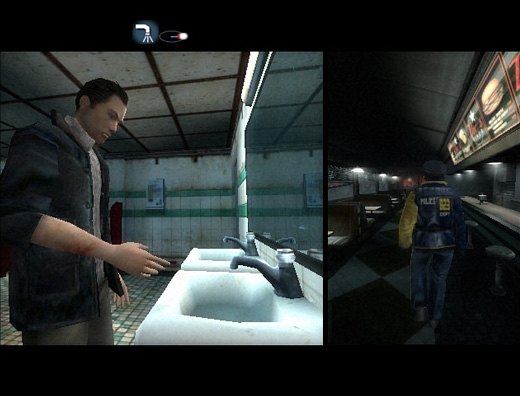 Indigo Prophecy was a nice find. I didn't know that it was from Quantic Dream, the same development team behind Heavy Rain. I can see the similarities, although the play controls in Indigo Prophecy are a bit frustrating to me. I love the story so far, the interesting relationships illustrated between characters, and some of the cinematics that the game implemented. I do wonder how I would have viewed Heavy Rain had I played Indigo Prophecy first; Heavy Rain feels like an advancement of the ideas that Indigo Prophecy introduced. It's kind of neat to see that advancement.

It's nice to have the three main Ratchet & Clank games. I've played a bit of each in the past, but have never beaten any of them. Their PlayStation 3 counterparts are great, but it's fulfilling to go back to the start and see how Insomniac built the IP from the ground up. I love the humor and the characters, and have always preferred this series over Jak & Daxter. Not that the Jak IP is bad by any stretch.

Lastly, you'll notice the large amount of sports games. When building a collection, these games are the least expensive additions… and I'm personally a fan of the genre. I was happy to have found a good number of Midway sports games, which are among my favorites. Although the NFL Blitz games on the PlayStation 2 were no longer based on coin-ops, they still played just as tightly as their arcade cousins and there was more depth with playbooks and gameplay modes. NBA Ballers started out as an interesting IP, as it seemed to borrow from both NBA Showtime and EA Sports' NBA Street, and the original was never surpassed in terms of playability or quality. As for NHL Hitz, I adored these games. They felt like natural progressions from Midway's Open Ice and Wayne Gretzky's 3D Hockey IPs. The action was fast, there were lots of goals, and the games felt like they could have been played in an arcade. The one weak link in the Midway sports catalog was the MLB Slugfest series. Poor fielding and a sense of tedium in long games tended to hurt the enjoyment of these titles. Still… intentionally beaning a batter and getting into a fight on the mound is strangely satisfying.

I'd like to start cataloging my collection, although I'd love some suggestions on ways to do so. Should I try to learn Excel? Are there websites that I should use? If you have ideas, please share them in the comments below. Once I decide on the best way, I'll start so that I can share my full collection with you.

In the meantime, look for my Most Wanted list within the next couple of days. Limiting that list to just ten will be a challenge.

Thanks for mentioning Darkadia, Pedro. That’s exactly the type of thing I’ve been looking for. I wish there were something similar for movies, music, books, etc.

Hey Peter, I enjoyed this, and also the article on the GxTV. What details of your games do you actually want to catalog which would involve Excel? There’s a free online service which I read about before called Darkadia. It displays your games in a virtual cabinet, and as well as storing game details, displaying the original game covers, and allowing you to catalogue by genre and Finished/Unfinished etc, it allows you to enter your own notes on each game. I just gave it a quick whirl and it might suit your needs – most of the above games were… Read more »