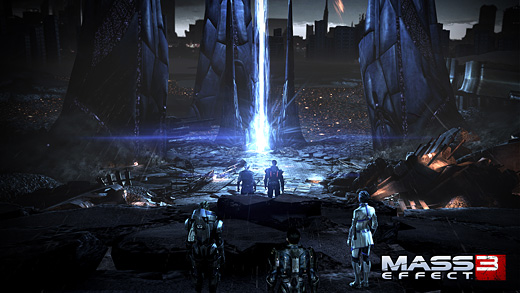 It seems that the controversy surrounding Mass Effect 3 has been cranked to 11. An FTC complaint against BioWare is the latest individual action, and it's served to fan the flames of what's become a binary topic. People seem to either enjoy and/or accept the game's ending for what it is (Let's call these people Group A) or they are upset for a variety of reasons (or Group B). I have no horse in this race myself, as trying to play either of the first two Mass Effect games was met with rapid failure and disinterest that shortly followed, so it's interesting to observe this controversy from a distance.

Both groups are angry, and verbal attacks back and forth can be seen almost anywhere, but there's a whole lot of shouting and not a whole lot of listening. Group A is angry at Group B because of the various methods that they've employed to get their message heard. Group B is angry at Group A after being told by many in that group to basically "shut up and accept it". I can understand the anger on both sides, but it's all counterproductive. What's worse is that the anger level is increasing—fanned by the gaming press—and voices of reason are few and far between.

I fail to see how responding to angry reaction with more angry reaction gets anyone closer to a resolution of this issue, and it bothers me greatly to see members of the gaming press that I respect piling on. Perhaps it's an unfair expectation, but I expect gaming press to at least be able to acknowledge both sides of an issue. Seeing the "shut up" and "whiny entitled gamers" reactions continue to populate articles and Twitter feeds saddens me. I expect such behavior from the average message board poster who is upset over an issue, but not from people who are supposed to be looked upon as experts, professionals, or thought leaders.

That's what bothers me the most here. The theme has been constant over the past week, and this FTC complaint has only served to anger gaming press even more. Why? What's in it for them? Where does this hatred come from? One man's complaint—or one (allegedly small) group of vocal individuals—doesn't grant anyone the right to preside over an entire community, painting gross generalizations and haranguing anyone who reads his or her words. This approach just makes some people—especially in the opposing group—angry. It disappoints me, and I'm not even in either group. I'm saddened by the insults, the preaching, and the "holier than thou" stance that I've seen so much of. I won't even touch on the overuse of the "entitlement" term.

I don't think that outcry over Mass Effect 3's ending will change anything, and it probably shouldn't. BioWare has painted itself into a tight little corner, where there are consequences for every subsequent action. To me, the best course of action is for BioWare to take its medicine, acknowledge (or continue to acknowledge) public concern about the situation, and try to learn from the controversy. It's also a good sign that so many people are passionate and involved in this debate, even if some are taking it too far on both sides. It's evident how powerful the Mass Effect IP has been, and how many people consider it to be special. I believe that I saw a Twitter post recently putting Mass Effect in the same company as Seinfeld and The Sopranos, in terms of dubious endings. Both of those television series were critically acclaimed and continue to sport strong bases of fans long after their runs ended. It's telling to me that Mass Effect has drawn an even sharper division and reaction from its fans as to how the series ended.

It's a shame that the issue has devolved into the shouting match that it has. Perhaps a lesson can be learned once the smoke clears, and cooler heads can prevail. We can all agree and disagree—or agree to disagree—but I believe that we owe it to each other to at least hear out the opposing side of an argument and at least acknowledge that other side. Many of you will disagree with what I've been saying over the past week or so, and that's perfectly fine. If you've made it through reading this far and can at least acknowledge why I feel the way I do, that's all I can hope for.

The question of whether it’s worth it to buy the next game on day 1 is interesting though. Let’s say Bioware resolves the ending in a way that doesn’t manage to make things worse and eventually attempts to release a quality Mass Effect title while making an honest attempt at improving the writing quality, gameplay and not shilling for cash every minute. If they do that wouldn’t it be preferable to play the game day 1 and be part of it all? I think for me, as long as I’m entertained for 40 hours or more I’m perfectly happy spending… Read more »

I guess I am firmly in the camp of loved the game, hated the ending. However, most people that I have seen in this camp, including the Retake movement is trying to keep a clear head. Most of the word passed around from that camp is to avoid insults and keep above the pettiness. However I understand it’s difficult when a lot of people troll their posts with comments that are nothing more than elaborate “lol butthurt fanboys” comments. I think a lot of fans were not disappointed by the lack of a happy ending so much as it was… Read more »

I’m also in the ‘enjoyed the game and am confused about all the anger’ camp. While I understand why someone could be disappointed with the way ME3 ends the trilogy, I’m puzzled by the sheer ferocity of attacks against Bioware. Of course there are plenty of reasonably sounding folks who disliked the ending and make their opinion heard in a calm manner. Unfortunately these folks are a bit overshadowed by what looks like a raging horde of lunatics. In turn people throw around words like ‘entitlement’ and put everyone who didn’t think the end of ME3 was all candy and… Read more »

I suppose I’m in the crowd that liked the game overall and is slightly confused about how angry people are. While I think the game was a good value and for the most part well-made I can definitely sympathize with people who are disappointed with it. Since Mass Effect 2 the series has made a heavy push to get the player to pre-order the game, buy limited editions and purchase a neverending stream of downloadable content. New missions. New characters. New choices. New weapons and character skins. The justification is that it’s okay to ask for more of your customer’s… Read more »

I have to agree, the way the gaming press at large has handled this debate hasn’t exactly been graceful. However, I don’t see how any “resolution” can be possible – this is a clash of diametrically opposing opinions, after all, and you can never make it right for both sides. As I see it, the debate will only die down once everyone’s gotten tired of it. For the record, I’m one who thought the ending was terrible, but while I can sympathise with those who petition bioware to change it, I don’t see any personal merit in that. The damage… Read more »

Seeing the “shut up” and “whiny entitled gamers” reactions continue to populate articles and Twitter feeds saddens me. I expect such behavior from the average message board poster who is upset over an issue, but not from people who are supposed to be looked upon as experts, professionals, or thought leaders. And therein lies the problem; most of the gaming press consist of complete imbeciles. That may sound harsh, but the juvenile and superiority/elitist response of the majority of the gaming press has been, quite frankly, disgusting. Furthermore, it only evidences the obvious notion that most of the gaming media… Read more »