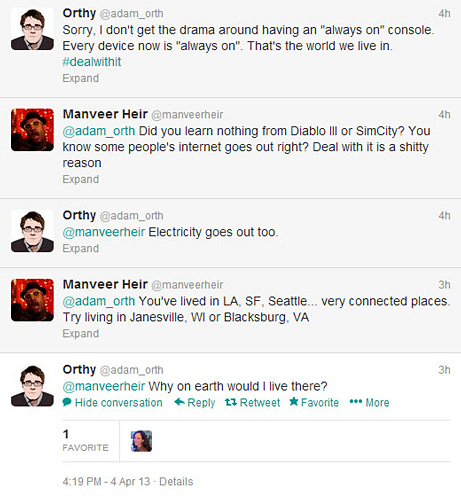 What a day Adam Orth had. What was thought to be a relatively benign conversation on Twitter has blown up to a worldwide fiasco leaving Orth's employer, Microsoft, with a damaged public image and leaving Orth under siege by press and message board posters. More than 50 websites have linked Orth's comments about "always being online" to the persistent rumor that Microsoft's next platform will indeed require a constant internet connection to work.

I'm not going to get into the right and wrong about constant connectivity. I have no horse in the emerging console race; the console video game industry has already successfully scared me off. I think that there are pitfalls with such a strategy, and if consumers can't play their games, it could be very bad… but I can also see the benefits, mostly in the arena of courting online players who tend to spend more on downloadable content (DLC) and online subscriptions. I think there are fair points on both sides of the debate, but that's not for me to moderate.

What I want to touch on here is the power of social media and the illusion that what you say in fact does represent others.

We've seen several instances where social media situations have led to firings. People say things on Facebook and/or Twitter that don't necessarily represent the opinions of their employers, and yet it very much does. Once you attach the name of your employer to any public profile, using "these opinions are mine and not my employer's" does not apply. People try to hide behind this all the time, thinking that it's some kind of immunity… but we see time and time again that it simply is not. When you post anything potentially controversial, such as a picture or sharing a personal opinion, it's tied to you and to everything tied to you that you've publicly disclosed. Your school. Your employer. Your family. If said opinion or picture is deemed offensive or controversial, people are going to react. Employers usually bear the brunt of Web reactions and get raked over the coals, suffering damage to their public image and dealing with the pressure from those seeking to punish the company because of one person's opinion or picture.

In Orth's case, the assumption was made by many that his opinion was reflective of Microsoft's strategy moving forward with its new platform. This led to an explosion of reaction across the Web. Generally negative news stories appeared on websites. Message board posters and news story commenters pledged not to buy the next Xbox. Some even called for Orth's termination. In response, Orth locked his Twitter account, several members of the game development community attempted to defuse the situation and vouched for Orth's character. Microsoft made a statement distancing itself from Orth's position but did not deny the persistent rumor about constant connectivity.

Like it or not, it's time for us to learn to watch what we say in the social media space. We can cry about "freedom of speech" and not being able to express ourselves as we see fit, but the truth is that what we say in social media follows us everywhere. You might think that your posts don't represent your employer, but the scores of people who read what you say don't see it that way… and if it becomes a negative reflection on that employer, you very well could be looking for a new one.

Think before you post. It's not hard. If you get that nagging feeling that says, "Hey, this might piss some people off," then rethink it. Post it privately. Call someone and tell them. Write it in a journal.

I'm not saying that your fate will be anything like the ordeal that Adam Orth is facing, but do you really want to take that chance?

MS has one chance to get me. If they enable the next box to play Xbox games even with a dongle I am in.

Freedom of speech means you can say whatever you are going to say, just be prepared to face the consequences. A lot of people get this confused. Some people even act like freedom of speech protects them from other people disagreeing with them. Silly. As far as the neXt-Box goes, if the rumors are true I am not interested in getting one. I have a feeling that if it is released as everyone is expecting it is, it will going to fail and Microsoft is going to have to regroup. At that point the damage will already be done. It… Read more »