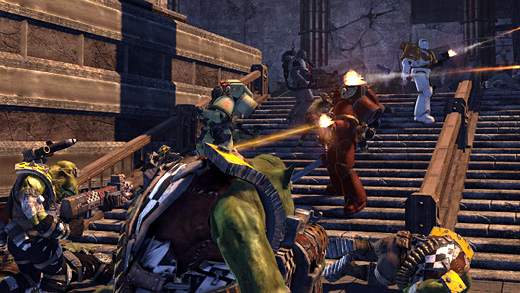 The console video gaming industry has successfully trained consumers to expect downloadable content for most new games over the course of this generation. We know it's coming. It's rarely a question of if… but when. I've talked a good deal over the life of this blog about downloadable content (DLC), its validity, and the effect that it's had on the medium.

Here's one thing about DLC that I will never understand, though: Why do publishers feel the need to start talking about DLC before games are released?

It's not about the game as it ships to retail anymore; we have to hear about all of the content that our $60 purchase doesn't cover. It sours the experience. Hearing about more maps, extended campaigns, and other DLC before release always begs the same question: Why isn't this stuff included? Excuses about development timelines and "going gold" only go so far when publishers trumpet announcements of DLC months before launch.

Is there any particular reason that publishers can't sit on DLC announcements until a couple of weeks after a game ships? Why even present the illusion that incomplete or content-stripped games are hitting stores? Hearing about DLC before a game comes out doesn't make me want to buy that game at launch; in fact, as a consumer, I'm more likely to wait before buying that game and see if a new SKU with DLC included hits stores for a better value. I don't care at launch whether you're going to support the game in a year's time. I care about getting the most for my money, and touting content that I'm not getting unless I pay an extra premium is not adding value. At all.

I don't think that the industry even realizes what it's doing. It's arguable that it doesn't care, but that's not the point. There shouldn't have to be a need for unpaid industry defenders to leap to the rescue and attempt to justify actions like these. It could have started with responsible decision-making. Why damage the perceived worth of your game at launch by talking about all of the things that won't be included in the package?

Why is this such a difficult concept to grasp? Is it possible that nobody sees why this could lead to a perception problem?

It's an unfortunate imbalance. Gone are the days when consumers can look forward to what they're going to get for their $60. Instead, we're now forced to ask about what we're not getting for our $60. It's a case of putting the cart before the horse, and this standard is one of the growing list of things that has made this console generation so disappointing.

There really isn’t much of a point here. If you choose to believe that announced DLC is something that was stripped away from the full game, then that is your fault. No one else’s. The developers of a game, after finishing said game, go on to work on other things. If that happens, then sure it could be DLC. And let’s be realistic. The only people who will know of these announcements are those like us who look at game websites and keep up on all the news. When buying a $60 game, we know generally what we are getting… Read more »

Here’s a novel idea: if developers are so worried about the employees sitting on their thumbs doing nothing, instead of getting them to work making stuff that should have been in the initial release of a game to resell as DLC…why not have them start working on another FULL GAME? Crazy, I know.

(i) Timelines are more than just an excuse. Nobody wants to pay their programmers to do nothing, so an organised studio will have their jobs planned for at least the next six months. This involves deciding who will work on DLC, and for how long. On top of that a sensible studio will set up a budget for each game they’re working on, showing how much it’s expected to cost, and how much they might get in return. This also requires planning DLC and estimating its pricing, sales, and time to create. (ii) Some gamers would prefer not to be… Read more »

Consoleation posts on this site always get to me, i always finish reading and think ‘yeah, thats a good point’. Game critics has really opened my eyes to all this shady bullshit thats being thrown at consumers by the industry.

over the last decade we’ve seen a good number of games that were packed full of content on release (im sure we can all think of titles that stand out) but now these will become the exception to the rule.

pay more for less. thanks