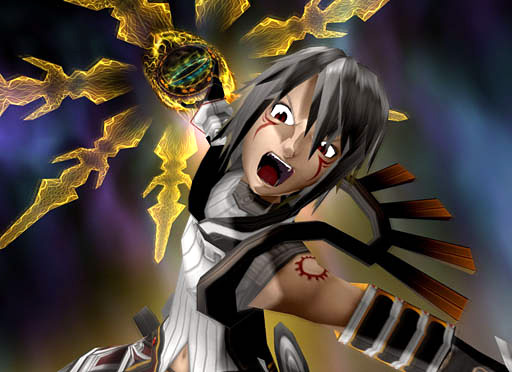 I managed to accomplish two separate goals this week, when it comes to my PlayStation 2 collection. I was able to locate the final game in the .hack//G.U. trilogy to complete the set and I surpassed 200 total games thanks to a couple of decent hauls.

Here are the new additions:

.hack//G.U. Volume 3: Redemption (Disc & game, no manual): Easily the most expensive game I got, I couldn't afford to pass up complete the G.U. set. I'm now torn as to whether I should wait to play until I find the third and fourth games of the original .hack series and play all seven games… or whether I should use the Terminal Disc (which has summaries of the original .hack games) to set the stage and just play. I'm aware that I'm probably a little more excited about these games than most people, but that's OK.

Trapt (Disc only): I had forgotten about this game until I saw it, but when I realized what Trapt was, I had to have it. Trapt is the last of Tecmo's Deception games, and it's the only title in the series on the PlayStation 2. You probably recall that I found a copy of Kagero: Deception II for the original PlayStation earlier this month, and I'm a fan of the series. If you've not played any of the Deception games, the idea is to kill each character in a level by activating traps of your own design and placement. You can be as devious as you want. Imagine using a bear trap to hold an enemy in place, followed by impaling him with an arrow shot from the wall and then finishing him with a rock that rumbles down the staircase. It's good to be bad… just ignore the story.

Summer Heat Beach Volleyball (Disc only): Volleyball games aren't a common occurrence, and that's a shame. Games like Super Spike V'Ball (NES) and Beach Spikers (GameCube) were a lot of fun to play, adding arcade simplicity to the controls to make them accessible to anyone. Summer Heat Beach Volleyball doesn't quite reach the same level of fun that the aforementioned games offer, but it offers a respectable volleyball experience. One drawback is that Kylie Minogue's "Love at First Sight" plays way too much. You'll tap your toes at first, but you'll find yourself reaching for the Mute button before long.

Robin Hood: Defender of the Crown (Disc only): I bit on this because of nostalgia. My first experience with Defender of the Crown was on my Commodore 64, and then I played the NES port. I wasn't very good at the strategy parts, but jousting, archery, and swordplay broke up the rougher parts. This game is nowhere near as fun. The archery is awful and the strategy segments are needlessly complex. I'll probably go back to this at some point, but my first impression was about as far from favorable as one can get. Yeesh.

Silent Scope 3 (Disc only): It's tough playing these games without the rifle, as we saw on the coin-op… but this conversion delivers the full arcade experience and adds a second full game to the package. I admit to dropping quite a few tokens on Silent Scope 3 in the arcade back in 2004, so getting to play without tokens is a guilty pleasure. Using the Dual Shock controller takes some getting used to, but the game is playable. Take him down in one shot!

Sega Bass Fishing Duel (Disc only): I remember seeing this game on store shelves a lot during 2002 and 2003, but I always passed on it for some reason. I'm not sure why. After all, I liked the coin-op and the Dreamcast conversion. For $3, I decided to take my shot on it—and it might not have been a good decision. Sega Bass Fishing Duel seems to want to bring more realism to the fishing experience instead of focusing on the title's arcade roots. This leads to more complex controls and having to hunt down the right fishing spots. I'm a fan of quicker gratification… which is probably why I don't go fishing in real life. I'll stick with the version on the Dreamcast Collection.

Shining Tears (Disc only): Do I really need another "hack"-tion RPG? Probably not, but I bit on Shining Tears nonetheless. Then I remembered that I played this back in 2005 and didn't like it too much. Whoops.

MVP Baseball 2003 (Disc only): This was the first game in EA's MVP Baseball franchise, and the only one that I didn't have. I actually liked this game.

NHL 2005 (Disc only): After NHL 2003, I didn't like the direction that EA took with the series. The NHL 2K games really took off in terms of presentation value and gameplay, while the NHL series suffered from an identity crisis. Arcade or sim? I don't think EA knew for sure. A quick game reminded me of this. We can laugh about it now, though; the NHL 2K series is dead and the NHL series has been improving every year.

Medal of Honor: Rising Sun (Disc only): This game, the follow-up to Medal of Honor: Frontline, could have been special. In fact, the first 10 minutes of the game would lead you to believe that it is. The attack on Pearl Harbor is tense as you scurry from below-decks to see the bombardment first-hand. Manning a boat turret and trying to fight off Japanese planes is exciting, even though you know that any victory is hollow given what we know about what happened that fateful day. When the first-person shooter action starts, though, the excitement fades. It's too easy to get lost or lose track of objectives and you spend a lot of time running around wondering where to go while trying to avoid being shot and killed. The series would never recover after Frontline, and this game is the first example.

NFL Blitz Pro (Disc only): This game is a significant departure from the earlier Blitz titles for the PS2. Late hits and blatant pass interference remain, but the running game takes precedence over crazy pass plays and the presentation feels rather awkward. Tim Kitzrow is nowhere to be heard in the booth, and the pace of the game is decidedly slower. I do like the new focus on the running game, but passing is a bit too haphazard to be a real option. This leads to a one-sided offense that becomes easier to predict and stop. Unlike NHL Hitz Pro, which stays closer to its arcade roots while adding a few more touches of realism, NFL Blitz Pro is a step backwards.

The Bard's Tale (Disc only): This game is a cousin to games such as Baldur's Gate: Dark Alliance, Champions of Norrath, and Fallout: Brotherhood of Steel. It's an action RPG with lots of hacking and slashing to be had, but the unique identifiers here lie in the ability to summon monster allies and the game's sense of humor. Cary Elwes provides the voice for the Bard, and delivers some funny—and snarky—lines to liven up the experience. There are musical numbers, as well, such as the famous Beer Song. The pacing in The Bard's Tale is a bit on the slow side, but not so much that it's not playable. I'll be spending more time with this game.

Dynasty Warriors 3 (Complete): I'm not sure why I enjoy these games so much. I'm not a history buff. The levels are far too long. The gameplay hasn't really evolved all that much. Still… the feeling of being near-invincible on the battlefield and taking on entire armies on your own is a major rush. Story and presentation aside, I enjoy the relative simplicity of the gameplay and these games aren't short experiences. This particular game is 10 years old this year. Let's call buying this a commemoration of an anniversary. Yeah, that works.

I'm not sure how many more games that I'll be adding before my move back to Massachusetts, but the promise of more independent game stores in the area means that collecting will resume before long. In addition, I'll be on the lookout for other platforms and software. I'd like to add a Nintendo Entertainment System sometime in 2012 and begin collecting cartridges for that. I'll have to see how my writing and back-to-school ventures go, of course, but that's the plan at this point.

I've updated my online game collection at IGN and the only platform that isn't complete is the PlayStation 3, as I have some downloaded games to account for. I invite you to check the site out and see what the collection looks like.

Hi ! It’s just one man’s opinion, but as someone who is into JRPGs without being a toal fanboy, I think 1. you will love G.U. but 2. you really shouldn’t play the first series. In a way, G.U. is more a re-imagining than a sequel, and the only thing you will gain from playing the first series (which is inferior on almost all aspects to G.U.) is a lot of redondancy and yes, a little knowledge of one or two of G.U.’s mysteries. The first episode of the first series is promising but the other 3 really fall apart… Read more »