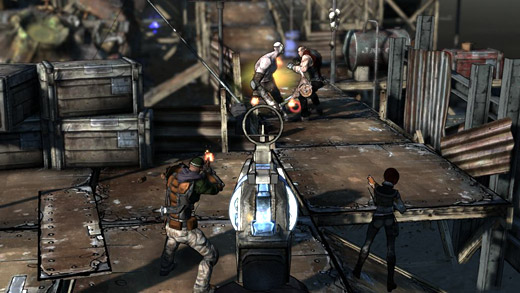 I don't get it, 2K Games and Gearbox Software.

I spent $60 on your Game of the Year (GOTY) Edition of Borderlands for the PlayStation 3. I was happy to double-dip on Borderlands, given how much I enjoyed it on the Xbox 360. In fact, according to my Raptr data, I spent 55 hours playing it. I was looking forward to playing it again on my PlayStation 3, with all of the downloadable content (DLC) this time. I was a little concerned when I opened the case and saw a DLC voucher inside; after all, a Blu-ray disc has a ton of room… so including the extra 4.41GB of DLC on the disc should not have been a problem. Still, I was fine with letting the download go while I slept overnight.

After going to the PlayStation Store and entering the voucher code, I was surprised to find that it didn't work. I grumbled, and tried again. Same result. After a brief Twitter exchange, I decided to let things go until morning, figuring that very few people bought the game at midnight and that things would be fine later.

By noontime the next day, the code still did not work… and I am justifiably angry. Even though the problem now looks like an issue on the PlayStation Store side of the house, since I see that others are having the same issue, I hold 2K and Gearbox responsible. What good reason is there to not have the DLC on the same disc? There isn't one. It's meant to dissuade trade-ins or buying used. Instead of having all of the content available on physical media, give a one time use code (that may or may not work) and let the consumer take the 4.41GB hit on his or her bandwidth cap. Buying the game used simply means that you are buying the same game that's been out there used for nearly a year but with different artwork.

I understand that, if this situation resolves itself, there's still a $10 savings buying the GOTY version of Borderlands for $60 versus buying the standalone game for $30 and the four DLC add-ons for $10 apiece. I don't get, however, why some GOTY versions of games (like Oblivion for example) have the DLC content included within physical media for immediate installation while others resort to Voucher Roulette. I bought this game new, and yet have to jump through hoops to access the content that I paid for. What's worse is that half of the paid content is digitally distributed, which will require at least an hour of time to download and install. All of the Borderlands GOTY content, between the PS3 mandatory installation and the DLC, consumes a whopping 7.11GB of hard drive space. I'm not sure that I see the value of the this package when all is said and done. I'm now soured on the experience, have to wait for a resolution, still have to devote the time to download and install the DLC, and saved a grand total of $10 versus buying a la carte. If I could return the game, I would… but because it's a problem with the DLC and not the game, I'm stuck with it.

Publishers and developers need to stop catching consumers in the crossfire when it comes to their War on Used Games and the battle with resellers. Had they not been fighting this war, I'm willing to bet that the content would have been on a disc instead of via a 12-character code that's still worthless 12 hours after buying the game and removing the seal. I did nothing wrong. I spent money on your game and bought it new… and yet I am treated to this experience?

Tell me why I shouldn't have just bought Borderlands used, and then bought the DLC that I wanted for it.

There isn't a good reason why, other than wanting to make even more money on assets that have been around for some time already—which you would have gotten from me when I bought the DLC. Instead, I played by the industry's rules and got burned in the process. I don't want to hear arguments about who is at fault. I don't want to hear how "stuff happens" and that the situation will be fixed. If I buy a game at the full $60 price tag that the industry seems to think it deserves for providing us with such fantastic entertainment, then I expect to have access to what I have paid for.

I shudder to think what Sony has done with its Uncharted 2 Game of the Year package. How much of that will be voucher-only? Will they work?

I'm pretty much done with GOTY packages after this mess, personally… and my distaste for this console generation and the industry's blatant lack of regard and respect for its consumers continues to grow. It's appalling.

Partly i am agreeing but… Either you buy the game new and the DLCs separately which costs more than this GOTY package (so you got a lower price) or you buy it used which will maybe result in pretty much the same price (and a scratched disc?), but every time you will have to “suffer” the DLC-thing. Yeah, they could have put it on a single disc, without costs for a second, at least on the PS3-Version and possibly on the PC too, but you have to download every time, so this never changes and you get a brand new… Read more »

To answer your question Uncharted 2 GOTY edition has 28 downloads via a voucher. Most of the downloads are avatars. There is no “download all” button so you have to click download- download in background on all 28 items. I had my PS3 running for 3 hours last night and I still have a ways to go. Not only would it be nice to have a hard copy of the content, it is quicker to install a disk, and most importantly not all people have their consoles hooked up to the internet. In 2K’s defense with Borderlands: it says content… Read more »