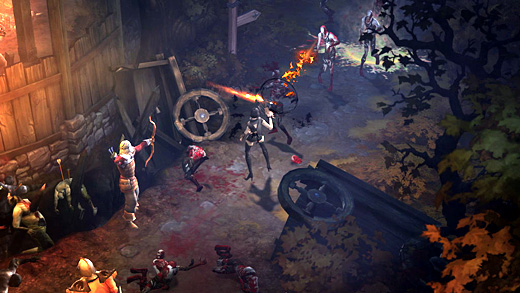 Although I don't play PC games at all, many people that I follow on Twitter and around the Internet do… and with the release of Diablo III, there were a lot of upset people because of errors and server maintenance that seriously limited the amount of available playing time on launch day. Many fingers were pointed at the "always online" aspect of the game, which solo players arguably felt unnecessary. If you believe what people say online, a fair amount of people took time off from work (sick time or vacation) to play Diablo III on the first day… which is understandable given how long fans have been waiting for this third installment.

Some of the reactions were admittedly over the top, just as we saw with the Mass Effect 3 situation a couple of months ago… but I get where this anger comes from. Paying $60 for a game that doesn't work when you bring it home is a frustrating experience. I've had issues with buying games during midnight launches before, as certain online components or content were disabled for 12-18 hours after I brought the game home. It's upsetting. Sure, the problems did eventually get fixed, but that doesn't at all excuse the fact that they happened in the first place. I've railed about not being able to access my DLC content when I bought my copy of Borderlands: Game of the Year Edition, and again when my online pass for NHL 12 failed to authenticate. The Diablo III situation is different, and arguably worse, but the idea is the same: Consumers did not get the experience that they paid for on launch day.

Unfortunately, a member of the gaming press thought to publish a piece that attempted to slap consumers into reality about the Diablo III situation. The author believes people should know that "the first few days of any popular release are going to be patchy." He tells consumers to "shut up" and "do some work", or to perhaps "spend some time with your family".

I don't know whether the intent of this article was to be funny, or whether the author was serious about trying to quell anger about the botched release. Either way, it's very poor form and the same kind of antagonistic writing that I strongly believe to be unnecessary in the realm of the gaming press. Maybe PC players are, as the author points out, used to broken launches… but if this happened to me as a paying consumer, you can bet that I'd be vocal with my anger regarding the situation. It's not the consumer's responsibility to understand why software launches go awry and why their games don't work as advertised after they've been purchased.

I get that some people are more understanding than others when it comes to situations like this. That's great. If you want to tell the complainers to stuff it, do it on your own blog instead of using a more prominent bully pulpit to rebuke others. You know what the better course of action is? Don't publish content like this at all. Let consumers complain themselves out, then smile when Diablo III finally works as advertised and the initial wave of anger goes away.

All an article like the one I've brought to light here does is damage the credibility and respectability of the web portal that publishes it, all in the name of drawing reactionary web traffic.

Thanks for writing about the downsides of journalistical behaviours. I think Patrick went way to far with his suggestions. On a personal level, I would even say insulting. But you can see where the industrie is heading, when even gaming news websites start pecking on gamers instead on the one’s causing all the trouble.

Keep up your good work!

While it could be true that you shouldn’t necessarily publish an article like that, I believe they need to exist. Pay attention to Metacritic on Diablo III, and there is an unbelievable amount of people who are downrating the game. While the rating does not really matter too much, the severe lashing out on the game is ridiculous. When the anger from the short period of server issues outshines the game itself, then something needs to be said against it. The servers are already working fine, and have been for awhile. But those ratings are going to stay and reflect… Read more »

Back in the day, before I shifted solely to console gaming, I was a huge Diablo fan. And now with the release of Diablo 3, I have been so tempted to buy a PC specifically for this game, but I won’t. This idea of online only single player gaming is a bunch of garbage. Even the best internet connection occasionally goes down. And what will happen if I want to play the game years down the line? Will it even work? The videogame industry has just left a bad taste in my mouth these past couple of years, with season… Read more »

Agreed wholeheartedly. Blizzard completely dropped the ball on this one, and there’s really no excuse for it given how much momentum they had going into the launch. It also underscores the fact that DRM only hurts the people who are paying for the product.