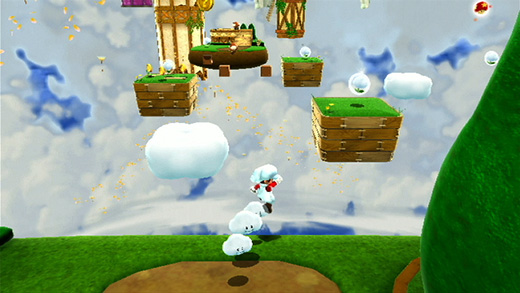 As we talk about almost every year at this time, the 2010 Video Game Awards are in the books… and I didn't watch it. After having watched the show for the last two years, and with my karaoke job coinciding with the event, I was fine trying to follow the event via Twitter.

I didn't miss much.

Sure, there were trailers galore… and next November was looking like a veritable gauntlet of software that nobody is going to have the money to be able to afford to run through. The awards themselves were a joke, as usual. Games won awards that weren't even at retail before they were nominated. Super Mario Galaxy 2 wins the Wii Game of the Year, but apparently isn't violent or "mature" enough to gain any consideration for the overall award. A music game wins a Best Soundtrack award, which is apparently different from a Best Score award. Halo: Reach was all but shut out, prompting conspiracy theorists to link this fact and Microsoft's decision to nix their Gears of War 3 announcement at the event. The host (naturally) wins an award for his own work despite more deserving nominees. Neil Patrick Harris goes "gamer" and shoots a bunch of dancers. Stay classy!

The Video Game Awards are little more than made-up honors for show sponsors that drain what little credibility that the video game industry has in mainstream circles and serves to enforce the "dudebro" stereotype that's been manifesting itself since the original Halo arrived nearly 9 years ago. The award nominations are allegedly finalized by a crack team of members from the gaming press corps… and we know how these people can't be bought or influenced. "Angry" Joe Vargas has the right idea; there needs to be a more diverse group that makes up the VGA panel in order to even begin to lend credibility and substance to these "awards". We need to get designers, PR people, and people from all walks of the industry to decide on nominees… not just reviewers who may or may not have an agenda or bias.

I'm starting to think that either I've finally grown up or that the gaming industry just doesn't care about "dinosaurs" like me. Either way, the VGAs symbolize a lot of what's gone wrong with video games over the last five years. The industry thinks that it's bigger than it really is and that it's almost bulletproof, although many in the business who lost jobs during this console generation would dispute that. Rather than let consumers decide what is best for them, the industry has decided to take the reins and tell us what we want.

I can sit here and type over a thousand words about how the industry is pursuing courses of action that will forever ruin it, but nobody pays attention. After all, I'm no Michael Pachter. I don't have a business degree and I don't go around saying controversial things just because the gaming press gives me license to do so. I'm a relic who just doesn't have it in him to adapt to this "new" gaming culture. I grow tired of having to senselessly kill things just because that's what the industry thinks that we all want to play. The higher cost of gaming is taking its financial toll, even though I still work in gaming retail… and when I do buy a game, it's buggy and generally requires a patch right away. (And it's worse on the PlayStation 3 thanks to its forced installs and updates.) Gaming is about Call of Duty XIV and Final Fantasy XXVII, while new ideas are cast aside and reboots of IPs that old gamers like me find intriguing are criminally awful. (See Splatterhouse.) Thankfully there were a couple of downloadable games that came out late in Q4 this year that seemed to turn back current trends; Pinball FX2 and Pac-Man Championship Edition DX are not violent and cannot be "beaten"; anyone can play these games and they require skill, strategy, and (in Pinball FX2's case) endurance from players in order for them to succeed. Unfortunately, these games are outliers to the current trend, and I doubt that we'll be seeing a pattern shift anytime soon… even with the critical acclaim that both games have gotten.

Perhaps I'm just old enough now to have my viewpoint clouded by how things used to be, rather than seeing things as they are without comparison. Maybe if I didn't have over three decades of history playing video games, I wouldn't know any different and would probably be a lot less vocal in my complaints. I'd see the VGAs for what they are rather than what they should be. I'd just go along with what the industry says I should do, because I wouldn't know any other way. Unfortunately, that's not reality. The reality is that there's a widening rift that separates the industry and myself over the form of entertainment that I love. I used to foolishly think that the industry cared about what I thought, even if that was just an illusion to foster loyalty and trust… but that illusion has been slowly fading, just like the industry's popularity bubble has been doing.

The market is not dictated solely by the publishers, telling us what we want to buy. That’s nonsense. Gamers bought and buy games that push and direct the publishers to make their plans. And so they finance games that may (or sometimes may not) sell according to what gamers bought in the past. Of course with some experiments… gamers can accept or reject. Gamers are the only group so far that accepted DRM. Music industry tried that too and failed. The market CAN decide. I think you and many gamers lost that thought some time. – look in any forum… Read more »

While I agree with some of your observations on the current state of the game industry, there are a few points that seem to be constants in your blog which, frankly, I find to be disgruntled whining about “the good old days.” I can’t speak with absolute authority on the matter because I’ve been out of the console loop for at least two years now (the last big console game i played was GTA IV); save for what I read on places like here and PA. Yes it does seem to be the norm now both with new console, and… Read more »

Even though you may feel like a “dinosaur” where gaming is concerned Peter, you’re definitely not alone with your feelings. I’ve been feeling like you have for a long time now, but I’m just at the point where I can’t be bothered to care; there’s nothing I can do to help make things better.

You know, I wish I could agree with you. I really do. However, I spend the entire show – the entire show being the 20 minutes or so before I turned it off in disgust – angrily trying not to punch my TV square in the face. It was difficult. If I thought that even a tiny fraction of the damage would have transferred over to those grinning goons casually patronising everyone and chortling about ‘World of Whorecraft’ I’d have set about the thing with a chainsaw and a baseball bat and a questionable sense of justice. Oh, okay. Maybe… Read more »