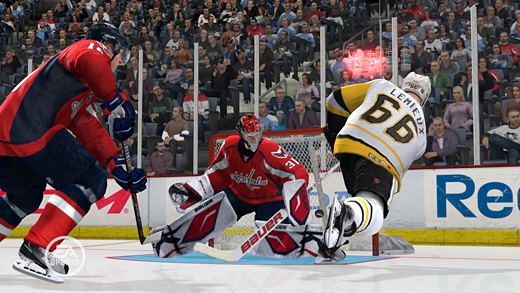 , and yet… attempts to redeem my pre-order bonus AND my Online Pass failed miserably. The content isn't working on Xbox Live (as of this writing) for whatever reason and the service errors out after entering the codes. Worse yet, the codes are now used and don't show up in my Download History.

Simply put, I now have half a game for $60 and my pre-order bonus is lost because someone screwed up. The frustrating part is that, while the pre-order bonus is something that I can live without, I'm unable to play the game online and now am faced with the possibility of paying an additional $10 for something that's being held for ransom even for consumers who buy new. Why? Why are consumers forced to jump through hoops like this? Do you think that you're owed something else aside from the money that you're already making? Why is it my problem that you feel entitled to make money on used game sales, and why are you using me as a pawn in your little war?

I've had enough. I'm done. NHL 12 will be the last EA game that I buy new, if at all. I'm sick of the crap. I'm sick of having to enter voucher codes to make my games work properly when they had done that all along with such codes for years. I'm sick of your converting what used to be cheat codes into DLC cash cow opportunities. I fear for the further ransoming of the single-player experience in favor of greedy DLC, like we saw in Tiger Woods PGA Tour 12: The Masters. I love sports games—I really do—but I have my limits and EA Sports has most certainly reached its limit with me.

I've never thought that Online Passes were a good idea, but I accepted them. I don't like that the other profiles on my Xbox 360 can't use the pass to go online with, but I deal with that. I've taken the other crap in stride up to this point, but when my Online Pass code doesn't work AND it's now been used? That's the end right there. It's not my responsibility to have to follow up with EA and show multiple proofs of purchase, hoping that I get a replacement code and that everything works all right. This should have been tested and resolved well in advance of the game shipping to stores… and yet here we are. Now the onus is on me to beg for something that, after paying for it, I should have access to and be using already.

I don't want to hear about technical issues, or "these things happen", or "EA will fix it." This is exactly the reason why Online Passes are awful. The used game consumer doesn't even APPLY here. The game just came out today. It's the new game consumer that gets screwed here and has to jump through even more hoops to play the video game that he (or she) bought outright. You got your money, EA. You got your money a few days ago, at least, when the retailer paid you for the shipment. Why is it too much to ask, apparently, for things to work properly at launch? Am I now "entitled" because I expect my purchases to be fully valid at the time that I pay for them? Without the Online Pass scenario, I'm playing the game online right now and not writing this blog entry. Instead, because of a certain publisher's own "entitlement" to the second-hand market, I lose… even when I buy the game brand new.

Maybe, when it comes to games with Online Passes, the only winning move is not to play.

Same thing happened to me, and I had the exact same reaction. There’s an easy fix for the online pass issue, though – exit to dashboard, launch the game, re-enter your code when prompted. It took 5 attempts for me, but it finally worked.

But yeah, screw EA. This + the whole microtransactions ecosystem they put in the game are absolutely nauseating.