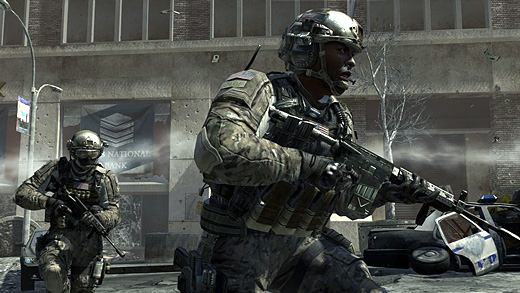 Modern Warfare 3 looked to continue that success. Sales in November were staggering, with over 8 million units combined across the Xbox 360 and PlayStation 3 alone. Sales at that time were ahead of the pace set by 2010's Black Ops release and things were looking up early. The momentum eased a bit in December, as combined 360/PS3 sales dropped by over 50% from launch. The numbers still seemed all right, but Just Dance 3 for Wii outpaced both the 360 and the PS3 SKUs in that month. This was a bit worrisome, but with the first DLC map pack due in January, it was thought that sales would maintain at least some momentum.

We all know now how miserable a month for the console gaming industry that January was, and Modern Warfare 3 was not immune to poor sales performance. This article from the Financial Times mentions a few notable specifics:

There are some nervous analysts and investors out there right now. We saw evidence of this on Friday with lower stocks over most of the video game sector. It will be interesting to see whether cooler heads prevail this week, ahead of the Vita launch and with a broader number of software releases shipping to stores this month. What's troubling is that, if fewer consumers are answering the Call of Duty these days, it could be another sign of, as Ben Schachter put it, "an industry-wide problem".

That problem would be fewer consumers, leading to fewer units sold, leading to less revenue being made. If Call of Duty falters, as staunch an IP as it has been, there may be stormy seas ahead for Activision—and maybe for the industry at large.

It is INARGUABLY the biggest and most successful. There is no way to argue with numbers.

I’m only posting because I am annoyed that you wrote that “Call of Duty,” has “arguably,” been the best and biggest franchise of this generation. I would argue that it’s not the best I would argue that it’s crappy. Your article though, is all about finance and money so you should have mentioned that at the beginning and said that it is INARGUABLY the biggest franchise. Because Call of Duty made more money than any other franchise and is therefore the “biggest.” There is no argument. Whether or not it is the best is immaterial to the rest of the… Read more »

mw3 just isn’t as good or robust a game as black ops. my bet is that treyarch’s cod game that’ll be released at the end of this year (probably black ops 2) will sell better. chances are it’ll include the popular zombie mode, plus a more interesting clever/fun story and atmosphere. there’s such an endless pile of po-faced war shooters out there, black ops’ b-movie goofiness combined with top-tier production values made it stand out and have better word of mouth. but beyond that, i find the fear around the COD ip’s eventual decline a little confusing. isn’t it inevitable?… Read more »