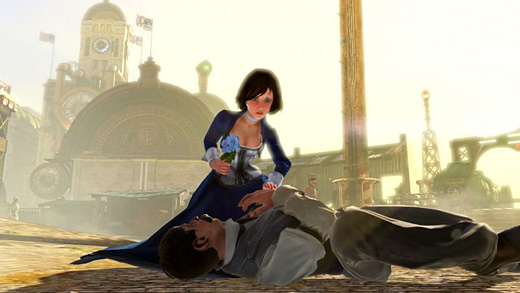 The announcement of the BioShock Infinite delay to late February of 2013 doesn't surprise me in the slightest.

The original October 2012 release date seemed a bit risky, given the already-impressive lineup of software that is slated to ship near the same time. Assassin's Creed III, Halo 4, Call of Duty: Black Ops II, Wii U hardware, and other games would likely have eaten into potential sales for BioShock Infinite. Would these other software releases have led to disappointing sales for Infinite? Possibly, but after a 2+ year hiatus for the IP, I think that Infinite would have held its own.

Let's look at some potential causes for the delay.

Ken Levine notes in his explanation of the delay that Irrational Games had "uncovered opportunities to make Infinite into something even more extraordinary." I firmly believe those "opportunities" are multiplayer options. Multiplayer has become fastened to almost every major game experience, and we even saw it with BioShock 2 in 2010. Job postings from within Irrational Games for Network Programmers seem to suggest that multiplayer is going to be added or tweaked in the coming months. From a personal perspective, I'm not too excited about more multiplayer, as I've had more enjoyment playing these games solo. From a business perspective, though, multiplayer is an easier avenue to additional revenue per user (ARPU). I can see why the decision may have been made.

2. Something else is coming

Analysts have been hinting that Grand Theft Auto V, which is another release under the Take Two umbrella, could hit stores in October. Wedbush Morgan analyst Michael Pachter said in a note that the Infinite delay "opens the window" for the game to see a release this year. He remarked that we could see some news about Grand Theft Auto V during the Take Two quarterly results presentation on May 22nd, or during E3. During some communication on Twitter, it also appears that Blockbuster put a preliminary date on Grand Theft Auto V of October 26th in the UK, which would likely mean October 23rd here in the US. I think that there's a bit of coincidence here, and am starting to lean a bit towards the conclusion that we do see Grand Theft Auto V this year. If not, the hole left by Infinite's delay will lead to revenue projections being revised downward for the holiday quarter—perhaps considerably so.

It's entirely possible that Ken Levine and the team at Irrational Games are working beyond deadlines and more time is needed to complete the product. Perhaps there's some extra fine-tuning needed for certain portions of the game. Maybe a few late-term additions (aside from multiplayer) were added. From what we've seen of the game so far, it's a pretty huge undertaking and projects like these do take some time. While not necessarily good for Take Two's near-term bottom line, improving on and making sure that BioShock Infinite is the best game that it can be should pay dividends to consumers when it finally does hit stores… hopefully early next year.

With Infinite being pulled from trade shows for the immediate future, we can look to the next few weeks to see if signs of Grand Theft Auto V arise. If they do, as I suspect, then I think we'll have our cause identified. It's a good thing for Infinite if this bears out, however; more time to polish a long-awaited piece of software is a positive. If we hear nothing during E3 (or before), then analyst speculation—and investor fear—over the delay will worsen. In either case, I think that speculation over Infinite becoming another Duke Nukem Forever or Final Fantasy Versus XIII scenario will prove false and we will see it hit stores in 2013.

Since we’re speculating here, why not the possibility of the game being delayed to incorporate features for a release on the WiiU?

i heard that rockstar isn’t going to be at E3 this year. if that’s the case, it’d be pretty unlikely for them to skip the chance to do a full reveal of gta5 at that point if the game were actually coming out this year.