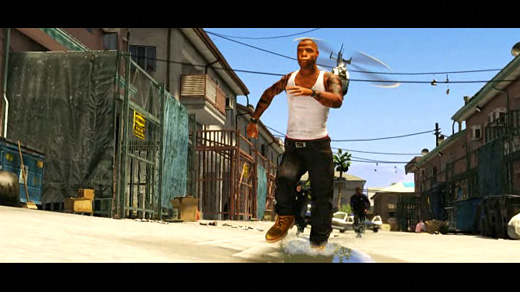 A press release, containing Take-Two's highlights and financial results from the 2012 fiscal year, was issued about 20 minutes prior to the earnings call. On the earnings release, Grand Theft Auto V is listed as a TBA (To Be Announced) release. Curiously, it's listed in the 2013 fiscal year lineup despite the unknown date. If you take the release schedule to be chronological as it's listed, then TBA could be inferred as March of 2013. I thought that to be a bit of a stretch before the call took place, given the announcement that XCOM: Enemy Unknown would hit retail in October and thus closing the window that the BioShock Infinite delay left open.

My opinion changed during the call, when revenue projections for the 2013 fiscal year were shared. Take-Two is expecting revenues for this fiscal year to be more than double what was taken in last year, to between $1.75 billion and $1.85 billion. That's also more than Take-Two made in the 2011 fiscal year, when Red Dead Redemption was such a big success. Take-Two CFO Lainie Goldstein also said this during the call:

Our expected revenue range assumes the on-time release of the titles we have announced to date, as well as other titles yet to be announced for release during fiscal 2013. We expect the revenue breakdown from our labels to be roughly 60% from Rockstar and 40% from 2K.

Now, if you look at the earnings projection of $1.75 billion dollars, it's estimated that over $1.05 billion is set to come from Rockstar. Even if Max Payne 3 sells 10 million units, that's only about 60% of the projected revenue that Rockstar is expected to bring in during this fiscal year. Something else needs to be released to close that gap.

The plot thickened further when Eric Handler from MKM Partners asked about how projected guidance could be hit without Grand Theft Auto V. Take-Two Chairman and CEO Strauss Zelnick responded with this answer:

We've announced that Grand Theft Auto V is in full development. We haven't announced a release date yet. What we have said about the year is that we have some titles that we expect to release that are not announced yet and we have a terrific slate coming up.

It's a sidestep answer, as Zelnick obviously doesn't want to tip his hand, but there is absolutely no certainty one way or another in this instance. There are two scenarios that come to mind. Either Grand Theft Auto V is the “unannounced” title or Rockstar has another project going that we don't know much (if anything) about. What's more, if you listen to the replay of the call (located via a link on this page) starting at the 39:53 mark, Zelnick's tone in response to Handler's question doesn't lead you to believe that he's denying anything. It didn't sound like a denial to me, at all.

I am thinking that Grand Theft Auto V is on track for a release during this fiscal year, ending March 31, 2013. I believe that it's possible that the game could ship during the fourth quarter of this calendar year, between October 1st and December 31st. I'd even go so far as to say that the October 23 date that Michael Pachter mentioned last month has a real shot at verifying. It makes some sense, given that it's two weeks after another Take-Two release (XCOM: Enemy Unknown) and two weeks before November's big guns like Halo 4, Call of Duty: Black Ops II, and the potential release of the WiiU. There's some concern how sales of Assassin's Creed III may affect Grand Theft Auto V, but given the strength of the Grand Theft Auto IP, Ubisoft could be the loser in this battle if a late October date materializes.

I'm not sure how much of a presence—if any—that Grand Theft Auto V has at E3, but news could come after the event. If after-hours trading and the spike of Take-Two stock is any indicator, then I believe that investors agree with me: Grand Theft Auto V will be here a lot sooner than many expected just a few weeks ago.