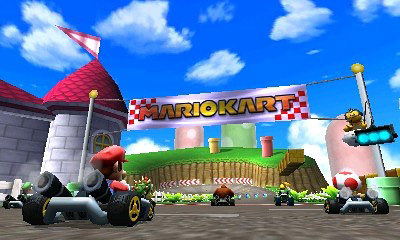 Microsoft has quite the streak going at the top of the NPD hardware sales chart, and the Xbox is still the platform to beat when January 2012 results are released tomorrow. Aside from a threat by the 3DS, which has been gaining sales momentum through Q4, the Xbox 360 doesn't look to have that much competition to defend against. Perhaps the biggest question is whether Year-over-year (YOY) numbers can be reached. 381,000 Xbox 360 units were sold in January 2011, which was 15% higher than in 2010. I don't see sales topping 381,000 this year, as there weren't any major software releases to stimulate sales in January. I think that Microsoft does emerge on top again, but will be looking at a second consecutive month with negative YOY and a sign that sales are slowing.

Nintendo will be looking to the 3DS remain strong in January. Expected residual interest in Mario Kart 7 and Super Mario 3D Land can be cited as factors, and there's a certainly a chance that the 3DS can stay close to Xbox 360 numbers. Gift card redemptions and purchases by younger consumers may also play a role in 3DS sales for the month. The big question for 3DS is whether the upcoming Vita launch may have some consumers playing a waiting game and making buying decisions in February instead. As for the Wii, last year's number of 319,000 units is likely a long shot. Outside of the holiday shopping season, there are fewer reasons to invest in a console that is on its way out. Bargain hunters may look to Wii, but I don't see Wii finishing higher than third place, behind the Xbox 360 and 3DS.

Sony is in a transition period as it prepares for the Vita launch in February. A weak slate of new software releases in January doesn't help the case for the PlayStation 3, and there isn't much—if any—buzz about Sony's console. Bundles, price drops, software exclusives, and Sony's free online service haven't been enough to sway consumers and I don't think this changes for January. The PlayStation 3 remains "the other console" and sees its comparative deficits to the Xbox 360 and maybe even to the Wii grow in January. Third place is the best possible scenario for Sony in January, and until a price drop hits or Microsoft reaches saturation with the Xbox 360, 2012 will likely continue this trend. The PlayStation 3 moved 267,000 units last January, and I don't think sales this January manage to hit that target.

Overall, I think that hardware YOY comparisons will be down for January. It won't be a huge decline, but with very few software drivers to push sales and with consumers struggling to pay down holiday spending debt, I think that we'll see some red. When Vita comes into play for February's results, along with the infusion of tax refund spending, I can see hardware numbers being a bit stronger… but not in January.

Look for a full analysis of available NPD data no later than Friday afternoon.