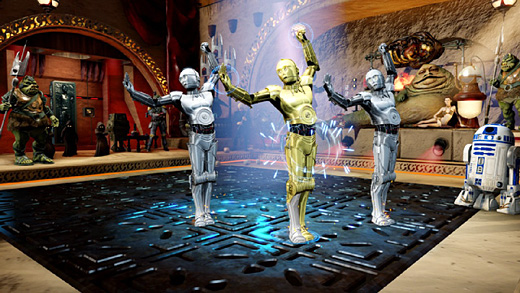 As it turns out, I correctly predicted the ranking order for hardware sales in April: Xbox 360, PlayStation 3, 3DS, Wii, then Vita. I came within about 20,000 units of predicting the actual Xbox 360 sales number of 236,000. I overshot it—as I did with the other platforms—but feel pretty good about getting more right than wrong when it comes to predicting hardware. I've had a decent record doing this, but predictions are only part of what I'm doing.

Mortal Kombat and Portal 2 combined last April to move well over 1.5  million units. Compare the significance of those two games with Kinect Star Wars, and Prototype 2. You really can't. Even adding The Witcher 2 to the mix, these games simply don't have the same kind of selling power as last April's slate of game releases. Without prominent and captivating game releases, consumers aren't going to spend money on software… or hardware, for that matter. Perhaps May will bring a better result with two releases potentially coming close to or exceeding a million units sold.

The 3DS has been a huge hit in Japan in 2012, but here in the US, it's languishing. Sales of the handheld here in April were less than 150,000 units, which is about half of what it sold in Nintendo's home territory. Defenders of the platform continue to fall back on the DS comparison and how 3DS is outperforming it within the first year, but most of those sales were in Q4 2011. Lack of significant new software is one possible reason for the malaise, but other factors like consumer moves to iOS/Android need to be considered. Perhaps a spike will come this month with the release of Mario Tennis Open, but Nintendo is going to have to deliver more games for the 3DS and try to encourage more output from its third-party publishing partners. Without games, there's no reason to spend the $170 on new hardware.

It's already difficult enough for those who don't have access to raw NPD data to have Sony continually refuse to share sales specifics publicly, but it's worse when Sony's Corporate Communications arm delivers NPD reaction that uses dozens of words to say nothing at all. The quote above is pulled from Dan Race, Senior Director of Corporate Communications for SCEA. Unfortunately for Mr. Race, leaked NPD data shows that if Vita is "gaining momentum," it's not pertaining to unit sales. Vita unit sales tanked in April, falling below 100,000 units after spending its first two NPD reporting periods over 200,000 units. At least in terms of retail sales, software is seemingly non-existent after the initial wave of launch titles. Yes, it's early, but very few consumers who haven't already bought a Vita are going to drop $250+ on a device that has very little going for it at this point. Even if E3 delivers promises of new Vita games—which should happen—there's no reason to buy near-term. There isn't a killer app out there right now, and until one becomes more than just a "Coming Soon" placeholder, sales of Vita hardware will continue to struggle. Even a speculated price drop may not do much without games to support it. Vita needs to be Sony's focus at E3, without question.

5. Are we saturated yet?

The Xbox recorded negative YOY hardware sales results for a fifth straight month, so it's been argued that the hardware is approaching a saturation point. I think that there's some merit to this argument, given that we're going to be entering its seventh year on the market and that 2011 sales of Xbox 360 hardware were very impressive. That 2011 success is also a bit of a monkey on Microsoft's back, since comps are hard to achieve a year later. Is it realistic to expect Xbox 360 sales to remain steady or improve this late in the console cycle? I don't really think it is. Having said that, I do believe that the negative sales trend will continue and that I'm seeing a parallel to what we saw with the Wii. Waiting too long to act when your current console's sales begin to fall can be costly. Even with a recommended price drop, I don't see sales reacting positively for very long. Even when Halo 4 hits in November, can we expect another 1.7 million Xbox 360 units to sell? I'll answer that question very plainly: No.

Hopefully things will improve this month. Diablo III and Max Payne 3 show promise. Will they be enough to break this losing streak? We'll find out in a few weeks' time.