The post-apocalypse is a cruel mistress 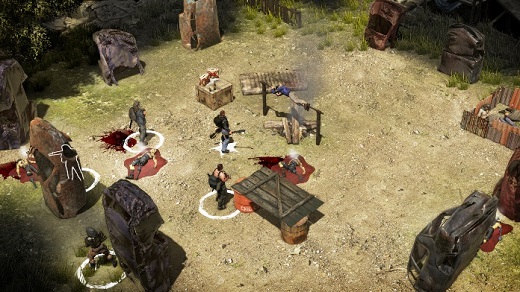 HIGH The satisfaction of wiping out a whole pack of raiders via tactical genius.

WTF Continuously shooting wide of enemies, even at close range.

Everything old is new again in gaming, with an unprecedented influx of retro-flavored titles popping up via Kickstarter and otherwise. However, this trend isn't surprising when it's realized that many of today's players and devs are well into their 30's and 40's with gaming kids of their own.

As one of the prime examples of this resurgence, Wasteland 2: Director's Cut is a brilliant throwback to the challenging tactical role-playing games of PC yore; the kind ripe with dramatic plot twists, oodles of character dialog, and unforgiving battle systems requiring meticulous resource management.

Wasteland 2's premise is a simple one: a nuclear holocaust has left the world a biohazard-filled mess that's overrun with gangs, mutants, and natural resource shortages. The player's mission? Lead a pack of would-be law enforcement ‘Rangers' to keep the peace in an extremely complicated world.

Like most tactical RPGs, Wasteland 2's combat is built on a turn-based, grid-based system that makes use of action points. Movement takes one point per grid square, with each action or weapon use having its own requirements. Logically, a diverse squad is the best squad, and it's also of utmost importance to use cover well. That said, the narrative side is every bit as important as the combat.

Surviving the post-apocalypse (as one would suspect) is no small feat. The law is barely tolerated even when doing good, and there's a lot of grey area to be found as well. For example, gangs of raiders holding a town hostage might also be protecting the same individuals from something more dangerous. Along the same lines, political intrigue is plentiful, and Wasteland 2 forces a deliberate taking of sides. Spoiler: the Rangers are almost always on the wrong one. The horrible feeling of limping away from a costly victory only to be lambasted for doing so feels gutwrenching.

With perhaps the richest character dialog system I've ever encountered (significantly upgraded from the original PC edition) decision-making is a robust, well-thought-out process. As they level up, Ranger team members can advance negotiation skills and open up a slew of different conversation options. For instance, choosing to be a bully can impress another Ranger via bravado… But it can also result in a would-be ally unleashing their displeasure as well.

It's important to note that Wasteland 2 honors its retro heritage in ways other than the structure and narrative—even on its easiest setting, it's unapologetic in punishing player and team mismanagement. Reckless decision-making will always in end in quick death, and ignoring aspects of character advancement are just as harmful.

Nowhere is this more evident than in Wasteland 2's clever location travel system. Crossing the territory is a constant risk-versus-reward gamble. Travel too far from safety and players are in danger of running out of water or encountering strong bandits. On the other hand, brave Rangers will opens up hidden locations and new opportunities.

After putting a hefty chunk of time into Wasteland 2, I was reminded why the tactical RPG was so popular, but also still very much a niche. Employing winning strategies and racking up victories is a sweet thing, but Wasteland 2's painstaking micromanagement of every aspect of the game feels like a constant burden.

Apart from the constant need for attention, Wasteland 2's transition to consoles isn't seamless. Menus are cumbersome to navigate, clearly intended for mouse-based interaction and keyboard shortcuts. Simple actions like healing buddies or sharing items requires far too many clicks. Related, the lack of an omnipresent HUD combined with a finicky camera means a whole lot of wandering to nowhere.

Wasteland 2's weapon targeting can also be frustrating. Some guns miss at almost every range for no statistical or logical reason, and even close up, certain weapons fire high and wide almost all the time. It takes a long while to modify and upgrade weapons, so this builds frustration quickly.

I also feel it's my duty to mention that the game's learning curve is astronomical. It took me almost five hours before it even started to come together. Most notably, the hidden action and combat wheels (L2 and R2 buttons, respectively) pretty much run the show. Wasteland 2 also becomes an entirely different game as characters level their skills up. The importance of these skills—and how to use them—is initially hard to discern.

Despite these negatives, Wasteland 2 kept one coming back for more. As I put in more time, the game kept opening up and more of my own light bulbs lit with the realization of potential. There are seemingly endless things to explore and ways to play in Wasteland 2. I could see a dedicated gamer easily putting hundreds of hours in, and for fans of the tactical RPGs or those eager to dip into retro-styled titles on modern technology, the Wasteland 2: Director's Cut is a terrific thing. Rating: 8.5 out of 10


Disclosures: This game was obtained via the publisher on the PlayStation 4. Approximately 25 hours of play were devoted to the single-player mode. There is no multiplayer option.

Parents: According to the ESRB, this game is rated M for Mature. This is a very adult game in its themes and dialog choices. Definitely not for the kiddies.

Deaf & Hard of Hearing: All dialog is accompanied by archived text, menus and interactions require no audio to succeed. Easily one of the PS4 best games in this regard.