Grilling me softly with his song. 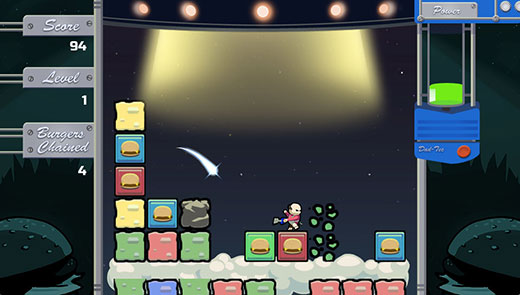 LOW Dying out of nowhere for seemingly no reason during a solid run.

After several decades and billions of dollars invested in space exploration, it appears the answer to discovering life on other planets was simply lying at the end of a proper spatula. Specifically, UFO Dad reminds us that a family that grills together is most apt to survive the alien invasion just around the corner.

To explain, UFO Dad reasons that chaining 3 or more like-colored, grilled burgers together is a surefire way to keep said aliens away. Sure, they can release a cheeky tractor beam to complicate matters. Still, enough combos and powers emerge. Dad's beloved yet simultaneously delicate grill is ready to turn a cornucopia of colored meats into mega points and then some. Every day is July 4th when the fate of the universe is at stake.

While the plot inherent in UFO Dad makes absolutely no sense, the gameplay experience more than capably fills in the blanks. At its core, UFO Dad is from the Bejeweled mold of lining up at least a trio of same colored objects, with more and/or chained combos exponentially increasing score. Where it differs from Bejeweled is a clever platformer mechanic, where characters can jump across objects, also manipulate them…to some extent.

This additional mechanic opens up an array of strategic options, as the quest to line up burgers includes flipping them up and across rows, also working with non/removable environmental objects that alter sequence paths. Meaning, burgers are subject to gravity from removing some items, also need to be skillfully worked around impenetrable ones.

Each of UFO Dad's objects possess different physics, further increasing noggin' work. Burgers will remain aloft except when they find themselves above a clearable item. Removing or moving this item then drops the burger. Let the record state, that "death by falling burger" is one of the worst ways to go, vegetarian or not.

At first, UFO Dad's mechanics seem both flawed and overly simplistic. Waiting for burgers to drop into combos is akin to watching paint dry. Likewise working around an irritating flaw of a cornered, airborne burger unable to be moved left and right, also soon-to-be-cleared burgers suddenly victim to gravity. Having but one life to live for your grill can get old fast. One mistake- often times a result of said flaws – is an immediate joy killer.

Last and audio- visually, UFO Dad is intentionally simple, as the 20mb footprint near mandates it. Pleasant graphics and sound exist throughout, with the character models certainly cute albeit nothing special. The music is retro whimsical, nothing to write home about.

Thus and in summation, UFO Dad is an odd but original puzzle-platformer for PlayStation Mobile and PS Vita. While flawed in places, it's certainly a welcome time. Rating: 7 out of 10

Disclosures: This game was obtained via the publisher and reviewed on the PS Vita. Approximately 4 hours of play were devoted to the single-player mode. There are no multiplayer modes.

Parents: According to the ESRB, this game is safe for Everyone.

Deaf & Hard of Hearing Gamers: While there are no subtitles, UFO Dad does not require audio cues and/or accompanying sound for a complete gameplay experience.