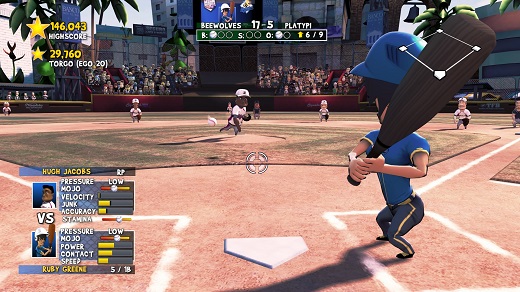 HIGH The walkoff win out of nowhere!

WTF That roster. Those names. Those faces. The umpire strike calls.

There's no questioning the sheer beauty of MLB: The Show, and how it wonderfully captures the ballpark and home viewing experiences. The game is a killer in finer points like player appearance, stadium capture and application of real-life performance skills toward in-game player ratings.

I buy MLB: The Show every year, and despite my appreciation of its production values, I barely make it through a couple dozen exhibition games. For all its splendor, it's just not that thrilling. Honestly, the last time a baseball game deeply captured my fancy may very well have been RBI Baseball or Bases Loaded on the original NES.

What made these old games terrific was an arcade feel that masked a surprising level of sim and strategy below the surface. It may not have The Show's budget, but Metalhead Software's Super Mega Baseball is the first baseball video game—and perhaps sports game, period—that brings the same balance of excitement and simulation back to modern consoles for me.

I find Super Mega Baseball to be a masterpiece, where a full nine innings can be played in almost no time, yet it remains chock-full of nail biting moments. The game relies heavily on computer-assisted fielders and a roster of pitches that remains the same regardless of who's towing the rubber, and these elements help to keep the game feeling like something I'd want to put quarters into.

The characters in Super Mega Baseball are absolutely hysterical, where my beloved Blowfish attempt to eke out wins backed by Keg Gutterson's flair for the dramatic. Sure, Simba Delano looks like an eighty-year-old Albert Einstein. He is, however, my guy for the 8th inning. And no one plays to the crowd better than Wanda Dregler, the literal ace in the hole of the pitching staff. The umpires; wow. Joanna Heater literally had steam coming out of her ears from missed calls.

As should be quite clear by now, with no major league license to worry about, Super Mega Baseball has a grand old time with crazy player models, wacky names, and hijinks galore. Hi-fives, crazy fans, and stadiums bursting with life create a terrific experience. Umpire calls had me in stitches with their voices and comments.

Behind the AI fielders and oddball players, however, is a very deep game. Working pitch counts and baserunning smarts are vital on the offensive side. Pitch selection, location and velocity are critical in the field. Player attributes truly mean something here, as high velocity/low accuracy pitchers will become batting practice in the wrong situations. Contact hitters will feast on fastballs, but can be overpowered and potentially jammed. Working a bench properly is key. Get lazy and get burned.

While relatively small in number, each of the 12 teams play incredibly differently. The differences are obvious due to the small rosters with only 3 bench players, 3 starters, two relief pitchers and a closer. Don't be fooled, though—there's something unique about every player in Super Mega Baseball, and the right substitution can make or break a game. Ditto for the three stadiums, where the dimension differentials become obvious…fast. If you're listening, Metalhead: expansion packs, please!

If I have to criticize Super Mega Baseball, it's that the subtle disconnect when attempting to jump or dive via manual control can sometimes lead to unwanted errors that can cost games. In most instances, surrendering control to the AI is the wise choice. Also, there's no online multiplayer. Not a problem for me as I prefer single player or local challenges, but it's a potential hiccup for online-centric gamers.

Those things aside, Super Mega Baseball is a gem, and perhaps the greatest indie sports game of all time. In fact, it's so good that big-budget sports devs need to take an honest look at it—there's a lot they could learn. For hardball fans, consider Metalhead's masterpiece a must purchase. Rating: 9 out of 10.


Disclosures: This game was obtained via the publisher and reviewed on the PlayStation 4. Approximately 7 hours of play were devoted to the single-player mode. Multiplayer is local only, with single game, player accomplishments shared via leaderboard.

Deaf & Hard of Hearing: All Super Mega Baseball menus, in game actions, and interactions are spelled out textually. No audio cues are necessary for successful play.

Nice review. I remember this game causing a minor sensation in sports-gaming circles when it came out late last year, but didn’t pay much attention for various reasons. Reading this review, it looks like I’m missing out. It’s also one of a couple of indie sports games released last year (the other big one being The Golf Club) which have had some success. This is a good thing, as the number of titles has been shrinking over the years and have been almost exclusively the domain of triple A licensed products, which are enjoyable but have narrowed the landscape considerably… Read more »