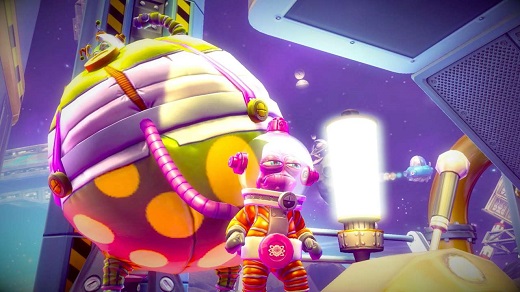 LOW The jumping physics feel a bit off.

WTF A game seemingly aimed at adults, but based on flatulence.

Good puzzle games are hard to find. When Activision announced its revival of famed PC brand Sierra via its new release Shiftlings, I had every reason to believe something special was on the horizon since Sierra (older gamers may recall) arguably perfected the puzzle-adventure genre.

Unfortunately, nostalgia usually distorts reality, and looking at things minus rose-colored glasses can be a bit harsh. Taking my soft spot for Sierra out of the equation, Shiftlings isn't as funny or entertaining as it thinks it is. It's a poor way to welcome back a historic brand.

Shiftlings is a puzzler where a pair of alien janitors are attached to each other with a hose. They alternate inflating and deflating each other's spacesuit by farting, with the goal of traversing an array of outer space settings. The inflated guy, while less mobile, serves as a springboard for the non-inflated buddy. He can also exist as a counterweight to pull the non-inflated guy up and over. In contrast, the lighter janitor can jump to and across platforms, and also fits in smaller spaces.

The key to play is determining when to grow or shrink each of the two aliens, with their attached hose a constant reminder of both opportunity and limitations. Decisions boil down to judging the proper size and buoyancy in a defined space. Defeat a cluster of stages, and the janitors toddle off to another place to clean.

For what it's worth, I really wanted to like Shiftlings. The visuals are beautiful, and it's a decently-produced package in general. However, the project is hampered considerably by confusion over who its target audience is.

On one hand, the cartoonish graphics, fart and squeak sound effects, and goofy character models are all prescriptive for a children's project. While playing for review, my wife openly questioned why I was playing ‘a baby game.'

On the other hand, Shiftlings contains borderline-adult content dialogue and commentary clearly intended (by complexity, not vulgarity) for the Teen rating it possesses. It's also incredibly frustrating at times, with level progression being anything but intuitive. Throw in some sketchy physics that require repeated attempts for success, and the result is definitely not a kid's game.

As a whole, Shiftlings is a good concept that falls down in the execution thanks to a lack of a clear identity, potty humor and poor physics. Although I had some good moments with it during the course of play, it feels a bit too mixed to recommend. Rating: 5 out of 10


Disclosures: This game was obtained via the publisher and reviewed on the PlayStation 4. Approximately 3 hours of play were devoted to the single-player mode. Multiplayer is available both locally and online (up to two, simultaneous players).

Parents: According to the ESRB, this game is rated T for Teens.

Deaf & Hard of Hearing: Audio is not required to play this game. Still, in-game dialog and cut scene messages are not close captioned.