There's some crazy things out in these woods. 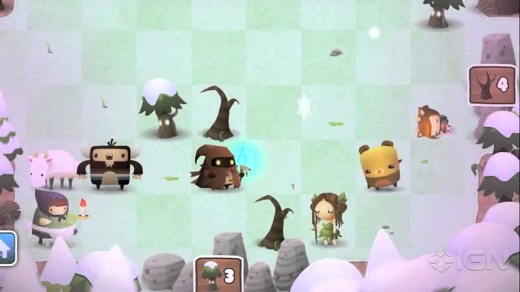 LOW Stuck in a corner. Again.

WTF The random craziness from throwing things into spiritual wells.

Because one is not enough, there are now two PS4 titles dedicated to surviving wacky woodlands. In Road Not Taken, the core gameplay is built around locating kiddies and returning them to their parents… Neither of whom can seem to fathom why looking for berries in the Forest o' Doom is not the best of ideas—they do it every year.

Road Not Taken is a puzzle/strategy game (versus Don't Starve's open exploration) with game mechanics tied to a limited range of motion and possibilities.

Each of Road Not Taken's levels are separated into discrete screens, and each screen is comprised of individual grid squares. The protagonist can move and interact with objects and enemies, and being a grid, these things move in deliberate, square-to-square fashion. Logically, the player's character can only move into unoccupied spaces.

This limited approach has its merits, as the learning curve is substantially lower than Don't Starve's very random, open (and occasionally frustrating) world. Instead of exploring a large area, Road Not Taken offers a finite range of movement, and action options are limited to carrying or tossing objects in the direction the protagonist is pointed.

Throwing an object or enemy into an open space fills it, but also opens up the grid square it was previously occupying. Therefore, it tests the player's ability to manipulate objects in a defined strategic space. It's almost like chess, but one can also combine objects to create new ones or new movement opportunities.

There's clearly a method to the madness, as each creature and object can be combined to create good things like health upgrades, or bad things like nefarious beasts that chow down on the player till death. (Oops!) Understanding and maximizing certain items in conjunction with the available space on each board is the difference between success and failure. (Also important: not getting eaten alive by angry critters or stung to death by ticked-off bees.)

Still, despite appearing to offering a wide array of options, Road Not Taken is a bit canned. It's one of those titles where designers seem to have a specific sequence or solution in mind for each level, especially since progression is often tied to combining a defined number of objects on the same screen. Ad-lib too much, and expect to be trapped in dead-ends on the grid, requiring tedious level restarts.

Also, perhaps it's my own bias, but Road Not Taken feels out place on a standard console. Rather, it seems tailor-made for the Vita or 3DS, where a ‘one more go' style seems better suited for shorter, portable gameplay sessions here and there.

Even with its limitations and occasional frustrations, Road Not Taken is always entertaining. Its artwork is stunning and whimsical; so much so that it's hard to resist invoking anger from enemy creatures simply to see their reactions. Poking bears is always good sport, Yogi. Non-playable characters are similarly amusing, sporting clever wit and one-liners.

Overall, it's hard not to recommend Road Not Taken for a nice distraction, and doubly so to those who grabbed it when it was free for PS Plus members in the past. Spry Fox does a solid job in presenting a polished, attractive-looking package, even if the gameplay doesn't quite meet the same standard. Rating: 7 out of 10.


Disclosures: This game was obtained via PS Plus program on the PlayStation 4. Approximately 3 hours of play were devoted to the single-player mode.

Deaf & Hard of Hearing: All Road Not Taken interactions are clearly spelled out in text and features subtitles throughout.