JUMP around. JUMP up JUMP up and get down. 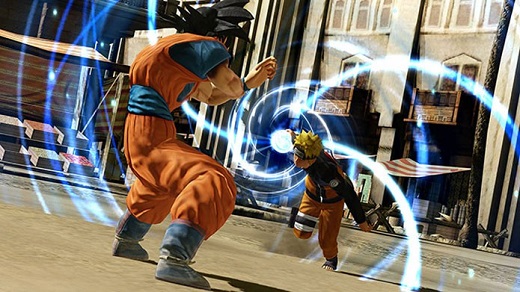 WTF A pair of giant, academic squids that insist on teaching me stuff…by fighting me.

The only people who should consider picking up J-Stars Victory VS+ are those who are enormous fans of the Japanese JUMP world made famous in manga and anime, and its quirky cast of characters. There's little more than passing value in this title apart from its status as a loving homage to the cast and franchises featured within.

The core mode in J-Stars Victory VS+ is an adventure where a selectable hero beats (and subsequently gathers) buddies to take on other groups of competing fighters via a worldwide tourney. They do so in a traveling ship, sailing to destinations and/or encountering other fighters. The story seems aimed at the 12-15 year old crowd, and the dialog is 100% Japanese with subtitles. This mode also serves as a much-needed semi-tutorial, as there is no standalone tutorial option elsewhere.

Mechanically, the game features 3-on-3 matches (2 active characters, one helping) in a large 3D environment with breakable objects. Each of these combatants sports an assortment of basic and power moves, along with block breakers and wide-swinging attacks. They also possess a special move (shoot a projectile, create a clone, etc.) with cooldowns. Defeat all three opponents, and win the fight.

J-Stars Victory VS+ plays a confusing and often terrible game of button mash. The simplified fighting controls and unresponsive defensive maneuvers form a marriage made in hell, made worse with horrific camera tracking. Even with manual lock-on, enemies are tough to visually track down, and the frantic, disorganized play means it's never clear on what's actually going on.

Moreover, certain characters are clearly overpowered. Even at low levels, fast strike martial artists and/or aerial attackers will put a beatdown on all who stand in their path. Where's the balance in one character having automatic combos stringing twenty hits together while the opponent can barely manage 5-6 strikes, at best? The same holds true for defending and power-up transformation effects. Several characters possess guards that are near-impossible to break, while the guards of others are the functional equivalent of wet tissue paper. Battles get boring quickly with such glaring discrepancies in power.

While the idea of having a 3D fighting arena with destructible elements is a good one, the combat doesn't cut it and the AI partners aren't any good, either. Coming in as little better than being absolute doofuses, the AI helpers can rarely be counted on to intelligently doubleteam an enemy or protect themselves. They also often fail tandem attacks, coming too late or at the wrong places.

For those who love the characters and can power through the battles, experience points will be earned which can unlock other characters. As J-Stars Victory VS+ is woefully short on the number of available fighters at the game's start, this acquisition/expenditure becomes vital to maintain interest.

To be fair, the game's roster is huge…dozens of JUMP characters from Dragon Ball, Bleach, One Piece, Naruto, and more make appearances. Sadly, their graphical representations aren't very good. It appears the PS4 has conquered the framerate issues of the PS3 version, but the devs kept the last-gen visuals. A shame, as I suspect this game could be beautiful if it pushed more polygons and went heavier on the cel-shading.

So, overall, J-Stars Victory VS+ doesn't look all that hot, offers inconsistent controls and camera, and features wildly unbalanced characters. While it was admittedly awesome to see Vegeta from Dragon Ball power up in a manner 100% authentic to how he is on screen, there's just nothing here for those who aren't already sold on the characters and franchises. Rating: 5.5 out of 10.


Disclosures: This game was obtained via the publisher and reviewed on the PlayStation 4.  Approximately 4 hours of play were devoted to the single-player mode, and it was not completed.

Parents: According to the ESRB, this game is rated T for Teens. Some violence…but mainly of the cartoon variety.