Its reach exceeds its grasp 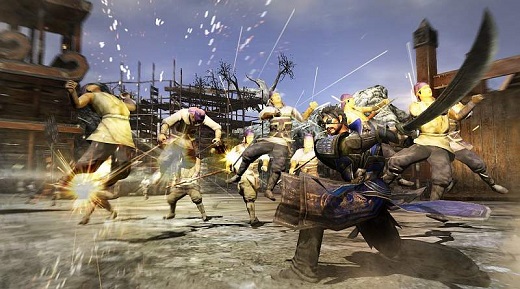 HIGH The thrill of watching the kill-count rack up over a thousand.

WTF Picking off enemies running alongside you… to nowhere.

He was fearless, and lobbing bombs across battlefields regularly earned him upwards of a thousand casualties and many epic victories. No one dared stand in his path! He plowed through enemies like a scythe cutting wheat, and always with a devilish grin.

He also brazenly challenged Yellow Turban opposition from his Tianshui stronghold, but also showed a more compassionate side by frequently donating to the peasants and quickly accepting defeated leaders into the ranks.

Dong Zhuo and I spent almost 20 hours together. During this time, his iron grip tightened while morale soared. His captains were fiercely loyal. His marriage spoke of a true dynasty in the making, and neighboring provinces fell like dominoes.

As my rise to power with Dong Zhuo shows, Dynasty Warriors 8: Empires is able to tell a great tale, but unfortunately, it's ultimately defeated by its own ambition. Too much content is packed into too small a package, and what results is an overflowing hodgepodge of options that are poorly executed. I give Tecmo Koei credit, because packing such a sophisticated PS4 title into a Vita offering is borderline crazy. Thumbs up to the attempt for sure, but thumbs down in execution.

For those new to the Empires series (as I was) be warned — Dynasty Warriors 8: Empires has a learning curve roughly equivalent to getting behind the wheel of a Maserati without knowing how to drive stick. The tutorial doesn't help things, either. It's basically a simple glossary for the oodles of menus that bury a player in complexity.

The game begins with the player selecting a timeframe and hero from Chinese lore, and then an accompanying kingdom as a starting point. Each hero has their own weapon of choice with a commensurate fighting style.

As one might expect from something with Warriors in the title, battle is the staple of play here, and it's a grand affair. Via raids, invasions or territory defense, the chosen hero gloriously chops through thousands and thousands of enemies.  Move accompanying captains around a battle space to turn the tide in your favor. Execute stratagems to increase offensive and defensive capabilities.  Marry weapons to certain elements and boost hero abilities.

Once a battle's won, the next phase of play emerges, and ruling the hero's growing kingdom comes with an array of options.

Tax or be generous with peasants; both have resource and morale consequences. Upgrading hero and soldier capabilities simultaneously limits the ability to fortify bases during battle. Recruit and scout neighboring captains to boost a roster… but it can also create enemies. The distribution of resources can forge alliances or instill fear. All of these options are laid out at yearly war councils, and meeting annual goals reaps benefits in experience points toward leveled-up heroes.

As one might guess from everything I've just outlined, Dynasty Warriors 8 is a deep, complex title. It also took almost five hours before I could make sense of the options at my fingertips. This wouldn't be a problem, except the execution of said options is sadly poor on the Vita.

Simply selecting items and navigating menus can be a chore. Things that should be next to each other aren't, and this disorganization makes battle preparation more difficult than it should be. During combat, things really fall apart. The map information and the camera views are atrocious, and it's a constant challenge to decipher what the vital stuff is. Adding insult to injury, the touch controls do not work. Tap, tap, and tap again, but they never execute as desired.

Unfortunately, the graphics are also a low point, and arguably resemble a mid-range PS2 title. There's pop-up galore, lots of pixelating, and it's tough to tell who's attacking and from where. While strategy-centric games don't usually hinge on graphics, Dynasty Warriors 8: Empires has real-time battle at its core, and in this case, it falls woefully short.

Seeing these shortcomings is sad because it's clear that Tecmo Koei took a chance in bringing Dynasty Warriors 8: Empires to the Vita, and having something like this on a portable is truly a treat. The vast array of cool heroes, time periods, and customization provides endless re-playability. I'm guessing that those already familiar with Dynasty Warriors will jump right in, overlook the warts, and be thankful to have their favorite Chinese ruler on the road. For newer players who'll likely have an experience similar to mine, Dynasty Warriors 8: Empires is not a place I'd recommend they start. Rating: 6.5 out of 10


Disclosures: This game was obtained via the publisher for the PlayStation Vita. Approximately 18 hours of play were devoted to the single-player mode. There is a multiplayer option, but no time was spent in it since connection troubles were aplenty.

Parents: According to the ESRB, this game is rated T for Teen. Violence and themes are very sanitized, and the dialogue is non-offensive.

Deaf & Hard of Hearing Gamers: Everything in this game sports very clear text menus and subtitles. Be warned, however: the text can be small at times.

Reading this review, I just kept wondering one thing: how about the ps4 version. Does everything you just said still hold up for the PS4 version? Probably not.