Cleaning the world, one sweep at a time. 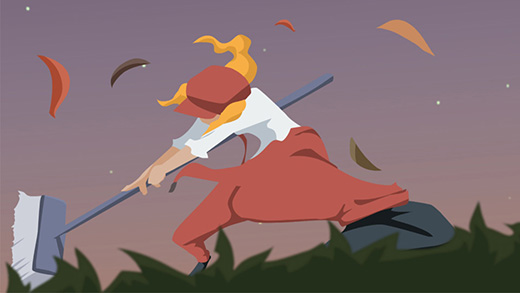 HIGH The elation of powering through a level with speed and elegance.

LOW Failing at jumps due to button lag, over and over again.

, I still can't fathom the thought process inherent in designing a platformer dedicated to acrobatic sweeping. This is a world where dust and debris can turn inanimate objects and pleasant forest creatures into raving killers hell-bent on staying dirty. Somehow, Hitbox Team conjured this world back in 2012 for PC gamers, and—thanks to Capcom—it makes its way onto the PS3 and Vita.

There's something ridiculously engaging about Dustforce, a challenging sequence-based game based on properly chaining movements across levels. When everything comes together, the simple (but beautiful) graphics, fluid movements, and fantastic soundtrack wonderfully mesh. Replaying levels faster and more efficiently and experimenting with each of the four uniquely-skilled characters to discover better ways to chain or traverse tricky jumps are must-dos. The only problem? Dustforce never truly comes together as intended.

In both the PS3 and Vita versions, there's an omnipresent button lag that's just noticeable enough to turn simple sequences into enduring chores. When crossing long distances, characters are required to strike mid-air objects to keep themselves afloat. However, because of this lag, the crucial strikes either off target, too late, or not registered at all. The same can be said about gentle turns on surfaces where characters appear able to cling and shift, but just won't execute as desired. For a game built on speed, this lag is infuriating.

Further, Dustforce desperately needs a quick refresh-to-checkpoint option and the ability to retry a level with a different character without being required to exit and re-enter. Some levels are designed with a particular character in mind, and without these functions, it can be a long, drawn out process of trial and error to discover this. These omissions (combined with the lag frustrations) place an omnipresent weight on what should otherwise be a fun and fluid experience rewarding mastery of levels.

With the above criticisms in mind, I went back to trailer and gameplay videos to see if I was simply crazy—after all, any honest reviewer will say that sometimes he or she doesn't ‘get' a title. After some research, I discovered that the lag and control difficulties are unique to the PlayStation Network (PSN) offerings. Fans of the original PC game uncovered no such obstacles, and their captured gameplay footage runs at breakneck speed in comparison. Messageboards dedicated to diehards of the game also echoed my sentiments about wonky framerates, notably on the Vita.

is certainly anything but unplayable, although I hope that a patch will soon follow to correct these issues. Rating: 6.5 out of 10


Disclosures: This game was obtained via the publisher and reviewed on the PS3 and PS Vita. Dustforce is cross-save, not cross-purchase. Approximately 5 hours of play were devoted to the single-player mode. Multiplayer was non-functional at time of review.