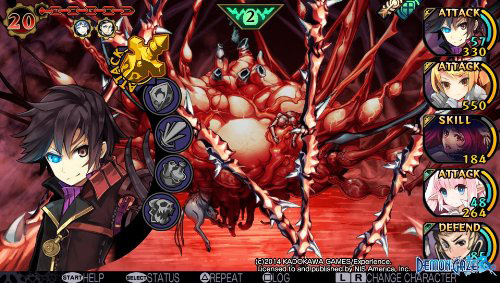 HIGH Using a captured demon for a perfect win in battle.

LOW Dying for the umpteenth time to lose everything at the hands of a stupid goblin.

As a veteran of NIS America JRPGs, one thing is for certain: there's a method to the madness, and the madness is appropriately named. NIS America's titles are Japanese to the core, and arguably not for newcomers to the genre.

To elaborate, each NIS America JRPG features a unique, nuanced battle system. In this instance, it's an ‘open demon' dynamic, where demons captured in turn-based RPG battles can then be used as allies. Enemies can appear randomly, or at key battle points.

While the protagonist class (the ‘Demon Gazer') is fairly straightforward with his main ability to ‘seal' and capture demons, the companion classes are incredibly customizable, coming in an array of races, abilities, and appearances…and nearly all are practically naked.

As with Dragon's Crown, I take no offense or celebration in scantily-clad characters, but rather, perceive them a reflection of an art style. In this instance, Demon Gaze

is a beautifully-depicted title, and one of the nicer examples of JRPG character art in recent memory. However, those of differing opinion on this topic may be a bit off put by the constant display of skin.

Skin notwithstanding, another staple of NIS America JRPGs is an incredibly high learning curve that beats players into submission. That holds true here. Demon Gaze offers no mid-stage save ability, so every battle becomes an all-or-nothing gamble where one more victory means just a bit more to bring back home. Die, however, and oodles of stage progress are lost in a flash.

At the beginning, this can be maddening. Characters are extremely underpowered, with several hours spent delicately traipsing through the easiest levels in hopes of making it back alive for the subsequent save. More often than not, such adventures end terribly, and back to the load screen we go.

Captured demons do help in the game's vast stages, but only in select doses. They can be ‘opened' or ‘closed' for battle, but overuse a demon and it will turn against the player. In the earliest levels—you guessed it—this often leads to more death. Getting sent back to the inn before re-tackling early dungeons is monotonous.

My biggest complaint with Demon Gaze

lies in its execution. It sports a fantastic battle system, but punishes far too often, and too early. The game would be better served in forcing strategy and planning in its fourth or fifth dungeon rather than its first and second, while the player is still learning. Moreover, Demon Gaze does itself no favors by slapping the hands of players courageous (or stupid) enough to pick up early-level teammates specializing in non-combat skills.

As with other NIS America games, I'm certain there's a strategy roadmap to increased success and battle progress, but I've yet to discover it. In its stead lies careful plodding through dungeons in hopes of surviving just one more battle… Rating: 6.5 out of 10.


Disclosures: This game was obtained via the publisher and reviewed on the PS Vita. Approximately 7 hours of play were devoted to the single-player mode and the game was not completed.

Parents: According to the ESRB, this game is rated T for Teen. Be aware that plenty of the characters are quite scantily-clad, so it might not be quite right for younger ones.

Deaf & Hard of Hearing: All in-game interactions are clearly spelled out textually, and likewise features subtitles throughout.