Adam and Eve are looking for a few good gamers. 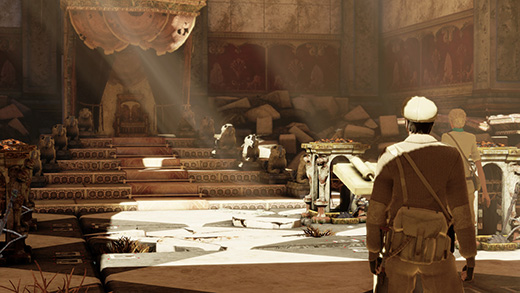 HIGH The sense of satisfaction in besting a challenging puzzle…

LOW …solving the same puzzle type three times over in an hour's time.

If the name Adam's Venture

rings a bell, it's for good reason. Chronicles is a combination of Dutch developer Vertigo Games' adventure puzzle trilogy ported onto the PlayStation Network.

Perhaps the most well-known fact about Adam's Venture is its unabashed place on the mantle as one of the few blatantly Christian, family-friendly games in the mainstream market. With this being said—and while the game possesses clear biblical undertones with Adam and Eve as its main protagonists—by no means is there a bible study barrier of entry. I would compare playing Adam's Venture Chronicles to watching Indiana Jones and the Last Crusade; some background knowledge of people, places and things adds enjoyment, but the absence thereof doesn't diminish the experience.

For starters, the game comes off as an average PS2 title, with visuals in need of some serious refinement to mesh character movements and screen refresh. Not a moment goes by where clipping doesn't stare menacingly back. Each bit of progression is accompanied by a subtle screen shake, and I offer these sentiments having reviewed this game on one of the top performing televisions on the market (Sony's KDL-47W802A) for input lag.

Level design is frustratingly flawed, and the camera almost never plays nicely, forcing an over-abundance of wandering to discover items and puzzles needed to progress. This exploration is rarely intuitive, but thankfully, glittering lights surround interaction areas and act as a much-needed compass in certain places.

Similar frustration emerges when combining timing sequences with hazards. Climbing ladders or making jumps is never easy, especially when the need to do so is under timed duress. Adam doesn't help—his movements are clunky and overly deliberate with each button press. Thankfully the difficulty of Adam's Venture Chronicles is a bit nerfed in these parts, and they can be overcome without too much frustration.

In contrast, the storyline and sound are bright spots.

The game's plot pulls right out of the bible, and in doing so creates a nice depth to what could've been a run-of-the-mill, archaeological lesson in patience. While Chronicle's 60-plus puzzles are oft repeated in exponentially increasing complexity, they possess clever themes thanks to their biblical undertones.  Still, some puzzles transcend challenging and become flat-out confusing, and it's ironic that the first puzzle out of the gate is perhaps the most confounding.

In terms of its sound, there are few better scores in an indie-developed game. Veteran game composer Jonathan van den Wijngaarden does a fantastic job in setting mood, and Chronicles' voice-overs that are not devoid of character. The dialog is cheeky but always conservative; no doubt a product of the ‘E' rating and Christian-oriented content.

As a whole, Adam's Venture Chronicles

is a flawed game that appears capable of so much more. I enjoyed the cleverness of the puzzles and the biblical theme capably added richness sans preachiness, but the presentation hampers it considerably. For a console release to the masses, Vertigo should've considered a proper upgrade in this area. For younger, puzzle oriented gamers—especially Christian ones—Adam and Eve can be good tomb digging buddies. Rating: 5.5 out of 10


Disclosures: This game was obtained via the publisher and reviewed on the PS3. Approximately 7 hours of play were devoted to the single-player mode. There are no multiplayer modes.

Parents: According to the ESRB, this game is safe for Everyone. It possesses religious themes.

Deaf & Hard of Hearing Gamers: Adam's Venture Chronicles does an outstanding job with subtitles. Every character interaction and audio cue is accompanied by comprehensive on-screen text.