This could be Heaven, but it's most likely Hell. 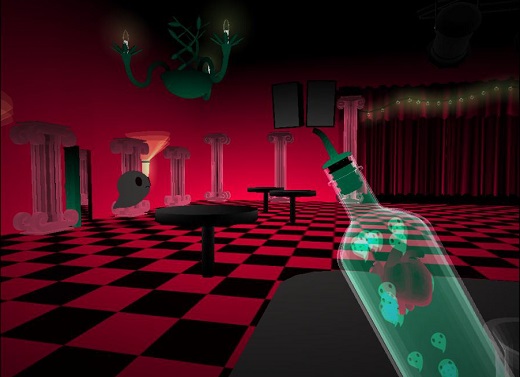 WTF: I watched a ghost puke up ghosts.

As a former bartender, returning to the craft in a game that lets me relive the magic of flipping bottles intrigued me—except this time, I'd be a ghost mixologist at the most popular club in the afterlife.

To be frank, I didn't know what to expect when I started playing Summon The Apgrod. I mean, I knew I would be a ghost and at some point I would either summon or stop something called "The Apgrod." Beyond that, I had no clue. However, after I "finished" the game a few times, I realized I wasn't sure if I ever did either.

I certainly enjoy a minimalistic approach, yet the game gives precious little to work with. As previously stated, I played a ghostly bartender who serves ghosts at a nightclub until the game ends. I was never entirely sure when the game was complete, but there were clear signs that I did everything needed to reach the goal along the way—but what is that goal? Revealing it would be a spoiler, which I won't do here.

Regardless, I served my spirits to those that filled the club, but many playthroughs yielded the same results with little variation. It didn't matter if I was a superstar specter or pathetic phantom behind the bar, the conclusion was more or less the same, leaving me to question what I was doing with my afterlife.

Continuing my confusion was the absence of any instruction on how to play or what to do once I started my shift. Starting off in first person with no prompts explaining what to do is disorienting. The controls and concept weren't difficult to figure out after fumbling around for a few minutes, but no sense of purpose ever coalesced. I was constantly wondering, "Am I doing this right?"

On my quest for answers, I equipped the three bottles of liquor I was given and mixed every combination possible, but Apgrod was never clear if I was mixing the drinks correctly. Sometimes my customers puked up tiny ghosts (really!) while other times they had a heart appear above their heads. Either way, they continued to thirst for more.

I even went as far as continuously giving some ghosts the wrong drinks, only to receive a neutral response. Eventually a show starts on the club's stage, and I found that no matter how I well or how poorly I poured, I would find myself at this same point sooner or later.

Simple concepts can be gold when the gameplay is engaging. However; Summon The Apgrod didn't engage me in any way other than to have me perpetually wondering what was going on. Unfortunately, there's just not a lot to pouring drinks and the experience became monotonous by the time I finally figured out what was happening. There definitely is a bigger picture in Apgrod, yet the lack of sense and direction means that these spirits do not make it to the promised land. Rating: 4 out of 10.


Disclosures: This game was obtained via Silversting and reviewed on PC Approximately 1 hour of play was devoted to the single-player mode, and there are no multiplayer modes.

Parents: Game not rated by ESRB. It contains mild alcohol use and is appropriate for children 10 +

Deaf & Hard of Hearing Gamers: There are no audio cues necessary to play or complete the game.