Look up the definition of Axiom for maximum enjoyment. 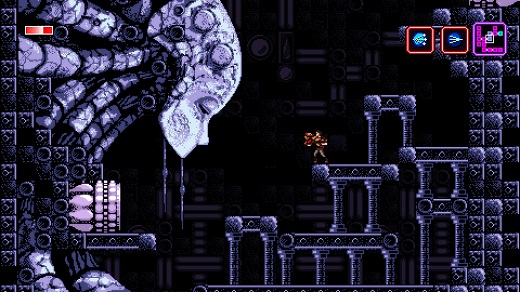 In 1987, Metroid fundamentally changed how side-scrolling games could be played. It was a literal game-changer and gave birth to a whole new genre. Though fans have frequently cried out for more Metroid and the style it perfected, there was a period when it nearly disappeared altogether, and it hasn't come back strong yet.

To fill the void, developer Tom Happ crated Axiom Verge as a near-perfect love letter to the original Metroid titles. It may mimic the atmosphere and style that inspired it, but it forges a new identity and creates an experience that's all its own.

Axiom Verge sets the tone of the adventure right out of the gate. Trace, a renowned scientist, is in the middle of an experiment when an unexpected explosion hospitalizes him. Left in a vegetative state, his consciousness is teleported to an alien world where he's tasked with saving its inhabitants from a deadly plague.

The second I emerged as a born-again Trace, the controls felt familiar — but oddly, a bit more like a Contra game than Metroid. Jumping and shooting work great (even in frustrating platforming sequences) and each new power I found worked in unexpected ways. Instead of Samus' trademark Morph Ball, I came across a mini drone that allowed me to scout ahead and fit in small places. Later, I picked up a stylish, yet versatile trench coat that gave me phasing abilities. Unfortunately, not every item was as enjoyable to use, and at times, they were even aggravating. For instance, the grappling hook seems to rely more on luck than skill.

As one would expect, exploration is a major part of Axiom Verge, but backtracking is generally kept to a minimum. That said, once most of the world is opened up, it's easy to get lost. I once spent over two hours searching for one specific area, only to realize that I had walked by it a dozen times. I highly recommend paying attention when NPCs share information — it will be important later.

Bosses and enemies slowly increased in difficulty as I progressed, with real challenge coming in the game's final hours. The last boss? A brutal experience. However, I was never overwhelmed thanks to the wide array of weapons I came across while searching every nook and cranny of the map. Every dilemma had a gun that was best for the job, and mastering the benefits of each was essential. With the exception of two hidden (and overpowered) guns there was a fine balance with each new pickup.

In terms of the narrative, the cutscenes and writing are cheesy, yet charming. Combined with the old-school art style, the game exudes an early 90s cartoon vibe. It didn't matter if the characters were trying too hard to be serious or spouting nonsense, I was thoroughly entertained. That said, the story had enough depth to make me care about what happened to the characters, and I felt motivated to find every secret. I wanted to completely unravel the mysteries of Axiom's world.

Tom Happ took great care when taking the Metroid formula and expanding on everything that makes it great, and it shows. Although I spent a bit too much time wandering around and I could have done without the eleventh-hour difficulty spike, Axiom Verge is an excellent Sci-Fi adventure that I'd recommend to anyone. Rating: 8.5 out of 10


Disclosures: This game was obtained via publisher and reviewed on the PS4. Approximately 15 hours of play were devoted to the single-player mode, and there are no multiplayer modes.

Parents: According to the ESRB, this game contains violence, blood, and language. The games pixelated graphics make any blood and violence mild. With occasional mild language this game is still appropriate for any child 12 years of age and older.  This info is found at ESRB.org.

Deaf & Hard of Hearing Gamers: Game can be played without sound, but certain audio cues are used for causing damage and hidden enemies and secrets.