Not to be Confused With the Horrible Adam Sandler Movie 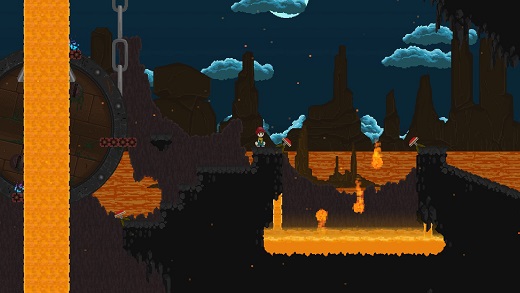 LOW Too long for its own good.

WTF The physics do whatever they want.

The most disappointing things in life are the ones that never quite live up to their potential. Take A Pixel Story, for example. It's like a close friend who's doing okay, but could be so much more if they'd just apply themselves. Disappointment aside, I still respect this title because it showcases the glory days of platformers and just how challenging they could be. It had me running, bouncing, and using my momentum to make it from one area to the next.

After playing through the intro, I was crowned with a magically-teleporting cap that can be dropped or thrown, making for some clever (and frustrating) puzzles. Why frustrating? The puzzles are well crafted, but the physics that determine how far the protagonist jumps, falls or launches are highly unreliable.

Timing a perfect jump and the amount of force I need to hit a spring with is horribly frustrating. I could slow my speed mid-air, but combined with having to precisely drop the magic hat and/or land on a safe patch of ground made things get out of control real quick. I respected the challenge, but being baffled by the mechanics had me fighting an uphill battle. There are also optional challenge rooms that can be unlocked in each world, but I would not recommend them—they are tests of madness.

Ironically, A Pixel Story doesn't have much of… a story. The hero exists in a computer where the master program has gone rogue. Born from a missed Pong ball gone astray (I am not making this up) the hero is given life and turned into a pixel-based messiah. From there the tale is told in bits that have no bearing on the goal.

Supporting the born-from-Pong concept is that A Pixel Story starts at the beginning of the video game era. When moving on to a new generation, the game gets a graphical boost and things get a notch more modern. The later evolutions start to look a little murky when they mimic today's styles, and sometimes it works and sometimes it doesn't, but it never gets so bad that it distracts from the gameplay.

Through it can be frustrating and seem downright broken at times, there's still much to enjoy in A Pixel Story. It genuinely has all the making of a great puzzle platformer, but it's sadly kept from its full potential by poorly-executed physics. Rating: 6.5 out of 10


Disclosures: This game was obtained via download code and reviewed on the PC. Approximately 15 hours of play were devoted to the single-player mode. There are no multiplayer modes.

Parents: According to the ESRB, this game contains: mild fantasy violence. This game is suitable for all ages.

Deaf & Hard of Hearing: The game can be played without hearing certain audio cues from items.