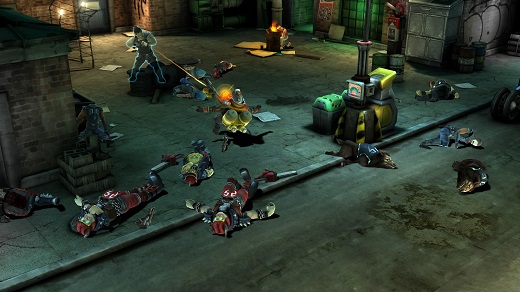 LOW Combines a weak Shadowrun experience with an even weaker MMO experience.

WTF Let's just stop trying Boston accents for a while.

Few games deliver the tactical thrill of summoning a ghost bear to flank a group of Orc gangsters like Shadowrun. Originally a pen-and-paper affair, this series took a lengthy hiatus from video games after producing seminal open-world RPGs on the Super Nintendo and Sega Genesis. (Let's not talk about the team-based shooter on Xbox 360 that that had no respect for the lore).

In 2013, developer Harebrained Schemes resurrected Shadowrun as a story-driven RPG with deep tactical combat and best-in-class writing. Seeking to capitalize on the newfound interest in the series, Cliffhanger Productions was commissioned to take the signature story and combat into the Massively Multiplayer Online arena.

The results are mixed.

Shadowrun Chronicles establishes its tiring gameplay loop early: go to hub town, talk to whoever has an exclamation point over their heads, head out on a quest, play a tactical battle, come back, repeat.

This type of loop is present in other successful online RPGs, but the complete lack of any meaningful social features makes the online feel unnecessary. Since I had no friends playing with me, I had to keep shouting into the lone chat window, hoping that other players were about to run the same mission as me. Needless to say, I played most of the content solo. Unfortunately, the lack of a meaningful narrative makes lone-wolfing a mind numbing experience.

Despite a clear respect for the established lore, the deep stories Shadowrun is known for aren't present at all. The dialogue is dull, and what voice acting is there is sorely lacking. Don't get me started on the phoned-in Boston accents.

Like other massively multiplayer RPGs, I ended up feeling like a faceless avatar that didn't make any actual difference in the world, and I completely lost interest before I was able to complete the campaign. Folks who enjoyed Harebrained Schemes's singleplayer entries in the Shadowrun franchise shouldn't be fooled by Chronicles; this game does not have what they're looking for.

If there's a silver lining here, it's that the isometric, turn-based tactical combat largely remains engaging and faithful to the series. While not all the missions are interesting, the lion's share provide tactical thrills. Assembling a team of mages, hackers, and warriors to outwit enemies is just as satisfying as it is in other entries, but not only is this Shadowrun Chronicles's saving grace, it's also the most infuriating thing about it…

If the online multiplayer had modern social features and an engaging story worthy of the IP, Shadowrun Chronicles: Boston Lockdown would be as essential as other recent entries in the series. Unfortunately, the fundamental issues leave it hard to recommend. In lieu, I'd suggest replaying Shadowrun Returns and Dragonfall instead. Rating: 5 out of 10

Parents: Blood and gore is minimal, though the backstory of some missions entertain adult themes. If it were rated by the ESRB, it would probably be Teen.

Deaf & Hard of Hearing: All dialog with NPCs and incidental dialog in the world is subtitled, and all chat with other players is done through text. No audio cues are necessary to understand the story or excel in combat.