Now with more pixels in each aggressively-pointed finger 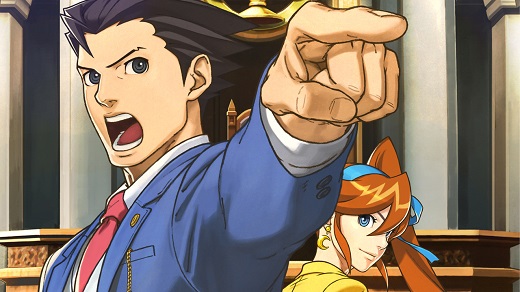 HIGH One of the best trilogies in handheld history preserved in a new, definitive edition

WTF Seriously, we haven't spellchecked the script through two remasters?

As much as I might groan about the recent trend of "remastering" old games, I'd say that the Ace Attorney Trilogy definitely deserved the updated release it just received. From the minute this wildly successful Japanese visual novel series hit American shores, it became a cult classic, and even the critics who bemoaned the lack of replayability couldn't deny the compelling story and immensely likable characters.

The twists and turns through awyer/detective/lovable oaf Phoenix Wright's career built an ardent fanbase (including me) that made the tiny print runs of the carts vanish, and buying them after the fact might have set one back $60-$100 until now. After an iOS port that largely disgraced the legacy of the original games, Capcom has brought the original Ace Attorney games to the 3DS eShop with updated graphics, but the timeless charm, wit, and intrigue of the masterfully told stories remains thankfully unchanged.

For those unfamiliar with the series, a recap: The Ace Attorney trilogy follows rookie defense attorney Phoenix Wright from his first day in court to his transformation into a nationally-acclaimed man of the people. Each game is divided into several cases, where players will split their time between investigating crime scenes, grilling witnesses for clues, and battling wits with prosecutors in the courtroom. Keeping with the visual novel genre, the majority of this takes place through guided conversations—there are no platforming sequences, combat scenarios, or obligatory ice levels.

Critics of the Ace Attorney games (and visual novels in general) will say that there is little agency given to the player, and it's true that a good chunk of Ace Attorney is simply reading what characters have to say. But, the courtroom battles are some of the most invigorating sequences I've experienced in any game. Picking apart testimonies to reveal lies or catching a smug prosecutor in a slipup that turns a case upside down brings an emotional high that not many RPGs or shooters come close to matching these days.

Further, the superb writing, hilarious jokes, and likable characters make even long sections of reading a pleasure. Gamers who have ever liked a title with a strong story, solid character development, sharp comedic timing, or challenging logic puzzles should give Ace Attorney a go, regardless of their feelings on visual novels, and this remaster is the perfect way to jump in.

Now let me preach to the Ace Attorney faithful for a second—ultimately I wanted two questions answered by this remastered trilogy: Can I still enjoy these games a second time, and has Capcom improved on the abysmal HD iPad port? The answer to both is a resounding yes.

Capcom disappointed with the iOS port in 2011. HD versions of art meant for a tiny screen were not done any favors when blown up on a 10" screen, and performance chugged bizarrely given the game's 2D, largely-text nature. Animations missed half their frames, buttons sometimes took three taps to register, and it was a huge mess overall. While some may still prefer the lovable, chunky pixel art of the original games, I'm happy to say that the up-rezzed art doesn't look bad on the 3DS XL, and things run at a snappy pace with no downtime or lagging. Technical performance isn't something I expected to praise a visual novel for but, it goes to show how truly abysmal the iPad port was.

After the initial high of seeing animations and buttons actually work wore off, my attention shifted to how much I was enjoying a replay of these games—I wasn't sure how much I'd get out of them given that fans and critics generally agree that there's rarely a reason to replay a visual novel after it's finished.

As it turns out, letting eight years go by before a replay made the games enjoyable again. I generally remembered large story beats only right before they occurred, and a lot of the minutiae (like decisive evidence and key eyewitnesses) I had almost completely forgotten. Devotees who played the originals might find that It's a lot like re-reading a favorite book years later.

Diehard fans of the original trilogy and newcomers alike, make no mistake—this is the definitive way to experience Phoenix Wright on new hardware, so jump right back in! These cases aren't going to (re)-solve themselves! Rating: 9.5 out of 10.


Disclosures: This game was obtained via publisher and reviewed on the 3DS XL. Approximately 30 hours of play were devoted to the single-player mode, and all three games were completed. There are no multiplayer modes.

Parents: Despite the constant comical relief and fantastical nature of the crimes in the series, there's no escaping the fact that Phoenix Wright games constantly deal with murder. Killings are never explicitly shown on screen, but discussions on the method of death, and pictures of dead bodies, are not uncommon.

Deaf & Hard of Hearing: The visual novel genre does not rely on any audio cues for completion of the game.