The welcome return of a genuine classic 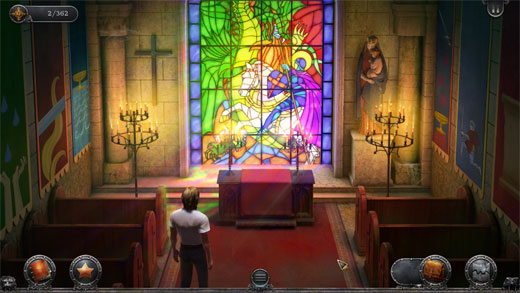 HIGH Still one of the best adventure games ever made.

LOW Janky animations destroy what looks beautiful in a screenshot.

WTF How does Gabriel's 1993 phone not have a "redial" button?

Gabriel Knight: Sins of the Fathers wasn't the first Voodoo murder-mystery adventure game, but it is widely regarded as the best.

The title character was a failed author struggling with writer's block, and guiding him through grisly crime scenes was a breath of fresh air for old-school adventure gamers brought up on far-flung science fiction and fantasy. With mature overtones, a gripping story, and meticulously crafted New Orleans backdrop, Sins of the Fathers occupies many best-of lists, and serves as the pinnacle of Sierra's golden age of point-and-click adventures.

As someone raised on games from that era—Space Quest, King's Quest, and other similar adventure titles—I couldn't wait to get my hands on the 20th anniversary remastered edition of this seminal adventure. The experience I left with is still rightfully one of the best adventure games I've played, but it's unfortunate that the remastering process was executed unevenly.

In line with its other modern adventures, Pinkerton Road studios has stuck with 3D character models interacting with 2D, hand-drawn backdrops. The backdrops themselves look exquisite—partly because they're designed for retina screens in a 2015 tablet release. However, the focus on photorealism and cramming as much detail as possible into each backdrop robs Gabriel Knight of the dark, brooding atmosphere and singular art direction held by the 1994 version.

The 3D models also don't live up to their promise, with several glitchy animations frequently breaking the pleasant interplay of 2D and 3D suggested by screenshots. Thankfully, important dialogues are done in either motion comics or in close-up "talking heads" dialogue trees, and those both look fantastic.

Also in need of a slight tune-up was Gabriel's womanizing attitude. It was present in the original game, but enough of the other characters poked fun at him that it was more comic relief than anything else. In this updated version, even Gabriel's faithful secretary Grace Nakamura seems to just grin and bear it, and the result left me feeling a little uncomfortable in spots. This problem is compounded by the fact that 2014 Gabriel looks completely dopey walking around, and don't get me started on the awful southern drawl of his voice actor. In fact, the voice acting falls pretty flat across the board (especially compared to the original's Mark Hamill and Tim Curry) but the molasses-like cadence of Gabriel's delivery completely kills the mood throughout the game.

With all that said, there are still aspects of the remaster that fans of the original should make time to see. For example, the pacing has been tweaked to provide a more consistent narrative experience throughout, rather than bombarding the player with options at the very beginning. A constantly-updating section of bonus materials also offers insight into its design, and how it was modernized in 2014.

For players new to the adventure genre, this package offers a great opportunity to play one of the best adventure titles ever made. The compelling crime narrative, intriguing characters, and great puzzles are all there, and an integrated hint system minimizes the need to alt-tab to a walkthrough. It's a shame that this remastered version squanders much of the charm of the original, though—I can't see it converting those cold on the genre, but fans and players interested in adventure gaming's roots would do well to check it out. Rating: 7 out of 10


Disclosures: This game was obtained via publisher and reviewed on the PC. Approximately 9 hours of play were devoted to the single-player mode, and the game was completed. There are no multiplayer modes.

Parents: This remaster of Gabriel Knight has not received a rating from the ESRB, but I would expect a T or M rating. The player will comb murder scenes and grisly photographs for clues, and the story features many mature themes. Violence is never perpetrated directly by the player, but it permeates every bit of the story. For reference, the non-remastered Gabriel Knight was issued a T rating by the ESRB for animated gore and suggestive themes. The more lifelike visuals of the HD remaster may ramp this up to an M upon release.

Deaf & Hard of Hearing: Subtitles are available, and all important gameplay cues are delivered through dialogue. None of the puzzles I encountered relied on audio cues to be completed.