The best playable infant sequence of 2014 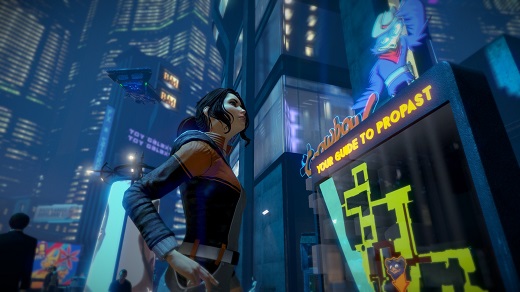 HIGH One of the most unique settings in gaming makes a comeback.

WTF Surely an on-screen map would be better than a talking crow cowboy?

Imagine watching a fabulous TV show where the main characters have been double-crossed just as they were about to succeed in their mission, imprisoned, and then put into a coma. Now imagine that for eight years, there is no concrete announcement of when the story will be brought to its conclusion.

The situation I just described? That's exactly what it was like to be an admirer of the Longest Journey series.

Dreamfall: The Longest Journey had one of the best cliffhanger endings in the medium when it released eight years ago. Since then, point-and-click has experienced a resurgence, and with Dreamfall Chapters, developer Red Thread not only has to follow two of the most beloved games of all time, but has to do so after the genre has greatly evolved. The first chapter, Reborn, largely succeeds as an introduction to a new episodic adventure, but at times it does get caught up in too-traditional design.

In this new installment, the stories of Zoe Castillo and Kian Alvane continue, each in separate timelines. Zoe fights to save the world from the addictive power of lucid dream machines in 2200s Europe. Kian resides in the technologically-advanced fantasy world of Stark, where he's been imprisoned for questioning the mission of the army he's a part of. Don't worry, the devs include a short recap video that goes over what happened in the previous games, and does a good job of getting new players caught up.

In terms of gameplay, Kian and Zoe must be guided through their respective worlds as they talk with other characters, make difficult decisions, and (much to my chagrin) combine seemingly unrelated items to make progress. It is true to the way adventure games are traditionally played, sure, but with such a tense and tightly-paced narrative, it was a real bummer when I found myself at a locked door with nothing but a pillow and a broomstick, left to somehow MacGyver these things together to solve the problem. Twenty minutes of exploring the environment and clicking indiscriminately on everything really sucks the life out of a narrative-driven experience that's only three or four hours long.

That isn't to say that Dreamfall Chapters is wholly regressive—overall, it can stand with the best of the modern adventure genre. The setting and story are gripping, the voice acting for the principal characters is best-in-class, and the ending leaves players chomping at the bit for the next chapter. However, the compulsion to tack on puzzles that can impede progress undermines the experience.

In a bite-size episodic game experience like this one, pacing is paramount. Fortunately, the momentum-halting blips are few and far between, and don't do much to tarnish the impact of the excellent narrative, characters, and art direction on display. And let's be honest—players just wanting to experience the story can use a walkthrough while they play. I believe that a happy, balanced design between the classic and the modern can be found, but Red Thread isn't quite there with Dreamfall Chapters yet.

At this point it's hard for me to place a bet on the quality of the series overall, but the opening chapter provides a strong foundation on which to build an engaging (and hopefully not too regressive) adventure game experience. Rating: 8 out of 10.


Disclosures: This game was obtained via publisher and reviewed on the PC. Approximately 4 hours of play were devoted to the single-player mode, and the game was completed. There are no multiplayer modes.

Parents: Dreamfall Chapters has not been rated by the ESRB, but I would anticipate it getting a rating of M. Cursing abounds in 2200s Europe, and the adult storyline references sex and violent acts often.

Deaf & Hard of Hearing: Subtitles are available in multiple languages, and dialog is most of the gameplay. None of the puzzles require audio cues to complete.

So, is the problem that this game has bad puzzles or that it has puzzles at all? It sounds like you’re saying it would be better as a Telltale-style interactive movie, but that’s never what this series has been, so it seems an odd complaint here.