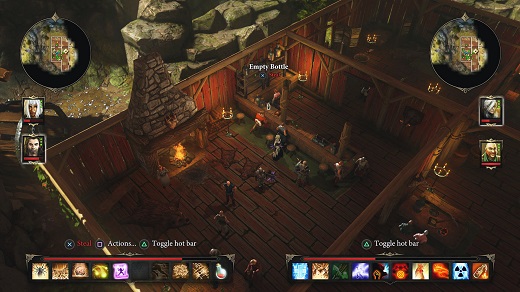 LOW A PC-centric UI means console owners will spend more time in menus than they'd like.

WTF A "quick" save that takes upwards of 20 seconds to complete.

I encountered a problem a few hours into my review of Divinity: Original Sin Enhanced Edition—I needed a talking, decapitated head that was on the table next to the town storyteller, and I just couldn't get it.

The decapitated head was not a fan of being an attraction for the general populace, and wanted me to take him to his body. The storyteller, however, was immune to my persuasion. An outright attack in broad daylight would bring the guards and mean certain death for me. I was about to give up on this sidequest, when I had an idea.

Using my Wizard's teleport skill, I quickly blinked the storyteller off a cliff, where he had a Looney Tunes-esque pause before plummeting to his death. The crowd around us was none the wiser, and I took the head back to his body without issue. In other games, this kind of solution may be seen as an exploit that needs to be fixed, but Divinity: Original Sin Enhanced Edition hearkens back to an age where RPGs celebrated this kind of player ingenuity.

Divinity: Original Sin burst onto the scene in 2014 as the quintessential successful Kickstarter story: diehard fans of a niche genre funded a passion project from a talented developer. While it initially appeared to be like several other old-school PC RPG projects up for crowdfunding, Divinity's open-ended turn-based combat system, humor, and constant insistence that players break its rules resulted in massive success. Today, it's the first game I'll suggest someone play if they want to get a feel for what PC RPGs were like several years ago.

Developer Larian Studios has now remastered their hit, rewriting most of the dialogue, improving the narrative, fixing a slew of bugs and—most notably—bringing the game to console owners. While its mouse and keyboard heritage makes for a clunky experience on a gamepad, Divinity: Original Sin Enhanced Edition is a one-of-a-kind experience for console owners who don't play on PC.

Like most other RPGs, Divinity has a relatively inauspicious beginning that escalates into the player being the lone agent capable of saving the universe. The execution was stilted in the original, but the Enhanced Edition beefs up the script, adds characters, and slows the narrative down so it seems a bit less like a Saturday morning cartoon. It's not going to win awards for writing or voice acting, but I will say that the revised story is enough of a reason for folks who beat the original to come back and beat it again. Perhaps as an outstanding couch co-op experience?

Players who opt to go solo will have a blast maneuvering their party of four characters around dangerous traps, exploring the wilderness, talking to everyone in town, and exploiting elemental weaknesses in XCOM-style turn-based battles. However, where the console version really shines is in the co-op I just mentioned, where two players complete the story together. I never saw incentive to play co-op on the PC, when I'd need to go through Skype to chat with a friend while playing, but having someone in the same room puts a new spin on the usually solitary RPG experience.

Treacherous late-game battles are more fun to plot out as a group, and brainstorming solutions to critical story problems is much easier when it can be talked through with a friend. Taking into account that the base experience in Divinity: Original Sin Enhanced Edition won several GOTY honors last year, the console translation, couch co-op and improved storyline make an already-excellent game even better.

However, the quality of the material doesn't mean that there aren't problems with bringing this sort of material to a new audience, though. Divinity: Original Sin builds upon Diablo III's success in bringing keyboard-reliant control schemes to a controller successfully, but the learning curve here is steep to the point that it may turn off fans new to this genre, and both PC RPG purists and newcomers to the genre will find everything outside of the action such as character customization and inventory management cumbersome.

Playing as a party of up to four adventurers, there are many times throughout Original Sin that necessitate splitting the party into smaller groups of one or two people, and each character has their own inventory. Players will inevitably pick up plate armor with their wizard, which needs to be passed to the warrior before they can equip it. Such inventory-swapping wasn't too bad on the PC where there's a function bound to every letter on the keyboard, but on PS4 it means multiple radial menus, drop-down menus, and scrolling.

This inefficiency of the controller at navigating menus designed for the PC hamstrings the smooth progression of the game, and players new to RPGs may be frustrated at how much time they spend in the inventory. Of course, players will eventually master the series of trigger pulls, button presses, and scrolling necessary to navigate the backend of Divinity, but it never feels like a fluid experience on a dualshock 4.

Difficulties with the interface aside, Divinity: Original Sin Enhanced Edition is an intriguing, challenging, relentlessly charming game that serves as a refreshing break from bleaker RPGs that have dominated the rest of the year. It absolutely shouldn't be overlooked by RPG fans who never played it on PC. For those who have played the original, enough has changed in the story and progression that the remastered edition is well worth a second purchase to play locally with friends. Rating: 9 out of 10

Parents: According to the ESRB, this game contains: blood and gore, and violence. Combat can get gruesome depending on the skills used (people exploding, loud screams of pain, etc), and some dungeons have large pools of blood and corpses strewn about. That said, the comedic tone of the story keeps the proceedings lighter than other M-rated RPG series like Fallout or The Witcher.

Deaf & Hard of Hearing: Subtitles are available for all dialog. Tooltips can be pulled up on the fly during the turn-based battles with ease. No important cues are missed with all subtitles on.

Are you sure you completed the entire game in just 30 hours? The game is about 80 hours long :p Maybe you just completed the first chapter?