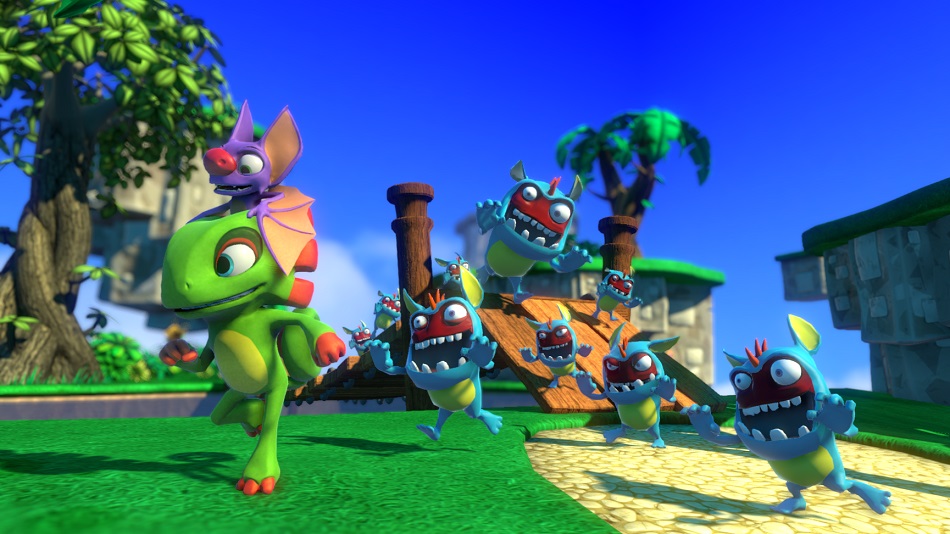 HIGH The initial rush of nostalgia.

WTF Turning into honey helps me climb icy slopes, but I still have low traction…?

Rare was once my favorite developer. I was a Nintendo 64 kid, and their work was arguably as instrumental to the console’s success as Nintendo’s own releases were. While Rare put out a lot of classics during that period, the one we’ll be discussing here is Banjo-Kazooie, a 3D platformer starring the eponymous bear-and-bird duo.

See, while Super Mario 64 was the unquestioned innovator and pioneer of that era, it was Banjo-Kazooie that perfected the formula, fine-tuning the mechanics and further exploring what could be done with 3D space. Even while in their prime, Rare never quite topped that piece of work, and since then they’ve been reduced to a hollow shell of their former selves. And hell, the mascot platformer has gone out of style anyway.

While Banjo-Kazooie is a relic from that period, a bunch of former Rare employees have attempted to revive that style of collect-a-thon platformer with a spiritual successor called Yooka-Laylee. The game was directed by Banjo-Kazooie’s lead programmer, and its art team is full of familiar faces. It is also, to date, the only Kickstarter project I’ve ever backed – that’s how hungry I was for this staple of my childhood to make a comeback, and how confident I was in this team to pull it off.

On the surface, Yooka-Laylee is precisely what I paid for. It’s a 3D platformer in which players explore open-ended levels and collect shiny objects, à la Super Mario 64. It’s vibrant and cheery, full of characters with big, googly eyes who speak in garbled gibberish. Awful puns are everywhere, and the dialog doesn’t break the fourth wall so much as it travels back in time and prevents the fourth wall from ever having been built in the first place. Returning composer Grant Kirkhope has brought along all of his old horns and xylophones for a soundtrack that’s as bouncy as ever.

Of course, the titular duo are now a chameleon and a bat, with a set of moves that only make sense with those two animals, like Yooka’s long tongue and Laylee’s sonar. But aside from that and a few edits to the terminology – collectible musical notes are now quills, Jiggies are now “Pagies,” etc. – there’d be nothing to indicate that this isn’t a proper Banjo-Kazooie sequel. That’s how pitch-perfect a recreation this is, aesthetically and tonally.

And yet, despite all of that, Yooka-Laylee is a massive disappointment, and it all comes down to one unfortunate truth — it is simply not a well-designed game. 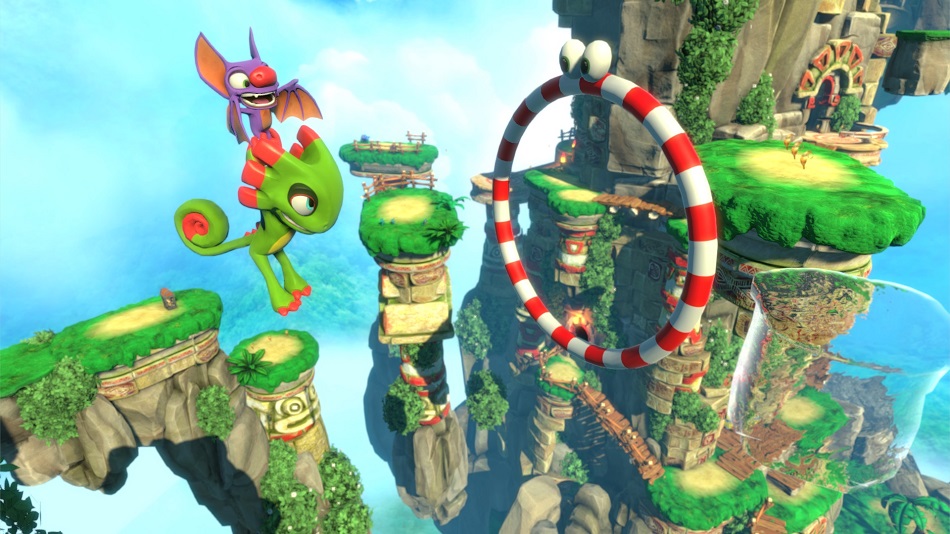 In the original Banjo-Kazooie, most levels were built around a central monument that acted as a visual analog – a stone arch, a giant snowman, whatever. We’d see that and have an immediate geographic understanding of where we were. Yooka-Laylee’s levels, in contrast, are messy and incoherent. There’s no focal point, and objectives are haphazardly laid about with little consistency, direction, or logic. The worst offender is Moodymaze Marsh – at no point in this flat, labyrinthine nightmare did I have any idea where I was in relation to anything else. The game is often lacking in vantage points from which I can even get a general sense of a stage’s layout.

To make things more confusing, each level has two forms, and must be expanded with found collectibles before all of its secrets can be unearthed. In practice, this means that the initial version of a world is rife with frustrating dead-ends. It got to the point where I didn’t even bother venturing into a new level until I could afford to immediately expand it.

There are only five levels, but there are 25 key collectibles in each one, meaning they’re all cluttered, overstuffed and thematically dissonant. In fact, there’s very little actual exploration, since most of the items necessary to progress are earned from NPCs who are just standing out in the open and want Yooka and Laylee to perform menial tasks for them. So, instead of being a game about discovering and conquering beautiful worlds, Yooka-Laylee is a game about wandering aimlessly in search of chores.

Further, the over-reliance on mini-games speaks to a lack of confidence in the core mechanics, and the bosses are just excruciating. Most of them have approximately a billion phases with little opportunity to heal, and one of them has the gall to be set within a mine cart mini-game that was already frustrating to control when it wasn’t combat-centric.

I recently revisited the original Banjo-Kazooie as part of the Rare Replay compilation and still found it to be the best of its genre, and I’m not one of those people who believes that a mascot platformer has no place in the modern gaming scene. I was ready to celebrate the return of this genre, but Yooka-Laylee is simply a chore to play. The folks at Playtonic have demonstrated that they can recreate the spirit of old-school 3D platformers. Now, critically, they need to recreate the quality. Rating: 5.5 out of 10

Disclosures: This game is developed by Playtonic Games and published by Team17. It is currently available on PlayStation 4, Xbox One and PC. This copy of the game was obtained via paid backer reward and reviewed on the PC. Approximately 16 hours of play were devoted to the single-player mode, and the game was completed. 30 minutes of play were spent in multiplayer modes.

Parents: According to the ESRB, this game is rated Everyone 10+ and contains cartoon violence and comic mischief. There are a few innuendos here and there that’ll fly right over kids’ heads, but it’s just a lot of hopping and bopping otherwise.

Deaf & Hard of Hearing Gamers: All dialog is text-based. I can recall one optional puzzle that’s solved using sound cues, but the vast majority of the game can be played without sound.