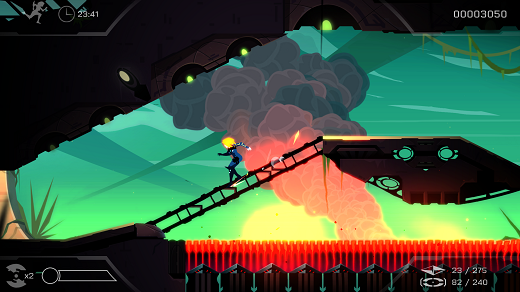 LOW Occasional putzing around when switching between two control schemes.

I've often said that the best sequels are the games that make their predecessors look like practice runs, no matter how good they were to begin with.

Velocity Ultra was one of the first games I played when I bought my Vita last year, and it was a standout in an already strong library. The soundtrack was kickin', the difficulty level was flexible enough to accommodate speedrunners and casual players alike, and the premise was ingenious. It was a vertical shoot-'em-up in which players could teleport through objects easily and instantaneously, making the game as much about navigation as it was about action. It was neat, but I have virtually no reason to recommend it now that Velocity 2X has expanded upon that idea so thoroughly. The original feels like an extended prologue to its sequel's hearty main act.

To begin with, Velocity 2X now juggles between two different play styles: the familiar top-down shooter bits, and the new side-scrolling interludes in which protagonist Kai (now donning a haircut that I call the "cyberpunk Skrillex") infiltrates alien facilities on foot.

When this mechanic is introduced, it seems as though Velocity 2X will switch between the two on a level-to-level basis, but it's a bit more smoothly integrated than that. Stages are always framed as piloting segments, but Kai will frequently have the opportunity to dock her ship mid-mission. The recurring objective is to open gates by hitting numbered switches in the appropriate order, and those switches are often located in places only accessible by foot.

The side-scrolling bits, in and of themselves, are fairly standard speedrunner-friendly platformer material, but they control tightly, fit thematically and complement the main game without ever taking center stage. Most importantly, they inject variety into Velocity 2X, and variety is the key component that makes this game such an improvement over its predecessor.

The on-foot segments offer a play style wholly new to the series, but it's many of the smaller enhancements to Velocity 2X's flow that keep the game interesting throughout the span of its 50 campaign missions.

The most prominent is the ability to drop teleportation beacons, which allow Kai to backtrack to earlier points in a level. Paths frequently split, and the beacons make Velocity 2X considerably more exploration-friendly than I'd expected, essentially forcing me to view levels in a different light than I'm used to in a vertically-scrolling shooter. Sequenced switches are often located down multiple paths, which means thorough combing of levels (and thus attentive use of beacons) is necessary.

On foot, the teleportation beacons serve a different purpose: Kai can toss them, which turns them into an unconventional platforming mechanic as players angle and ricochet throws to instantly transport to unreachable locations. Toying around with this ability drives home that for as much as Velocity 2X masquerades as an action title, it's really a puzzle-platformer, and a rather stylish, clever one at that. 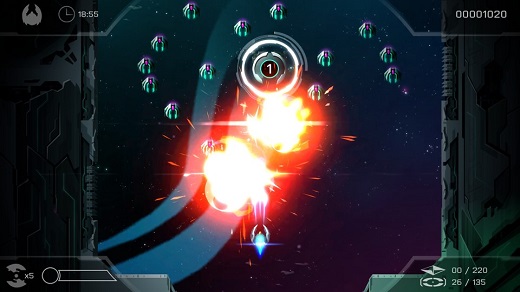 I confess that I'm still not particularly concerned with Kai's story, told through static images and witless dialog, but I'll accept it as a framing device for Velocity 2X's rapid-fire unveiling of new world aesthetics, new powers and new bosses. That last one is a particular sticking point, because while Velocity 2X is primarily a puzzler, it delivers when straight-up action is called for. My favorite was a boss that razed the arena with lasers that could only been dodged with quick, efficient use of the short-range teleport.

Another thing I loved about Velocity 2X is that its difficulty level is extremely flexible. The default pace is almost sluggish, but players can hold one of the triggers at any time to boost the game's scrolling speed substantially. Those looking for high scores will be doing this quite a bit, and there's satisfaction to be had in mastering Velocity 2X's dual control schemes, but those who want to approach the game's puzzles at their own pace won't miss anything. I've played many platformers of this ilk lately (of the Cloudbuilt and 1001 Spikes variety) with an all-or-nothing approach to precision, so it's a treat to finally stumble upon a speedrun-friendly title that's as harsh or gentle as the player wants it to be, while feeling equally clever regardless.

My one complaint is that there's a bit of discrepancy between the game's two control schemes. In the piloting bits, shooting is done with the X button. On foot, it's done with the right thumbstick, while the X button controls the jump. In a game that encourages perfection to the nanosecond, having to occasionally stop to think about which button does what can occasionally cost time. It's a small issue and one that won't affect players unconcerned with high scores.

One final note. While I reviewed this primarily on PlayStation 4, I did manage to spend a bit of time with the Vita version as well, and it's an absolutely stellar port. The developer made a big deal about getting the game running at 60fps on the handheld, and their effort has not gone unnoticed, as Velocity 2X is blazingly beautiful even on the small screen. The controls also handle equally well, if not better, since players can teleport by simply tapping the touch screen. It's a nice reassurance that anyone investing in Velocity 2X will be getting an outstanding game no matter where they decide to play it. Rating: 9.0 out of 10


Disclosures: This game was obtained via publisher and reviewed on the PS4. Approximately seven hours of play were devoted to the single-player mode, and the game was completed. There are no multiplayer modes.

Parents: According to the ESRB, this game contains fantasy violence. Cartoonish lasers and explosions abound; absolutely nothing of concern here.

Deaf & Hard of Hearing: Sound cues are used to let players know when to drop teleportation beacons, accompanied by a less-distinctive on-screen flash. That's the only instance I can think of in which being hard of hearing may cause problems, though it is a vital mechanic.

[quote]the smaller enhancements […] The most prominent is the ability to drop teleportation beacons[/quote] Those teleportation drops confused me already a lot in Ultra. I don’t like them, but they add some hiccup to the linearity keeping it actually linear with a sense of back tracking, so i accept them as means of keeping it interesting. I’d say the three twin/mirror ship levels are the more prominent enhancement because those twisted my brain and were new to the series. Other than the more powerful looking shooting, boss battles and the very last twin ship levels the ship gameplay is iirc… Read more »