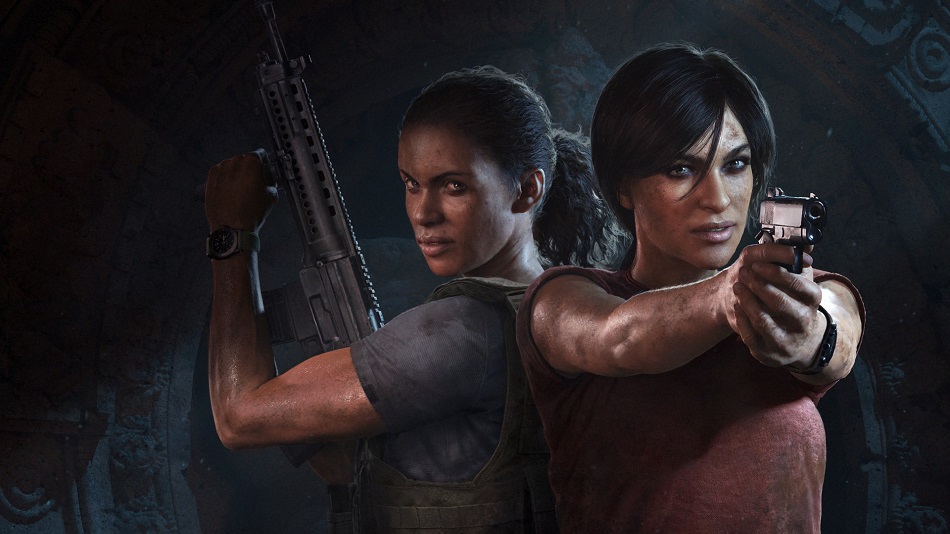 With a new protagonist, a narrower scope, and an expansion on the mini-sandbox idea first tested in the previous entry, The Lost Legacy presents the biggest overhaul that this series has seen in the decade since its inception. If anything, though, putting a cap on Nathan Drake’s story and ushering in a new era of Uncharted should have given Naughty Dog an excuse to take far more risks than they have here.

Said new protagonist is Chloe Frazer, a supporting character from previous installments whose snarky one-liners and family history of treasure-hunting make her the perfect replacement for Drake. Joining her is Nadine Ross, a former mercenary leader whose South African accent is noticeably more consistent than in her last appearance. The relationship between these two is in keeping with Naughty Dog standards – it’s all written, acted, and motion-captured with natural perfection. Their banter is funny and their rapport is believable.

The plot, however, is predictable Uncharted fluff. Chloe, tracing her roots in India, hires Nadine to find and uncover Priceless Artifact 738b from Lost City 342f before Mustache-Twirling Villain 844c beats them to it. One of the heroines is lying to the other about her intentions, and at least one of their destinations turns out to be a red herring. The whole thing climaxes in a combination car chase/train ride wherein the incessantly monologuing bad guy is offed over a painfully scripted quick-time-event slapfight. The protagonists, as always, get off scot-free. Also, I can only stumble upon so many mythical ancient cities before I stop gawking at the scenery and start wondering how no one since the invention of helicopters has ever flown over these places.

The inclusion of vast, outdoor vehicle sections was one of the better additions to Uncharted 4, and Naughty Dog has developed that concept here by setting the majority of The Lost Legacy in a single open location where players can drive around freely and complete objectives as they please. Although the game has no shortage of linear platforming sections, the free-roaming stuff is a welcome addition to a world in which we’re used to getting the monorail tour.

The reduced scope of the campaign also makes for a tighter narrative, though I’m weirdly mixed about the results. The Naughty Dog folks have openly admitted in the past that they design Uncharted games by concocting the setpieces first and only later devising the plot contrivances that connect them. The Lost Legacy being set primarily in one location means that the game feels nowhere near as scattershot. 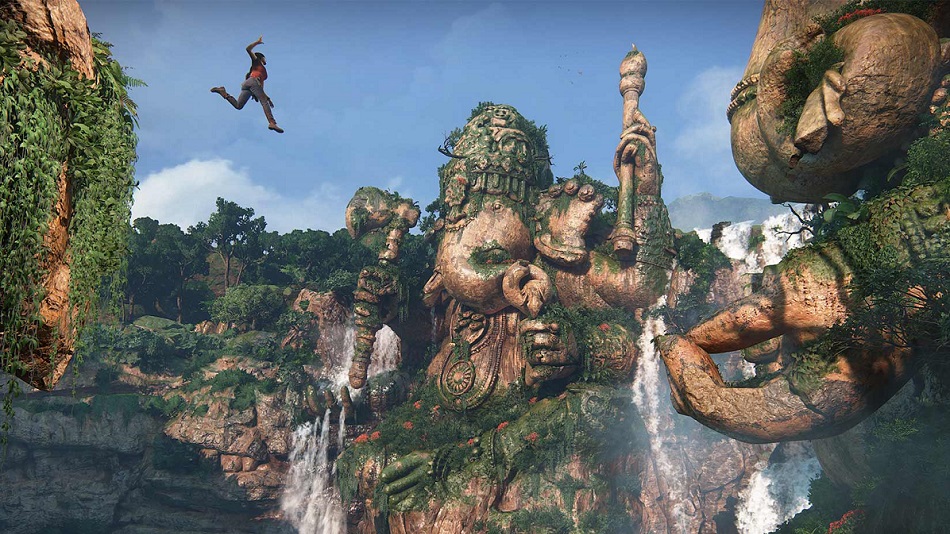 That sounds like a good thing, but while it results in a leaner and more cohesive story, it means that the setpieces which put this series on the map are far scarcer in The Lost Legacy. Now that they’re few in number, it’s easy to see that speeding vehicles and collapsing buildings did a lot to elevate a combat engine that felt sub-par even when cover-based shooting wasn’t on its way out.

The open-ended level design also means shootouts can often erupt from any direction and players will need to reposition themselves frequently, which only underlines the ridiculousness of Uncharted still not having a dash function. Also, why do guns recoil realistically when enemies still have comical amounts of health? Forcing players to rigidly control their fire only makes sense when an enemy can be downed in one or two bursts. Having to repeat this as a soldier picks himself back up four or five times reduces every gunfight to a plodding slog.

The larger issue, though, is that heavy, uncomfortable shooting mechanics like these have no place in a series like Uncharted. It was fine in a gritty, downtrodden survival tale like The Last of Us, but this is a series in which inhumanly characters are constantly falling from perilous heights and surviving without a hair out of place afterward. This is a power fantasy. Let it be a power fantasy.

The best thing I can say about The Lost Legacy is that, at a lean eight hours, it’s the first Naughty Dog title in ages that doesn’t overstay its welcome, and it’s launching at a price point to match. It’s also paced surprisingly well, saving its flagship setpiece for the final chapter that ends the adventure on a high note even if the final boss is dreadful.

However, the game also ends with the suggestion that Chloe and Nadine will be the ones to carry the mantle now that Drake is out of the picture, and while I like them as protagonists and commend a triple-A game for starring two women of color, their presence signposts a shift in creative direction that Naughty Dog didn’t follow through on. While plenty of fans might be content with Uncharted as-is, to me, liking this series means not wanting to see it become as irrelevant as The Lost Legacy feels. Rating: 6.5 out of 10

Disclosures: This game is developed by Naughty Dog and published by Sony Interactive Entertainment. It is currently available on PlayStation 4. This copy of the game was obtained via rental and reviewed on the PlayStation 4. Approximately eight hours of play were devoted to the single-player mode, and the game was completed. Two hours of play were spent in multiplayer modes.

Parents: According to the ESRB, this game is rated Teen and contains Violence, Blood, Language, and Use of Alcohol and Tobacco. Lots of shooting and explosions here, but nothing graphic – the most we see is characters’ faces getting a bit bloodied. The profanity is strictly PG-13. It’s all fine for teens.

Deaf & Hard of Hearing Gamers: Subtitles are available and there are enough visual cues that the game feels perfectly playable without sound. Just be advised that there is a lot of dialogue in-game, so players will need to spend a great deal of time reading as they’re playing.

Remappable Controls: A number of controller presets are available but they are not fully remappable.

I think I had a much better experience from my time with the game and was glowing with positivity upon it’s completion, but thought the antagonist in LL was a lot weaker than Rafe (who I always felt was a brilliant baddie, contrary to popular opinion). Annoying enemies in gunfights is absolutely a valid concern though, but all they have to do is stop the enemies from being bullet sponges and the combat is fine in my eyes. Being able to crouch at will would also be nice! This is coming from someone who did crushing mode on my first… Read more »

Nice Review, that almost describes how I felt after seeing a bit of gameplay and the trailers to the game. It’s more about the same, the same we already saw with Uncharted 4, makes you wonder if we’re finally at a point where fatique sets in and we should start demanding better effort from the likes of Naughty Dog that also brought us the amazing The Last of Us…