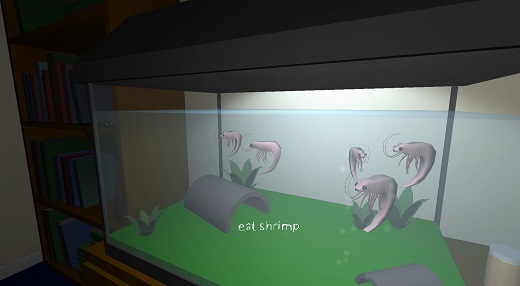 WTF Outsourcing the urination noise. It was really important that they got that right.

One of the worst things about dealing with depression is that no one else seems to really "get" it. Mental health is such a complicated and ambiguous science that people tend to have trouble sympathizing with it the way they would other ailments. Such is my interest in seeing the subject tackled in video games; given the medium's ability to immerse audiences, I've been waiting for a developer to really sell the issue, and to successfully transport players into the mind of a person weighed down by depression.

The latest attempt is The Static Speaks My Name, a sort of video game "short subject" from Jesse Barksdale. It's a ten-minute interactive narrative that portrays a man's final day before committing suicide. I have to imagine that Barksdale can personally relate to this subject, because his game is being offered for free on Steam, suggesting that he's more interested in conveying a message than turning a profit.

Despite that, most of Static left me scratching my head. I've fought some difficult battles against depression in my own life, so I can't feel terribly enthusiastic when a game purporting to explore the subject feels impenetrable even to me.

I think a lot of my frustrations with Static stem from how trite and unsubtle it feels. The entire game is set in the protagonist's apartment, and many of the details feel like the stereotypical image of how a mentally disturbed person acts. The windows are boarded up, a wall of televisions are all tuned to static, and there are messages written all over the place blatantly describing how the main character is feeling. People who aren't getting enough sleep don't scrawl "TIRED" repeatedly—that's cartoon logic.

Static does have some dark humor thrown about, which begs the question of how much is meant to be taken seriously, but there's so little game here that none of its ideas are given any breathing room. What we're left with is an experience that feels both hurried and just a bit tone deaf. It's too brief to leave an impression, and too unclear to make a point. Not helping is the fact that players are thrust into this story so late in the protagonist's journey. Without really learning anything about this person's history or how they came to be this way, Static trivializes much of what makes this such a complex issue.

Since the game can be completed in ten minutes, I'm trying to go light on details, but I'll elaborate on one thing that I really appreciated, and that's when players discover that there's no food left in the house and are forced to eat live shrimp from a tank. That's darkly amusing without undercutting the dread of a weirdly relatable situation in which the main character can't drag himself out of the house even for basic necessities. More astute touches like that would have been welcome.

Still, while Static didn't really work for me, it's short, it's free, and certain aspects of it are very much open to interpretation. I've been sitting on this one for a while due to a fear of misrepresenting a piece of art that I don't entirely understand, but I can still recommend that interested parties check it out for themselves and come to their own conclusions. I'd just recommend that no one aspect Static as canon. Depression is a much more complicated ordeal than Barksdale makes it sound. Rating: 5.0 out of 10


Disclosures: This game was obtained via publisher and reviewed on the PC. Approximately 25 minutes were devoted to the single-player mode, and the game was completed twice. There are no multiplayer modes.

Parents: As of press time, this game has not been rated by the ESRB. It's a game about suicide, so obviously the subject matter is quite grim, but there's nothing graphic about the content itself. There is, however, an IM conversation with some explicit sexual dialog.

Deaf and Hard of Hearing: The drone soundtrack contributes heavily to the atmosphere, but there are no vital audio cues and no spoken dialog.