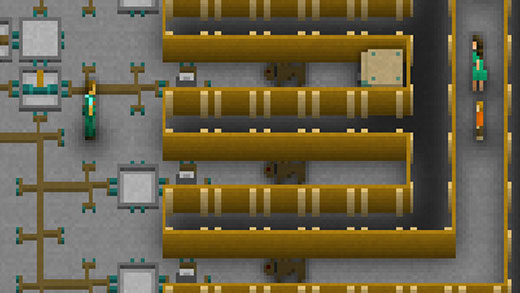 LOW Losing hard work after getting killed by a sleeping dog.

WTF This guy needs to empty his backpack to make room for the money and leaves his tools at the scene of the crime? What?

Shortly before the release of The Castle Doctrine, I was given alpha access to the game, during which time I found it difficult not to write the experience off entirely. It felt unbalanced, poorly-explained and altogether unfinished. I'm honestly stunned that what I was playing turned out to be the finished product, and that it's not even being released as Early Access. It's one of the most unwelcoming and unincentivized games I've ever played, content to roll by on an intriguing concept and full reliance on user-generated material.

The idea is solid. The Castle Doctrine is a multiplayer game in which players steal from one another whilst protecting their own riches.

Each person begins with $2000 and must fortify their homes to keep both their earnings and their families safe from invading players. They can build walls, set traps and even employ guard dogs, and then use any remaining money to purchase the tools necessary to break through other people's security measures.

There are two rules in designing a house: The player's wife and children must have an obstruction-free path to the exit, and there must be a failsafe way of making it to the deposit. In one of The Castle Doctrine's genuinely clever design choices, upon completion of a base, the player is then asked to reach his or her safe with no items, to prove that it's not inaccessible.

The Castle Doctrine's first problem is that I only learned all of this by watching the game's trailer after cluelessly fumbling about in the menus. There's absolutely no tutorial or even any in-game explanation as to what the objective is, or how the various items and fortifications are meant to be used.

That'd be fair enough if the game's "rules" were easy to articulate, and to be fair, some of this stuff is self-explanatory. Bricks are used to smash windows, saws are required to cut through wooden barriers, water can be used to short out electrified floors, and so forth.

But then there's the relatively odd fact that whenever I'd put a pit bull to sleep with drugged meat, it would still maul me to death—while it was sleeping—if I stepped on the same square. A puzzle game can't work if there's no discernible logic and reason to it, and that's doubly true for a feature-length puzzle editor, which is what The Castle Doctrine basically is.

The game's most baffling design choice, is that every tool is limited to one use. Since the wife of a household carries half of the money and is frequently armed, buying a handgun is essential, but each one costs $1200—more than half of a player's starting budget—and can only be fired once. Why can't I just buy more ammunition? Furthermore, if my character insists on spending $150 for a single brick, is there no reason that after smashing a window with one, he can't just pick it up and use it again?

Even more infuriatingly, all items are lost at the end of every robbery, even if they aren't used and nothing is stolen. If the player leaves prematurely, the character ditches his backpack for no discernible reason. If the player is successful, the character empties his bag to make room for the money, because he is the worst burglar in history. Any player who's rich enough to be worth robbing at this point probably has such a thorough mastery of The Castle Doctrine's editing system that stealing their goods requires both intricate understanding of their layouts and plenty of tedious trial-and-error to get to that point. Given how much of a gamble every attempted theft is, it's almost not worth the trouble.

Adding to the risk is the fact that whenever a player dies, for any reason, it's back to square one. Any money earned is lost, and any time spent on building a "castle" is undone. It's difficult enough to engage me in game-design-as-gameplay when I'd rather just sit back and leave that to the professionals, and it's downright unfair to erase all of my hard work every time I stumble into one of many quick and arbitrary deaths.

All of these problems like the steep learning curve, the punishing difficulty in a competitive environment, and the inconsistent "rules" already make The Castle Doctrine off-putting, but they're exacerbated by one question: What's the point?

The only objective is to make money, and this only serves to attract more intruders. The game is unbearably tense with no payoff aside from leaderboard honors, which can be lost in the drop of a hat, anyway. There were times in which I made money from players who died in my traps, rose in rank, and then lost my belongings when more players flooded to my house while I was away from my computer. It's tense when you're not even playing.

Like I said, I do respect the idea, and I'm slightly intrigued by the game's morbid undertones, particularly in the plain, unemotional manner in which it depicts the heinous acts that players are forced to carry out, like gunning down families or committing suicide. Any messages found in The Castle Doctrine's moral ambiguity, however, are drowned out by frustrating design choice upon frustrating design choice. It's a game that asks too much of the player and offers too little in return. Rating: 4.0 out of 10

Disclosures: This game was obtained via publisher and reviewed on the PC. Approximately five hours of play were devoted to the multiplayer. The game has no single-player modes.

Parents: As of press time this game has not been rated by the ESRB. It's a dark game. Players will frequently die, have their belongings stolen or witness their families being murdered. The game also forces players to rob other real-life people and potentially gun down women, children and pets in the process. The depiction of the violence itself isn't terribly graphic, especially since there's no actual animation,  but the implications behind it are fairly disturbing. It's really not for kids.

Deaf & Hard of Hearing Gamers: From what I can tell, there are literally no sound effects in this game at all. The ambient music adds nothing, and I imagine most players will wind up turning it off altogether. No problems here.