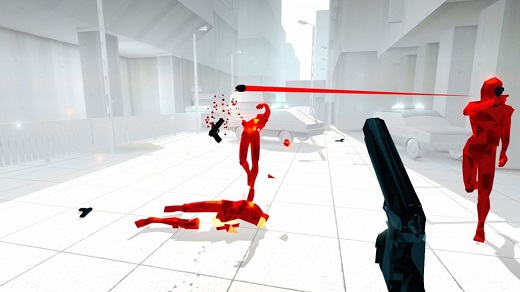 HIGH The fistfight in the elevator.

LOW Reaching for the "crouch" key, then remembering that there isn't one.

WTF The Easter eggs tucked into the menus.

We were all assuming that Superhot would be awesome.

It's a first-person shooter where time only moves when the player does. The premise has been earning the game a lot of hype, and rightly so—bullet-time isn't uncharted territory, but giving such complete control over the flow of action turns what should be a straightforward romp into something more akin to a puzzler or a turn-based strategy game. Granted, it controls like a standard FPS, but the pauses that occur when players aren't moving or performing actions provide opportunities to plan complicated maneuvers and dodge bullets.

One of the opening levels placed me in a corridor with no cover opposite two men shooting at me with handguns. Superhot's only advice for reaching, disarming and executing them was to take it one step at a time and delicately weave between the paths of their bullets. Whereas most shooters are beaten with twitch skills, slow and methodical is the path to success in Superhot.

…And honestly, that would be enough because Superhot is a blast. But hidden within its short campaign is a slice of intriguing science fiction that's both stylishly told and sneakily subversive. It's a true compliment when I can go into a game with tremendous expectations and after playing, say that I was still surprised. That's exactly the case here.

The presentation is key. Superhot's low polygon count and limited color palette give the initial impression that this is a minimal-budget indie project by first-time modelers, but damage to both objects and people are portrayed with a "shattered glass" effect that looks and sounds extremely satisfying. It's an unusual way of making Superhot cathartic without dipping into gratuitous gore, as most developers would.

Most of the levels, ranging from ambushes in back alleys to gunfights on highrises, feel ripped from generic action movies, but that's the point because Superhot is putting its own playful spin on things. I've often watched highly-coordinated, stunt-heavy fight scenes and shootouts and wished I had the skill to pull them off in a video game. Superhot, by slowing time to a near-halt whenever the player isn't moving, gives me that ability.

One particular level opened with a bartender pulling a weapon. I climbed out of the situation by grabbing a bottle, throwing it at him, knocking the gun out his hand, pulling it out of the air and then capping him. In real-time, this all occurred within the span of a second, and it was followed by a shootout won with meticulously-planned bullet-dodging. It only takes one hit to kill the player, so careful use of the slow motion is a necessity.

It's important to note that instructions in Superhot are all relayed via title cards that flash across the screen so quickly that they're practically subliminal. It seems like a neat little trick underlining how simple the game is, since the controls are easy to understand and the scenarios can all be summarized in a few words. As the game progresses, the messages seem concerned less about guiding players and more about pointlessly exerting dominance. That's where the sci-fi kicks in and Superhot becomes more than it appears to be.

As it turns out, the title cards' likeness to subliminal messages isn't just a stylish gimmick—Superhot's story actually centers on the futile battle against corporate control. The developers' most clever move is to poke fun at the obsession gamers have with the illusion of choice by presenting Superhot as a literal video game and framing its makers (i.e. themselves) as the villains. Menus are navigated via an archaic DOS interface, and chat conversations occur with an individual who's rather keen on showing something called "superhot.exe." The experience runs less than two hours, but that's enough time for it to go to some very meta places.

Don't be fooled by Superhot's simplistic visuals—they mask surprising nuance and act as a metaphor for the game as a whole. It's a short, digestible action-puzzler that hides more depth and grace in two hours than most sprawling triple-A projects can muster over twenty. What a thrill it is for something as highly anticipated as Superhot to not only live up to the hype, but to surpass it. Rating: 9 out of 10


Disclosures: This game was obtained via publisher and reviewed on the PC. Approximately two hours of play were devoted to the single-player mode, and the game was completed. There are no multiplayer modes.

Parents: As of press time, this game has been rated T by the ESRB for Violence and Drug References. It's a shooter, but the visuals are extremely stylized and the violence never looks remotely real. There's a tiny bit of harsh profanity, but I think it would pass the PG-13 test.

Deaf & Hard of Hearing: Dialog is restricted to text. Sound definitely helps players stay privy to enemy locations, but there are enough visual cues that it's perfectly possible to play the game without it.

Remappable controls: There's currently a "controls" setting in the menu that doesn't actually open, for whatever reason. They may be intending to patch remappable controls into the game at a later point, but as of press time, the feature is not available.

“But hidden within its short campaign is a slice of intriguing science fiction that’s both stylishly told and sneakily subversive.” Really? I found the campaign to be annoying and Alt-F4-ed out of a specific section that just aggravated me. I didn’t think it did anything particularly interesting or clever (not going into details, because spoilers obviously). But shows how tastes can differ. In fact I was so annoyed by this game, it’s the first time I asked for a refund on Steam. I got my money back, so no hard feelings, but I do feel it’s overhyped and if you… Read more »

Do you think the price point is too high?

There seems to be a few of us who think the extra content won’t add up to more hours of play after a few runs of the main campaign. For NZ$11.99 I can get Portal, which could be considered maybe twice as long, but Superhot sits at NZ$31.49. That’s a third of the price of a major release, which would usually have 20-30 times the length of play available.