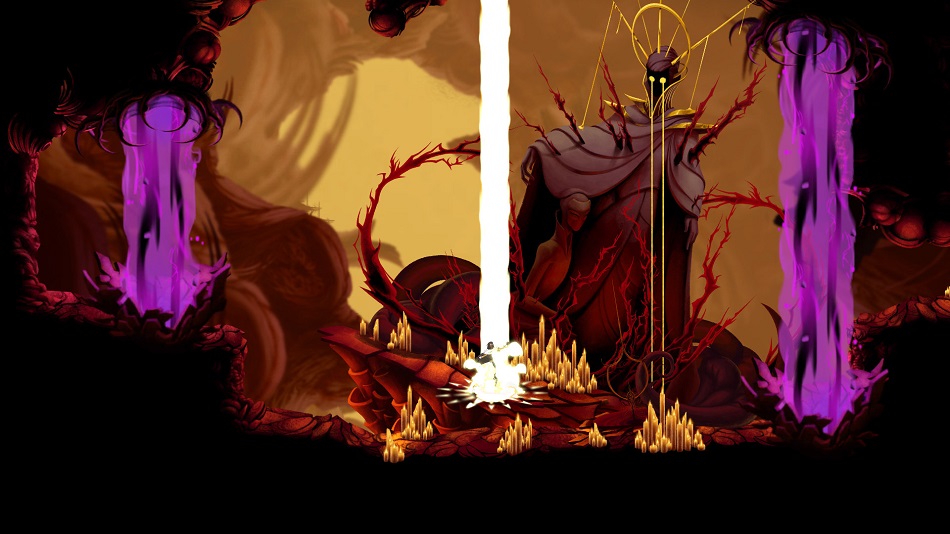 HIGH The art style and music.

LOW Absolutely everything else.

WTF Jotun was made by the same people? Are we sure…?

Although the term “roguelike” encompasses an awful lot of contemporary videogames, the most faithful to the formula are the ones that wipe the slate clean upon every death. The idea is that even if players aren’t carrying anything material into the next run, they’ve at least got wider knowledge of the game’s systems which can be applied for more successful results the next time.

Sundered sits on the exact opposite end of that spectrum. It is perhaps the first game I’ve ever played with no learning curve. A player’s success in Sundered is determined entirely by numbers, and the numbers are determined by how much time said player has invested in Sundered. No matter how good I think am at 2D action-platformers, when Sundered determines that I have come far enough, I have no choice but to stop.

Irritatingly, it has an ambitious concept behind it. It infuses procedurally-generated level design into a Metroid-like world layout. Bosses and important rooms are always in the same locations and the world always takes the same general shape, but the connecting segments change every time the player dies.

This title was developed by Thunder Lotus Games, who made a splash a couple of years ago with the Norse-themed Jotun. Their sophomore project carries many of the same traits, like the gorgeous hand-drawn visuals and stirring soundtrack. Its story takes inspiration from Lovecraft without defaulting to Cthulhu and tentacles, and its art direction finds unique ground between fantastical and futuristic. These are all qualities to be praised.

…And all of these attributes become non-factors when the senseless frustration of the game’s combat sets in. Sundered has — and I say this with much consideration and zero hyperbole — the worst enemy encounter design I’ve ever seen. At no point does the player fight just one monster, or even a handful. When they attack, they swarm the player by the dozens, all moving at lightning speed with many flying, firing projectiles, or casting spells. The robots with laser cannons can target players from several screens away. It’s utter, formless chaos.

There is, and I cannot overstate this, no strategy to clearing out hordes of enemies beyond just standing there and mindlessly mashing the attack button, and it is just one attack button, as the combat doesn’t evolve in any meaningful way, aside from the most inconvenient ranged weapon in videogame history. One wonders why the protagonist even has a regenerating shield when enemies so completely overwhelm her that it’s often impossible to escape damage for long enough to get a recharge going. Enemies also move so quickly that a limited dodge-roll doesn’t reliably create enough distance. 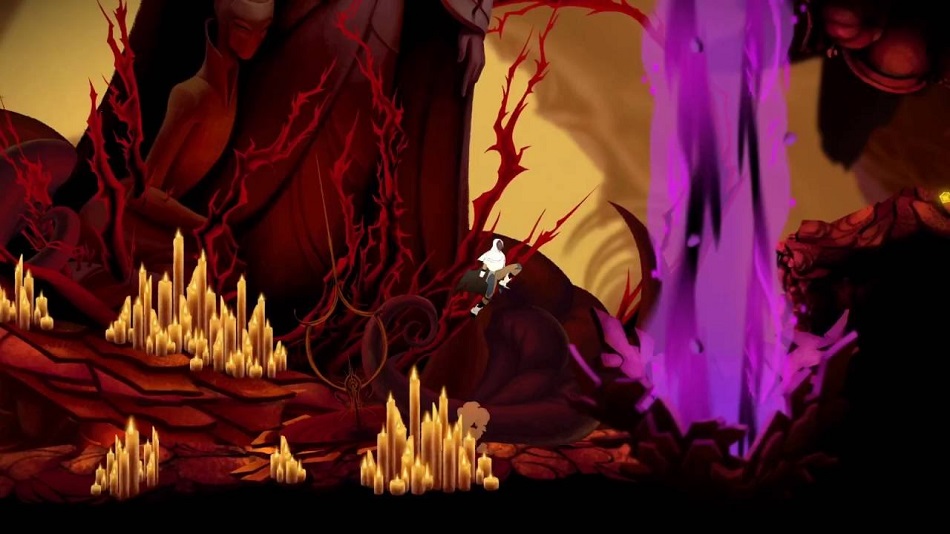 The screen often gets so crowded with monsters that I would actually lose sight of where my character was, especially when enemy attacks have the tendency to knock her around like a pinball. This becomes a major issue in the final area, which introduces some platforming of the instant-death variety – already unwelcome in a roguelike, but especially so when I don’t even know where my character is much of the time.

In light of these poor design decisions, how is Sundered completed? By tanking damage. Thunder Lotus places a major emphasis on deaths never being a waste since experience points are never lost, but the upgrade tree is as dull as they come, comprised almost entirely of passive stat boosts. Sundered’s hook is to build a character tough enough to withstand the unavoidable barrages of damage she faces every time she steps into a new area. Not to study enemy attack patterns, not to learn and master a set of mechanics, but to tenaciously hurl oneself at the wall until it begins developing cracks.

That’s bad design in and of itself, but it gels especially poorly with the roguelike elements. The lack of checkpoints is infuriating when my deaths are so rarely my own fault, and procedural generation adds nothing to this experience. The tilesets are just variations of ‘rooms full of platforms’ and the run-ups to important areas manifest as mazes on graph paper that get redrawn on every subsequent attempt. There is nothing enjoyable about retreading these areas, and players will be forced to do it constantly.

Even the bosses, a major highlight in Jotun, are terrible here. They’re stunning to look at, but they rely far too heavily on trash mobs or similarly cheap tricks, like filling an arena with bullet-hell projectiles. Aside from a robot spider midway through which is at least passable, none of these encounters provide a respite from Sundered’s chaos. Even the visually impressive scale of the bosses becomes a detriment, as the camera often zooms so far out that I can barely see my character, let alone pull off some of the tricky maneuvers necessary to reach the bosses’ weak spots.

On top of everything else, Sundered is a technical mess, because of course it is. Hitching constantly interferes with my ability to precisely control my character, the load times are unbearable, and I lost track of the number of crashes I suffered. At one point, when a boss character was supposed to briefly turn invincible in order to charge an attack, he never actually launched it, and it became impossible for me to progress further without restarting.

I didn’t finish Sundered. I completed the three major areas, but when attempting to take on the final boss, I was ordered to first complete an ultra-difficult, wave-based combat gauntlet, and encouraged to go back and grind some more when I failed. No, Sundered. I’m not going to do that. I’m going to play something that rewards skill.

I can’t recall the last time a game frustrated me as much as Sundered, and it’s not because of the game’s difficulty. It’s because it’s all so pointless. Countless deaths, endless repetition, thousands of sword swipes aimed blindly at illegible clouds of monsters… all endured with nothing gained, nothing learned, nothing I can bring with me to my next challenge. Jotun is one of my favorite indie debuts of the last few years. How its developers could follow it up with something as flatly wrongheaded as Sundered is entirely beyond my comprehension. Rating: 2.5 out of 10

Disclosures: This game is developed and published by Thunder Lotus Games. It is currently available on PlayStation 4 and PC. This copy of the game was obtained via publisher and reviewed on the PlayStation 4. Approximately 12 hours of play were devoted to the single-player mode, and the game was not completed. There are no multiplayer modes.

Parents: According to the ESRB, this game is rated Teen and contains violence and blood. Eh, it’s fine. Just a lot of stylized fantasy violence against hordes of monsters.

Deaf & Hard of Hearing Gamers: Dialogue is text-only and sound cues don’t play a vital role in the game.

Clueless review by a clueless reviewer. Sundered is fantastic…far superior to Jotun, which I found infuriating and unrewarding. I clocked in at 20 hours in five days while beating it on Normal difficulty, and loved every minute of it.