Just One More Round 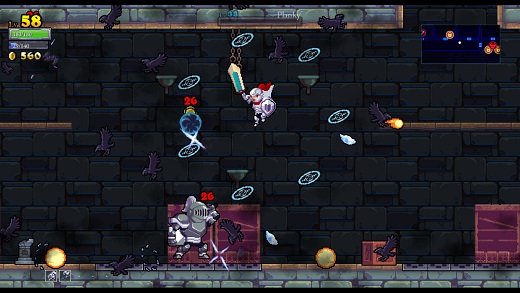 HIGH Getting an endomorph barbarian with gigantism and chakram.

LOW Accidentally picking a character with vertigo and playing upside-down.

WTF What is this? A font size for ants?

I've actually had Rogue Legacy in my Steam library for a while, but
I've been putting it off due to the promise of an eventual Vita port. That means that the game has had roughly a full year's worth of overwhelming praise to
live up to. While a few missteps prevent it from retroactively becoming one of my favorite titles of 2013, Rogue Legacy is largely what it's been pegged as:
funny, deceitfully complex, and good for both short bursts and lengthy binges alike.

Rogue Legacy is (get this!) a roguelike that adopts the basic
combat, sensibilities and gothic horror theme of Castlevania and applies them to a rather clever procedural generation engine. Upgrade trees and equipment carry
over from one life to the next, but there is permadeath. The gimmick is that each new character is a descendant of the previous one, inheriting the riches and
goals but taking on new physical attributes and conditions. Some are just goofy or only affect the game's aesthetic (like colorblindness or glaucoma) while others,
particularly relating to weight and height, can greatly affect performance in battle.

There are three choices of character given at the start of every new
attempt so it's not overly restrictive, but I was still frequently forced to settle for playstyles outside of my comfort zone. Obviously, this is the point of
Rogue Legacy: to master a broad understanding of the game's mechanics while still being given a unique experience every round.

The actual procedural generation system is pretty phenomenal, to the point that a typical dungeon layout in Rogue Legacy is comparable in quality to an average
Castlevania. What's impressive is the variety of it all. The controls and combat are standard, but each run is awash with hidden areas,
optional mini-bosses and secret items only accessible by completing certain conditions (like clearing a room without taking any damage). Rogue Legacy
requires a lot of roaming and a lot of grinding, but it'll be a while before any player sees all of the variants. Knowing that upgrades carry over from
one character to the next makes it feel like trying and dying isn't a waste of time.

The game is also helped by a strong sense of geography.
Players are always dropped into a castle-themed starting area and then gradually push their way to three other regions, each always located in the same
general direction. The objective is to hunt down a major boss in each of the four major levels, and being well-oriented even when dealing with a randomly
-designed dungeon helps speed this process up.

Also helpful is the option to carry exploration progress over from one life to another at the cost
of 40% of the loot gained during that run. In particular, whenever I died against a boss, being able to instantly warp back without having to retrace my
steps through the whole dungeon was a huge relief, especially because those were the moments when I temporarily stopped caring about farming for gold.

Unfortunately, the bosses themselves are my one major complaint about Rogue Legacy.
They're cheap, unimaginative and downright lazy in design, over-reliant on trash mobs and projectile spamming without being challenging in clever ways.
There are only a handful of them, but since hunting them down is the entire point of the game, they're an anticlimactic conclusion to every major area.
For example, one is just a blob of goo that duplicates itself and spawns an enemy caster every time it's damaged.

The absolute nadir is the final boss. While it's possible to develop vague strategies (however silly) against the rest of
Rogue Legacy's bosses, the final encounter is a massive brick wall for anyone who's even slightly under-leveled.
Maybe the Dark Souls games have spoiled me when it comes to balancing, but the final enemy here can spam overpowered,
screen-filling attacks with no consequence, to the point that the only way to beat it seems to be grinding to oblivion.
It's nearly the worst note that this otherwise great game could have ended on.

On a technical level, it's easy to see that the Vita port is pretty terrible,
even without having played the original. The font is way too small, the game crashed for me on several occasions, and the cross-save feature between
PlayStation consoles is finicky, since Rogue Legacy seems to lose its connection every time the Vita is put into sleep mode.
I guess I should be thankful that a cloud save feature has been implemented at all, though, considering that several of my manual saves went corrupt during my
time with it.

That Rogue Legacy got a lousy port is particularly damning, because the game is otherwise perfectly
suited to the handheld, with an average round lasting no more than ten minutes but with depth encouraging much longer sessions if possible.
I can't ignore the awful boss design, but most of what's been said about Rogue Legacy by its admirers is on the mark,
and I hope its migration to Sony platforms gives more people a chance to play it. Rating: 7.5 out of 10

Disclosures: This game was obtained via publisher and reviewed on the PlayStation Vita. Approximately 22 hours of play
were devoted to the single-player mode, and the game was completed. There are no multiplayer modes.

Parents: According to the
ESRB, this game contains fantasy violence and crude humor.
As the descriptor implies, it's full of bloodless action and some PG-level humor. Nothing to be too worried about.

Deaf & Hard of Hearing: All dialog is subtitled, and sound cues don't really play a significant role in the game.
I spent most of my play time listening to music and podcasts and I was fine.