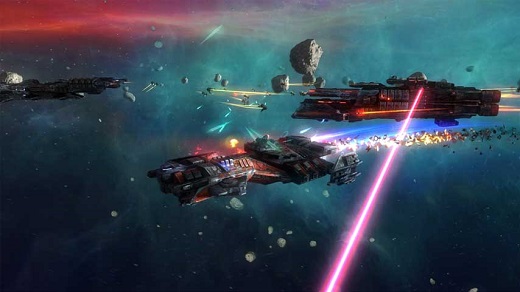 LOW Escorting a friendly flying through clear airspace in a zigzag for no reason.

WTF Getting stuck when moving on a third axis would've gotten me out.

Rebel Galaxy is not a space sim.

I say this for the game's benefit, because anyone expecting it to supplant Elite Dangerous is going in with the wrong expectations. In fact, actually exploring is the least rewarding part of the whole experience.

There are 14 solar systems to traverse in Rebel Galaxy, and they have virtually no distinguishable attributes between them; they could be randomly generated for all I know. I've spent a couple dozen hours with the game and I couldn't explain the difference between the Telluride and Dionysus systems, other than the fact that one of them has an objective marker and one doesn't.

This lack of quality exploration may be a failing of new indie studio Double Damage Games, or it may be that focusing on it wasn't their intent. Regardless, my point is to avoid going in with the wrong idea—Rebel Galaxy is not a holdover for Star Citizen. It's essentially an overstretched naval combat game from the creators of Torchlight, carrying over some of its notable attributes and happening in space.

I call it naval combat partly because movement is restricted to a 2D plane, and partly because the combat leans heavily on the use of broadside cannons. In pitting one capital ship against another, a player's primary weapon fires at an angle perpendicular to the vessel's direction, meaning that positioning and speed are just as important in combat as raw firepower—it lends the adventure a quality akin to 18th century naval battles. Other games have dabbled with similar mechanics to rousing effect, and it's satisfying here.

Players can also equip their ships with supplemental turrets that are used to bring down the smaller, faster enemy craft that are allowed to break the 2D plane. It's even possible to switch control between any of the weapon systems while AI scripts handle the rest, but since the broadsides rely so heavily on the position of the vessel, I found myself using those about 98% of the time. So, save for the few occasions in which the campaign mixes up the objectives a bit, most battles played out for me in exactly the same manner.

Rebel Galaxy's combat is the sort of thing that I could see working beautifully as a small piece of a larger machine, but it's about the only trick up this particular game's sleeve, and everything else feels disappointingly undercooked.

For example, there are hints that Rebel Galaxy wants to be a space trading game, with a large number of products being sold in many stations at varying rates, but it's considerably less efficient than simply completing quests. It's duller, too, given how long it takes to get from place to place. The process was so slow, I was frequently checking my email while warping.

It's easier to tolerate the extensive travel when there's a battle at the end of the line, but the mercenary quests aren't that great either. They all draw from the same handful of objectives: bounties, deliveries, rescues and the occasional escort missions that players will quickly learn never to accept, given how inept the friendly AI pathfinding tends to be. (Seriously, watch one of these idiots try to navigate through a cluttered asteroid field.) Since Rebel Galaxy comes from the same minds that brought us Torchlight, it shouldn't be difficult to imagine that a lot of grinding is necessary to keep the player's ship up to snuff. Sadly, it's a far bigger grind than the one-note gameplay warrants.

On a positive note, I do somewhat enjoy Rebel Galaxy's "bikers in space" vibe, punctuated by a soundtrack full of distinctly American rock songs that could all double for the Sons of Anarchy theme. But while there's some immediate charm in the aesthetic, there's no substance to this fictional universe, and the facade breaks down within an hour. Most of the spoken dialog is limited to a small handful of threats repeated endlessly by the enemy ships, and there's very little visual evidence that we're exploring an expansive galaxy, particularly when every damn bartender at every damn station is the exact same bald Australian guy.

Overall, the major issue with Rebel Galaxy is that its scope feels unjustified. At no point was I doing anything other than chasing an objective marker or deciding on the next objective marker to chase. While the game spans 14 systems, it easily could have been restricted to one. In fact, a smaller scale probably would have been preferable; I'd have appreciated a reduction in the number of times an already-slow jump was brought to a halt because my ship detected some floating debris that I wouldn't have hit anyway.

I don't want to make it sound like Rebel Galaxy is completely without value. There's excitement in the precision and concentration needed to punch holes in an enemy dreadnaught's hull, and the ongoing thrill of purchasing new ships and seeing how the upgrades subtly influence one's strengths in combat isn't for nothing. That said, the game isn't deep or diverse enough to justify the 20-plus hours players can expect to invest before reaching the end. A tighter, narrower scope would have elevated Rebel Galaxy beyond being the sort of mild distraction derived from marathoning a TV show. Rating: 6.0 out of 10


Disclosures: This game was obtained via publisher and reviewed on the PC. Approximately 27 hours were devoted to the single-player mode, and the game was completed. There are no multiplayer modes.

Parents: According to the ESRB, this game contains violence, language and drug reference (singular). It's just a lot of bloodless spaceship action with a bit of PG-level profanity sprinkled about. Honestly, even the "Teen" rating feels like a stretch to me.

Deaf and Hard of Hearing: Subtitles are available for all dialog, and visual cues make it easy to follow what's happening without sound. No problems whatsoever.